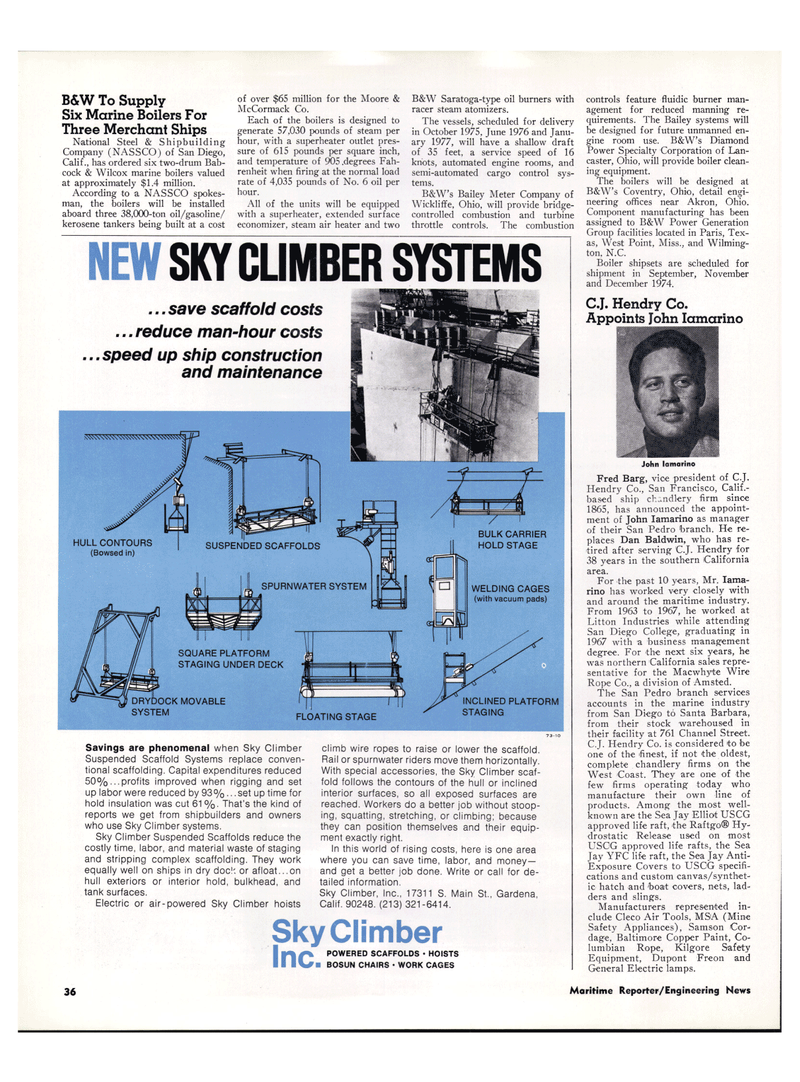 According to a NASSCO spokes- man, the boilers will be installed aboard three 38,000-ton oil/gasoline/ kerosene tankers being built at a cost of over $65 million for the Moore &

Each of the boilers is designed to generate 57,030 pounds of steam per hour, with a superheater outlet pres- sure of 615 pounds per square inch, and temperature of 905 .degrees Fah- renheit when firing at the normal load rate of 4,035 pounds of No. 6 oil per hour.

All of the units will be equipped with a superheater, extended surface economizer, steam air heater and two

The vessels, scheduled for delivery in October 1975, June 1976 and Janu- ary 1977, will have a shallow draft of 35 feet, a service speed of 16 knots, automated engine rooms, and semi-automated cargo control sys- tems.

The boilers will be designed at

Component manufacturing has been assigned to B&W Power Generation

Boiler shipsets are scheduled for shipment in September, November and December 1974.

Hendry Co., San Francisco, Calif.- based ship chandlery firm since 1865, has announced the appoint- ment of John Iamarino as manager of their San Pedro branch. He re- places Dan Baldwin, who has re- tired after serving C.J. Hendry for 38 years in the southern California area.

For the past 10 years, Mr. Iama- rino has worked very closely with and around the maritime industry.

San Diego College, graduating in 1967 with a business management degree. For the next six years, he was northern California sales repre- sentative for the Macwhyte Wire

Rope Co., a division of Amsted.

The San Pedro branch services accounts in the marine industry from San Diego to Santa Barbara, from their stock warehoused in their facility at 761 Channel Street.

C.J. Hendry Co. is considered to be one of the finest, if not the oldest, complete chandlery firms on the

West Coast. They are one of the few firms operating today who manufacture their own line of products. Among the most well- known are the Sea Jay Elliot USCG approved life raft, the Raftgo® Hy- drostatic Release used on most

Savings are phenomenal when Sky Climber

Suspended Scaffold Systems replace conven- tional scaffolding. Capital expenditures reduced 50%...profits improved when rigging and set up labor were reduced by 93%.. .set up time for hold insulation was cut 61 %. That's the kind of reports we get from shipbuilders and owners who use Sky Climber systems.

With special accessories, the Sky Climber scaf- fold follows the contours of the hull or inclined interior surfaces, so all exposed surfaces are reached. Workers do a better job without stoop- ing, squatting, stretching, or climbing; because they can position themselves and their equip- ment exactly right.

In this world of rising costs, here is one area where you can save time, labor, and money— and get a better job done. Write or call for de- tailed information.