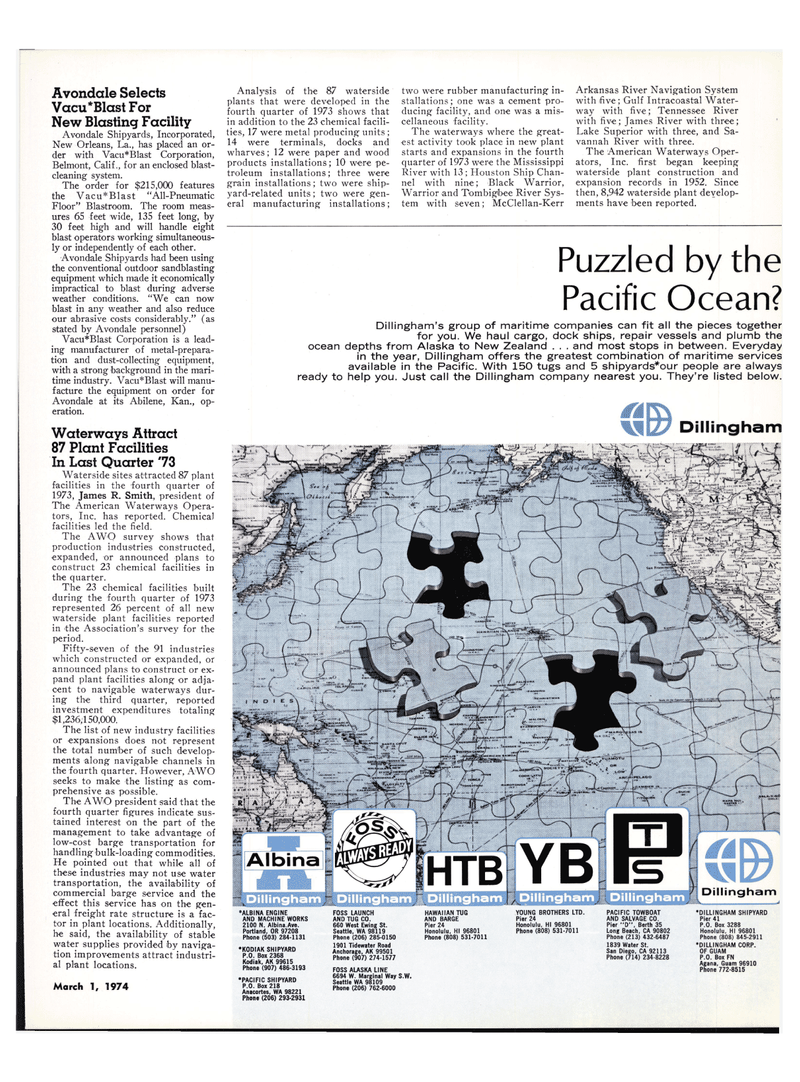 New Orleans, La., has placed an or- der with Vacu*Blast Corporation,

Avondale Shipyards had been using the conventional outdoor sandblasting equipment which made it economically impractical to blast during adverse weather conditions. "We can now blast in any weather and also reduce our abrasive costs considerably." (as stated by Avondale personnel)

Vacu*Blast Corporation is a lead- ing manufacturer of metal-prepara- tion and dust-collecting equipment, with a strong background in the mari- time industry. Vacu*Blast will manu- facture the equipment on order for

The AWQ survey shows that production industries constructed, expanded, or announced plans to construct 23 chemical facilities in the quarter.

The 23 chemical facilities built during the fourth quarter of 1973 represented 26 percent of all new waterside plant facilities reported in the Association's survey for the period.

Fifty-seven of the 9'1 industries which constructed or expanded, or announced plans to construct or ex- pand plant facilities along or adja- cent to navigable waterways dur- ing the third quarter, reported investment expenditures totaling $1,236,150,000.

The list of new industry facilities or expansions does not represent the total number of such develop- ments along navigable channels in the fourth quarter. However, A WO seeks to make the listing as com- prehensive as -possible.

The AWiO president said that the fourth quarter figures indicate sus- tained interest on the part of the management to take advantage of low-cost barge transportation for handling bulk-loading commodities.

He pointed out that while all of these industries may not use water transportation, the availability of commercial barge service and the effect this service has on the gen- eral freight rate structure is a fac- tor in plant locations. Additionally, he said, the availability of stable water supplies provided by naviga- tion improvements attract industri- al plant locations.

Dillingham's group of maritime companies can fit all the pieces together for you. We haul cargo, dock ships, repair vessels and plumb the ocean depths from Alaska to New Zealand . . . and most stops in between. Everyday in the year, Dillingham offers the greatest combination of maritime services available in the Pacific. With 150 tugs and 5 shipyards*our people are always ready to help you. Just call the Dillingham company nearest you. They're listed below.