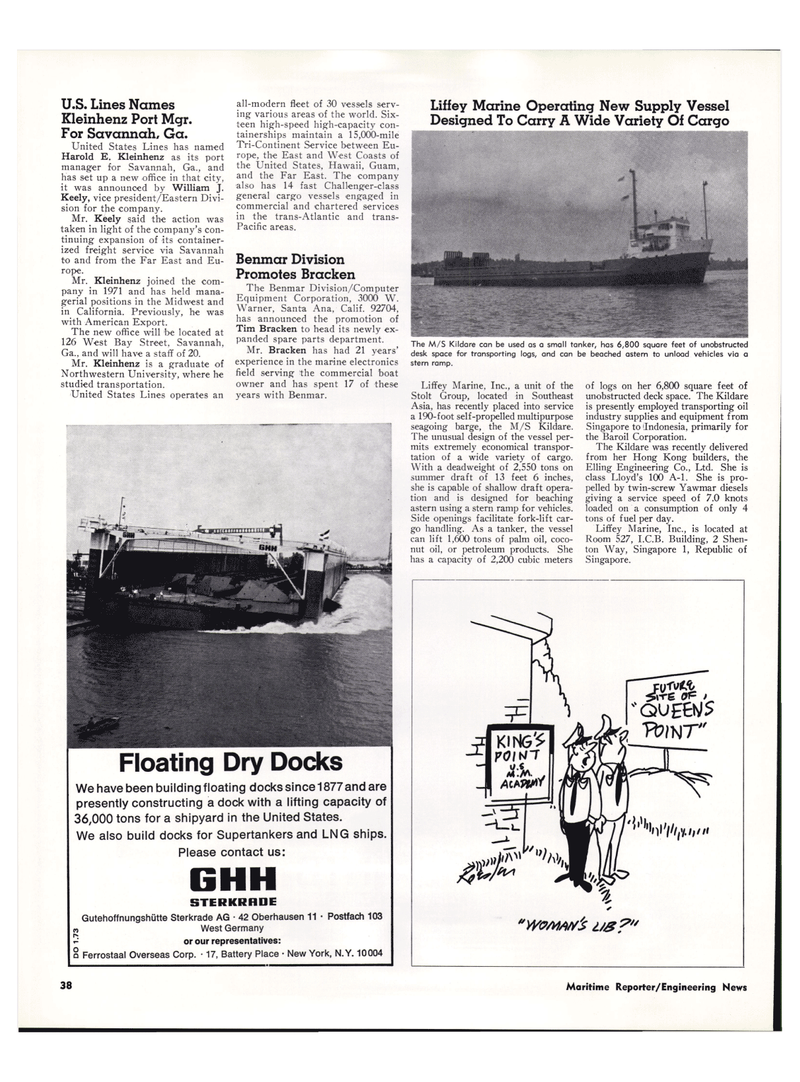 Designed To Carry A Wide Variety Of Cargo

The M/S Kildare can be used as a small tanker, has 6,800 square feet of unobstructed desk space for transporting logs, and can be beached astern to unload vehicles via a stern ramp.

Harold E. Kleinhenz as its port manager for Savannah, Ga., and has set up a new office in that city, it was announced by William J.

Mr. Keely said the action was taken in light of the company's con- tinuing expansion of its container- ized freight service via Savannah to and from the Far East and Eu- rope.

Mr. Kleinhenz joined the com- pany in 1971 and has held mana- gerial positions in the Midwest and in California. Previously, he was with American Export.

The new office will be located at 126 West Bay Street, Savannah,

Mr. Kleinhenz is a graduate of

Northwestern University, where he studied transportation.

Tri-Continent Service between Eu- rope, the East and West Coasts of the United States, Hawaii, Guam, and the Far East. The company also has 14 fast Challenger-class general cargo vessels engaged in commercial and chartered services in the trans-Atlantic and trans-

Warner, Santa Ana, Calif. 92704, has announced the promotion of

Mr. Bracken has had 21 years' experience in the marine electronics field serving the commercial boat owner and has spent 17 of these years with Benmar.

Liffey Marine, Inc., a unit of the

The unusual design of the vessel per- mits extremely economical transpor- tation of a wide variety of cargo.

With a deadweight of 2,550 tons on summer draft of 13 feet 6 inches, she is capable of shallow draft opera- tion and is designed for beaching astern using a stern ramp for vehicles.

Side openings facilitate fork-lift car- go handling. As a tanker, the vessel can lift 1,600 tons of palm oil, coco- nut oil, or petroleum products. She has a capacity of 2,200 cubic meters of logs on her 6,800 square feet of unobstructed deck space. The Kildare is presently employed transporting oil industry supplies and equipment from

Singapore to (Indonesia, primarily for the Baroil Corporation.

The Kildare was recently delivered from her Hong Kong builders, the

Elling Engineering Co., Ltd. She is class Lloyd's 100 A-l. She is pro- pelled by twin-screw Yawmar diesels giving a service speed of 7.0 knots loaded on a consumption of only 4 tons of fuel per day.

Liffey Marine, Inc., is located at

We have been building floating docks since 1877 and are presently constructing a dock with a lifting capacity of 36,000 tons for a shipyard in the United States.

We also build docks for Supertankers and LNG ships.