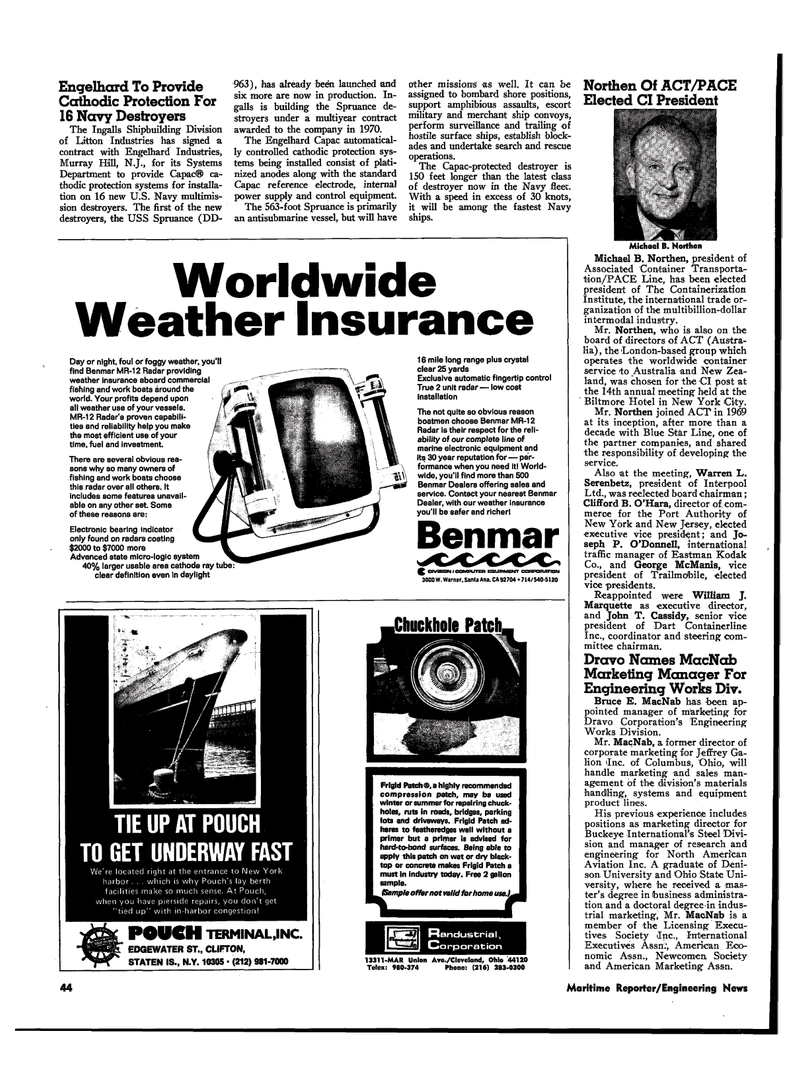 The Ingalls Shipbuilding Division of Litton Industries has signed a contract with Engelhard Industries,

Murray Hill, N.J., for its Systems

Department to provide Capac® ca- thodic protection systems for installa- tion on 16 new U.S. Navy multimis- sion destroyers. The first of the new destroyers, the USS Spruance (DD- 963), has already been launched and six more are now in production. In- galls is building the Spruance de- stroyers under a multiyear contract awarded to the company in 1970.

The 563-foot Spruance is primarily an antisubmarine vessel, but will have other missions as well. It can be assigned to bombard shore positions, support amphibious assaults, escort military and merchant ship convoys, perform surveillance and trailing of hostile surface ships, establish block- ades and undertake search and rescue operations.

The Capac-protected destroyer is 150 feet longer than the latest class of destroyer now in the Navy fleer.

With a speed in excess of 30 knots, it will be among the fastest Navy ships.

Day or night, foul or foggy weather, you'll find Benmar MR-12 Radar providing weather insurance aboard commercial fishing and work boats around the world. Your profits depend upon all weather use of your vessels.

MR-12 Radar's proven capabili- ties and reliability help you make the most efficient use of your time, fuel and investment.

There are several obvious rea- sons why so many owners of fishing and work boats choose this radar over all others. It includes some features unavail- able on any other set. Some of these reasons are:

The not quite so obvious reason boatmen choose Benmar MR-12

Radar is their respect for the reli- ability of our complete line of marine electronic equipment and its 30 year reputation for—per- formance when you need itl World- wide, you'll find more than 500

Dealer, with our weather insurance you'll be safer and richerl

TIE UP AT POUCH

TO GET UNDERWAY FAST

We're located right at the entrance to New York harbor . . . which is why Pouch's lay berth facilities make so much sense. At Pouch, when you have pierside repairs, you don't get "tied up" with in-harbor congestion!

STATEN IS., N.Y. 10305 • (212) 981-7000 .Chuckhole Patch, [Frigid Patch®,a highly recommended compression patch, may be used winter or summer for repairing chuck-holm, ruts in roads, bridges, parking lots and driveways. Frigid Patch ad-hem to featheredges well without a primer but a primer is advised for hard-to-bond surfaces. Being able to apply this patch on wet or dry black-top or concrete makes Frigid Patch a must in industry today. Free 2 gallon sample.

Michael B. Northen, president of

Associated Container Transporta- tion/PACE Line, has been elected president of The Containerization

Institute, the international trade or- ganization of the multibillion-dollar intermodal industry.

Mr. Northen, who is also on the board of directors of ACT (Austra- lia) , the London-based group which operates the worldwide container service to Australia and New Zea- land, was chosen for the CI post at the 14th annual meeting held at the

Mr. Northen joined ACT in 1969 at its inception, after more than a decade with Blue Star Line, one of the partner companies, and shared the responsibility of developing the service.

Also at the meeting, Warren L.

Ltd., was reelected board chairman;

Clifford B. O'Hara, director of com- merce for the Port Authority of

Bruce E. MacNab has been ap- pointed manager of marketing for

His previous experience includes positions as marketing director for