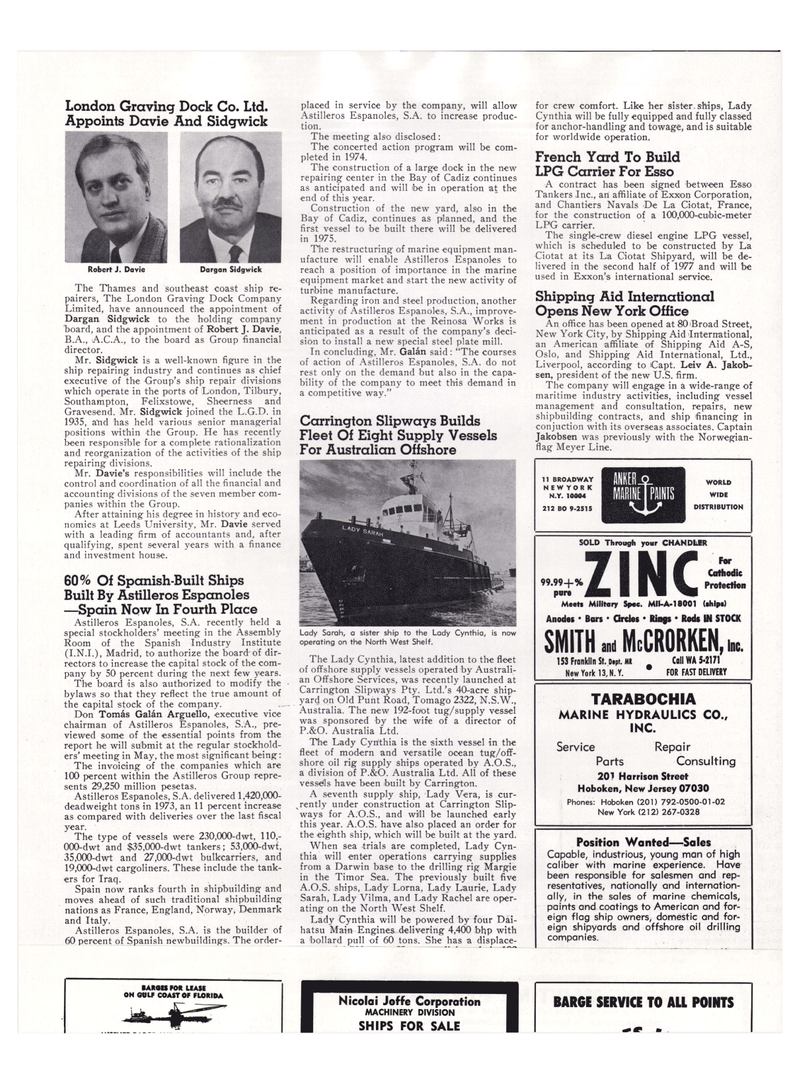 The Thames and southeast coast ship re- pairers, The London Graving Dock Company

Limited, have announced the appointment of

Dargan Sidgwick to the holding company board, and the appointment of Robert J. Davie,

B.A., A.C.A., to the board as Group financial director.

Mr. Sidgwick is a well-known figure in the ship repairing industry and continues as chief executive of the Group's ship repair divisions which operate in the ports of London, Tilbury,

Gravesend. Mr. Sidgwick joined the L.G.D. in 1935, and has held various senior managerial positions within the Group. He has recently been responsible for a complete rationalization and reorganization of the activities of the ship repairing divisions.

Mr. Davie's responsibilities will include the control and coordination of all the financial and accounting divisions of the seven member com- panies within the Group.

After attaining his degree in history and eco- nomics at Leeds University, Mr. Davie served with a leading firm of accountants and, after qualifying, spent several years with a finance and investment house. 60% Of Spanish-Built Ships

Room of the Spanish Industry Institute (I.N.I.), Madrid, to authorize the board-of di- rectors to increase the capital stock of the com- pany by 50 percent during the next few years.

The board is also authorized to modify the bylaws so that they reflect the true amount of the capital stock of the company.

Don Tomas Galan Arguello, executive vice chairman of Astilleros Espanoles, S.A., pre- viewed some of the essential points from the report he will submit at the regular stockhold- ers' meeting in May, the most significant being:

The invoicing of the companies which are 100 percent within the Astilleros Group repre- sents 29,250 million pesetas.

Astilleros Espanoles, S.A. delivered 1,420,000- deadweight tons in 1973, an 11 percent increase as compared with deliveries over the last fiscal year.

Spain now ranks fourth in shipbuilding and moves ahead of such traditional shipbuilding nations as France, England, Norway, Denmark and Italy.

Astilleros Espanoles, S.A. is the builder of 60 percent of Spanish newbuildings. The order- placed in service by the company, will allow

The concerted action program will be com- pleted in 1974.

The construction of a large dock in the new repairing center in the Bay of Cadiz continues as anticipated and will be in operation at the end of this year.

Construction of the new yard, also in the

Bay of Cadiz, continues as planned, and the first vessel to be built there will be delivered in 1975.

Regarding iron and steel production, another activity of Astilleros Espanoles, S.A., improve- ment in production at the Reinosa Works is anticipated as a result of the company's deci- sion to install a new special steel plate mill.

In concluding, Mr. Galan said: "The courses of action of Astilleros Espanoles, S.A. do not rest only on the demand but also in the capa- bility of the company to meet this demand in a competitive way."

Lady Sarah, a sister ship to the Lady Cynthia, is now operating on the North West Shelf.

The Lady Cynthia, latest addition to the fleet of offshore supply vessels operated by Australi- an Offshore Services, was recently launched at

Australia. The new 192-foot tug/supply vessel was sponsored by the wife of a director of

The Lady Cynthia is the sixth vessel in the fleet of modern and versatile ocean tug/off- shore oil rig supply ships operated by A.O.S., a division of P.&O. Australia Ltd. All of these vessels have been built by Carrington.

A seventh supply ship, Lady Vera, is cur- rently under construction at Carrington Slip- ways for A.O.S., and will be launched early this year. A.O.S. have also placed an order for the eighth ship, which will be built at the yard.

When sea trials are completed, Lady Cyn- thia will enter operations carrying supplies from a Darwin base to the drilling rig Margie in the Timor Sea. The previously built five

Lady Cynthia will be powered by four Dai- hatsu Main Engines delivering 4,400 bhp with a bollard pull of 60 tons. She has a displace- for crew comfort. Like her sister, ships, Lady

Cynthia will be fully equipped and fully classed for anchor-handling and towage, and is suitable for worldwide operation.

A contract has been signed between Esso

Tankers Inc., an affiliate of Exxon Corporation, and Chantiers Navals De La Ciotat, France, for the construction of a 100,000-cubic-meter

The single-crew diesel engine LPG vessel, which is scheduled to be constructed by La

Ciotat at its La Ciotat Shipyard, will be de- livered in the second half of 1977 and will be used in Exxon's international service.

An office has been opened at 80 Broad Street,

Liverpool, according to Capt. Leiv A. Jakob- sen, president of the new U.S. firm.

The company will engage in a wide-range of maritime industry activities, including vessel management and consultation, repairs, new shipbuilding contracts, and ship financing in conduction with its overseas associates. Captain

Jakobsen was previously with the Norwegian- flag Meyer Line. 11 BROADWAY

SOLD Through your CHANDLER

Capable, industrious, young man of high caliber with marine experience. Have been responsible for salesmen and rep- resentatives, nationally and internation- ally, in the sales of marine chemicals, paints and coatings to American and for- eign flag ship owners, domestic and for- eign shipyards and offshore oil drilling companies. •ARSES FOR LEASE

BARGE SERVICE TO ALL POINTS