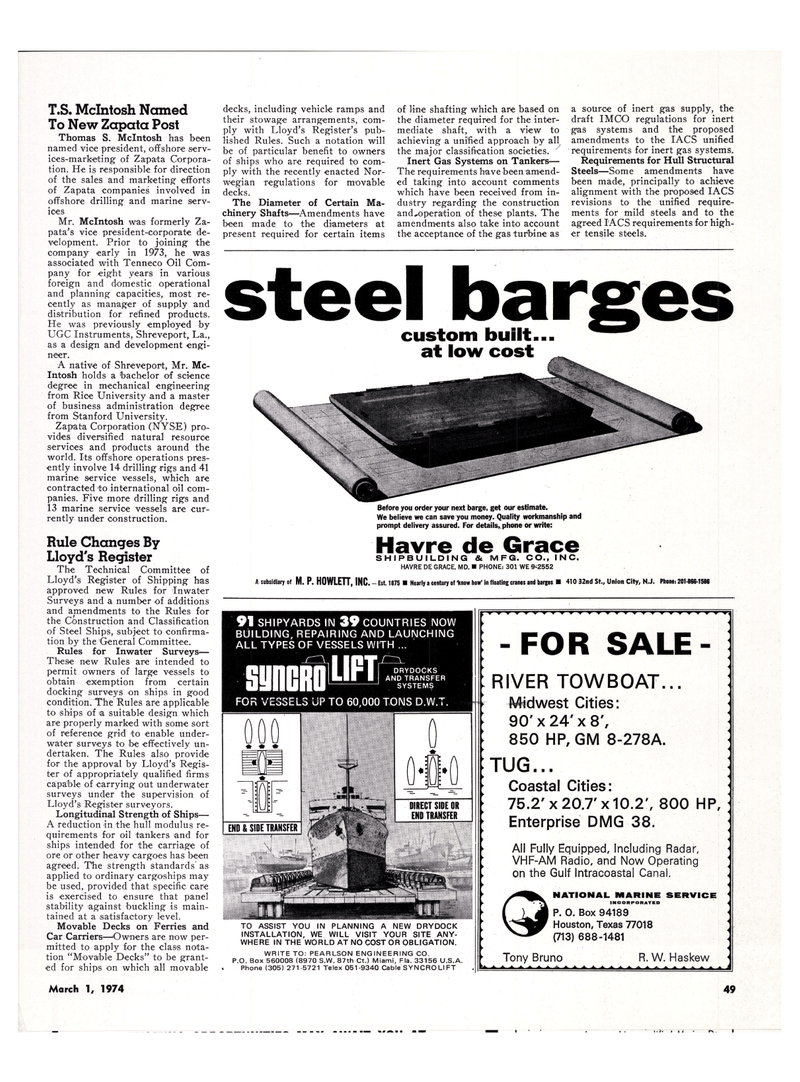 Thomas S. Mcintosh has been named vice president, offshore serv- ices-marketing of Zapata Corpora- tion. He is responsible for direction of the sales and marketing- efforts of Zapata companies involved in offshore drilling and marine serv- ices

Mr. Mcintosh was formerly Za- pata's vice president-corporate de- velopment. Prior to joining the company early in 1973, he was associated with Tenneco Oil Com- pany for eight years in various foreign and domestic operational and planning capacities, most re- cently as manager of supply and distribution for refined products.

He was previously employed by

A native of Shreveport, Mr. Mc- intosh holds a bachelor of science degree in mechanical engineering from Rice University and a master of business administration degree from Stanford University.

The Technical Committee of

Lloyd's Register of Shipping has approved new Rules for Inwater

Surveys and a number of additions and amendments to the Rules for the Construction and Classification of Steel Ships, subject to confirma- tion by the General Committee.

These new Rules are intended to permit owners of large vessels to obtain exemption from certain docking surveys on ships in good condition. The Rules are applicable to ships of a suitable design which are properly marked with some sort of reference grid to enable under- water surveys to be effectively un- dertaken. The Rules also provide for the approval by Lloyd's Regis- ter of appropriately qualified firms capable of carrying out underwater surveys under the supervision of

A reduction in the hull modulus re- quirements for oil tankers and for ships intended for the carriage of ore or other heavy cargoes has been agreed. The strength standards' as applied to ordinary cargoships may be used, provided that specific care is exercised to ensure that panel stability against buckling is main- tained at a satisfactory level.

Movable Decks on Ferries and

Car Carriers—Owners are now per- mitted to apply for the class nota- tion "Movable Decks" to be grant- ed for ships on which all movable decks, including vehicle ramps and their stowage arrangements, com- ply with Lloyd's Register's pub- lished Rules. Such a notation will be of particular benefit to owners of ships who are required to com- ply with the recently enacted Nor- wegian regulations for movable decks.

The Diameter of Certain Ma- chinery Shafts—Amendments have been made to the diameters at present required for certain items of line shafting which are based on the diameter required for the inter- mediate shaft, with a view to achieving a unified approach by all the major classification societies.

Steels—Some amendments have been made, principally to achieve alignment with the proposed IACS revisions to the unified require- ments for mild steels and to the agreed IACS requirements for high- er tensile steels.

Before you order your next barge, get our estimate.

We believe we can save you money. Quality workmanship and prompt delivery assured. For details,, phone or write: -FOR SALE-

All Fully Equipped, Including Radar,

VHF-AM Radio, and Now Operating on the Gulf Intracoastal Canal.

ALL TYPES OF VESSELS WITH ... syncRDLIPT #

TO ASSIST YOU IN PLANNING A NEW DRYDOCK

INSTALLATION, WE WILL VISIT YOUR SITE ANY-

WHERE IN THE WORLD AT NO COST OR OBLIGATION.