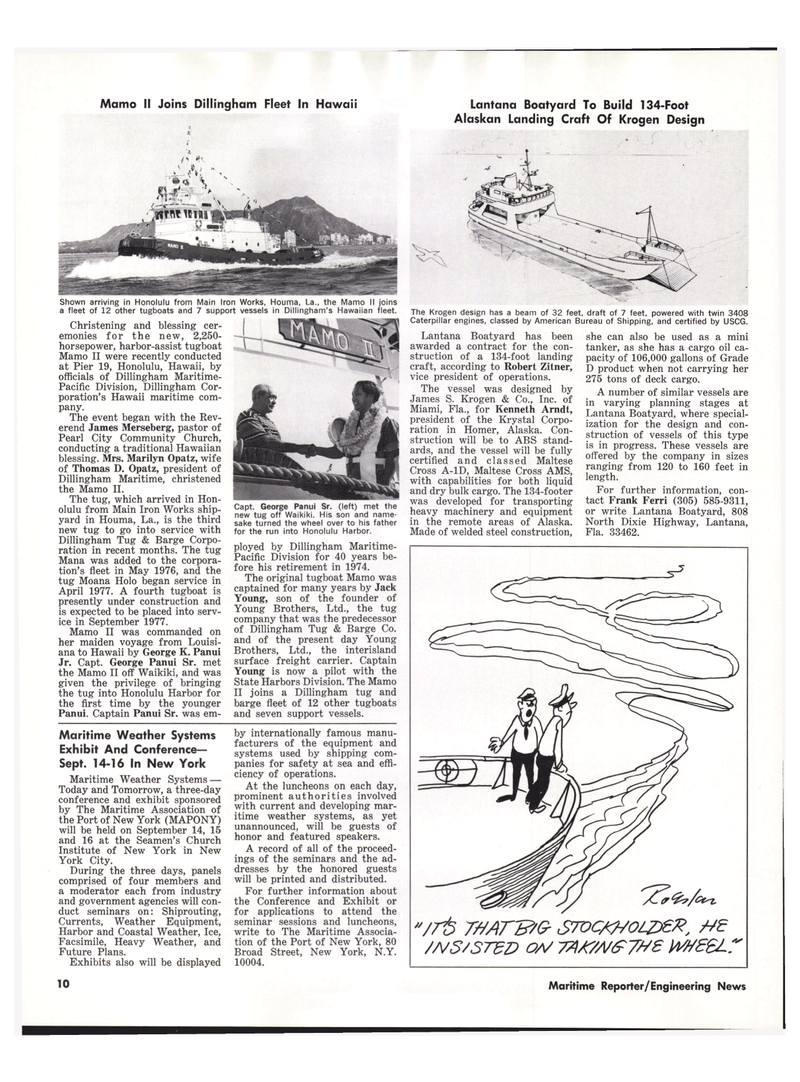 Today and Tomorrow, a three-day conference and exhibit sponsored by The Maritime Association of the Port of New York (MAPONY) will be held on September 14, 15 and 16 at the Seamen's Church

Institute of New York in New

During the three days, panels comprised of four members and a moderator each from industry and government agencies will con- duct seminars on: Shiprouting,

Exhibits also will be displayed

VOITH by internationally famous manu- facturers of the equipment and systems used by shipping com- panies for safety at sea and effi- ciency of operations.

At the luncheons on each day, prominent authorities involved with current and developing mar- itime weather systems, as yet unannounced, will be guests of honor and featured speakers.

A record of all of the proceed- ings of the seminars and the ad- dresses by the honored guests will be printed and distributed.

For further information about the Conference and Exhibit or for applications to attend the seminar sessions and luncheons, write to The Maritime Associa- tion of the Port of New York, 80

Lantana Boatyard has been awarded a contract for the con- struction of a 134-foot landing craft, according to Robert Zitner, vice president of operations.

The vessel was designed by

Miami, Fla., for Kenneth Arndt, president of the Krystal Corpo- ration in Homer, Alaska. Con- struction will be to ABS stand- ards, and the vessel will be fully certified and classed Maltese

Cross A-1D, Maltese Cross AMS, with capabilities for both liquid and dry bulk cargo. The 134-footer was developed for transporting heavy machinery and equipment in the remote areas of Alaska.

Made of welded steel construction, she can also be used as a mini tanker, as she has a cargo oil ca- pacity of 106,000 gallons of Grade

D product when not carrying her 275 tons of deck cargo.

A number of similar vessels are in varying planning stages at

Lantana Boatyard, where special- ization for the design and con- struction of vessels of this type is in progress. These vessels are offered by the company in sizes ranging from 120 to 160 feet in length.

Shown arriving in Honolulu from Main Iron Works, Houma, La., the Mamo II joins a fleet of 12 other tugboats and 7 support vessels in Dillingham's Hawaiian fleet. The Krogen design has a beam of 32 feet, draft of 7 feet, powered with twin 3408

Caterpillar engines, classed by American Bureau of Shipping, and certified by USCG. Christening and blessing cer- emonies for the new, 2,250- horsepower, harbor-assist tugboat

The event began with the Rev- erend James Merseberg, pastor of

The tug, which arrived in Hon- olulu from Main Iron Works ship- yard in Houma, La., is the third new tug to go into service with

Mana was added to the corpora- tion's fleet in May 1976, and the tug Moana Holo began service in

April 1977. A fourth tugboat is presently under construction and is expected to be placed into serv- ice in September 1977.

Mamo II was commanded on her maiden voyage from Louisi- ana to Hawaii by George K. Panui

Jr. Capt. George Panui Sr. met the Mamo II off Waikiki, and was given the privilege of bringing the tug into Honolulu Harbor for the first time by the younger

Capt. George Panui Sr. (left) met the new tug off Waikiki. His son and name- sake turned the wheel over to his father for the run into Honolulu Harbor. ployed by Dillingham Maritime-

Pacific Division for 40 years be- fore his retirement in 1974.

The original tugboat Mamo was captained for many years by Jack

Young, son of the founder of

Young Brothers, Ltd., the tug company that was the predecessor of Dillingham Tug & Barge Co. and of the present day Young

Young is now a pilot with the