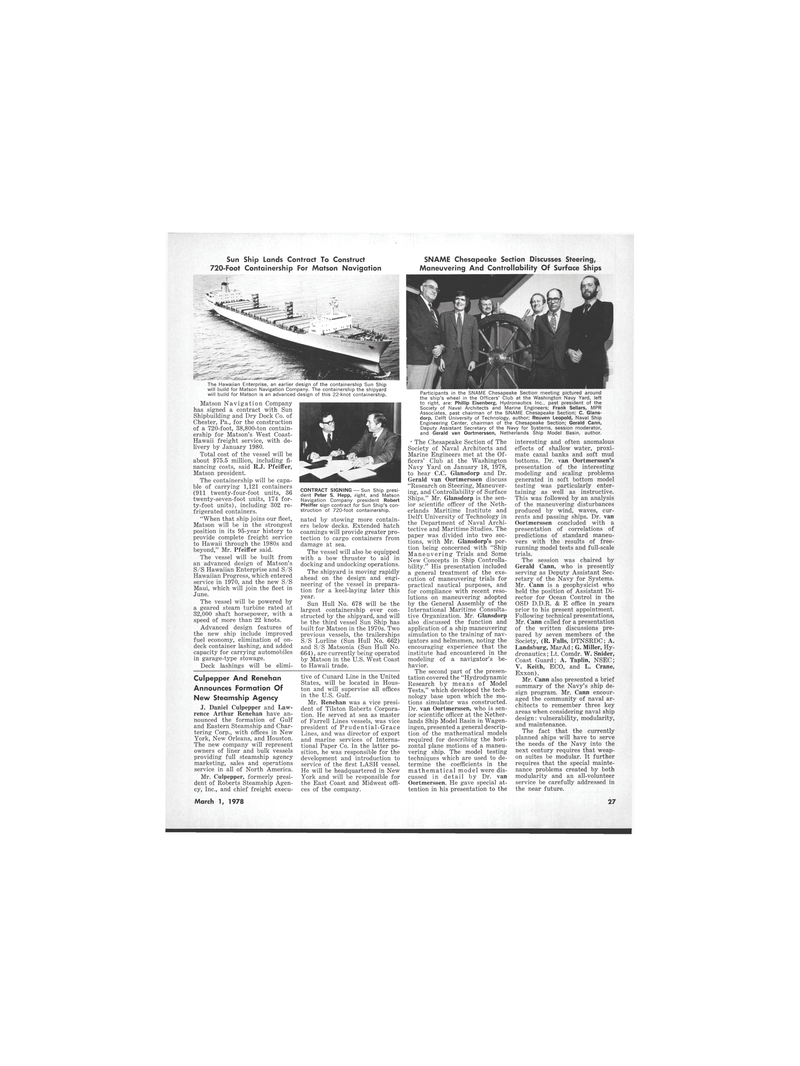 Maneuvering And Controllability Of Surface Ships

Matson Navigation Company- has signed a contract with Sun

Shipbuilding and Dry Dock Co. of

Total cost of the vessel will be about $75.5 million, including fi- nancing costs, said R.J. Pfeiffer,

The containership will be capa- ble of carrying 1,121 containers (911 twenty-four-foot units, 36 twenty-seven-foot units, 174 for- ty-foot units), including 302 re- frigerated containers. "When that ship joins our fleet,

Matson will be in the strongest position in its 95-year history to provide complete freight service to Hawaii through the 1980s and beyond," Mr. Pfeiffer said.

The vessel will be built from an advanced design of Matson's

Hawaiian Progress, which entered service in 1970, and the new S/S

Maui, which will join the fleet in

The vessel will be powered by a geared steam turbine rated at 32,000 shaft horsepower, with a speed of more than 22 knots.

Advanced design features of the new ship include improved fuel economy, elimination of on- deck container lashing, and added capacity for carrying automobiles in garage-type stowage.

Deck lashings will be elimi-

J. Daniel Culpepper and Law- rence Arthur Renehan have an- nounced the formation of Gulf and Eastern Steamship and Char- tering Corp., with offices in New

The new company will represent owners of liner and bulk vessels providing full steamship agency marketing, sales and operations service in all of North America.

Participants in the SNAME Chesapeake Section meeting pictured around the ship's wheel in the Officers' Club at the Washington Navy Yard, left to right, are: Phillip Eisenberg, Hydronautics Inc., past president of the

The vessel will also be equipped with a bow thruster to aid in docking and undocking operations.

The shipyard is moving rapidly ahead on the design and engi- neering of the vessel in prepara- tion for a keel-laying later this year.

Sun Hull No. 678 will be the largest containership ever con- structed by the shipyard, and will be the third vessel Sun Ship has built for Matson in the 1970s. Two previous vessels, the trailerships

S/S Lurline (Sun Hull No. 662) and S/S Matsonia (Sun Hull No. 664), are currently being operated by Matson in the U.S. West Coast to Hawaii trade. tive of Cunard Line in the United

States, will be located in Hous- ton and will supervise all offices in the U.S. Gulf.

Mr. Renehan was a vice presi- dent of Tilston Roberts Corpora- tion. He served at sea as master of Farrell Lines vessels, was vice president of Prudential-Grace

Lines, and was director of export and marine services of Interna- tional Paper Co. In the latter po- sition, he was responsible for the development and introduction to service of the first LASH vessel.

He will be headquartered in New

York and will be responsible for the East Coast and Midwest offi- ces of the company. - The Chesapeake Section of The

Society of Naval Architects and

Marine Engineers met at the Of- ficers' Club at the Washington

Ships." Mr. Glansdorp is the sen- ior scientific officer of the Neth- erlands Maritime Institute and

Delft University of Technology in the Department of Naval Archi- tective and Maritime Studies. The paper was divided into two sec- tions, with Mr. Glansdorp's por- tion being concerned with "Ship

Maneuvering Trials and Some

New Concepts in Ship Controlla- bility." His presentation included a general treatment of the exe- cution of maneuvering trials for practical nautical purposes, and for compliance with recent reso- lutions on maneuvering adopted by the General Assembly of the

International Maritime Consulta- tive Organization. Mr. Glansdorp also discussed the function and application of a ship maneuvering simulation to the training of nav- igators and helmsmen, noting the encouraging experience that the institute had encountered in the modeling of a navigator's be- havior.

The second part of the presen- tation covered the "Hydrodynamic

Research by means of Model

Tests," which developed the tech- nology base upon which the mo- tions simulator was constructed.

Dr. van Oortmerssen, who is sen- ior scientific officer at the Nether- lands Ship Model Basin in Wagen- ingen, presented a general descrip- tion of the mathematical models required for describing the hori- zontal plane motions of a maneu- vering ship. The model testing techniques which are used to de- termine the coefficients in the mathematical model were dis- cussed in detail by Dr. van

Oortmerssen. He gave special at- tention in his presentation to the interesting and often anomalous effects of shallow water, proxi- mate canal banks and soft mud bottoms. Dr. van Oortmerssen's presentation of the interesting modeling and scaling problems generated in soft bottom model testing was particularly enter- taining as well as instructive.

This was followed by an analysis of the maneuvering disturbances produced by wind, waves, cur- rents and passing ships. Dr. van

Oortmerssen concluded with a presentation of correlations of predictions of standard maneu- vers with the results of free- running model tests and full-scale trials.

The session was chaired by

Gerald Cann, who is presently serving as Deputy Assistant Sec- retary of the Navy for Systems.

Mr. Cann is a geophysicist who held the position of Assistant Di- rector for Ocean Control in the

OSD D.D.R. & E office in years prior to his present appointment.

Mr. Cann called for a presentation of the written discussions pre- pared by seven members of the

The fact that the currently planned ships will have to serve the needs of the Navy into the next century requires that weap- on suites be modular. It further requires that the special mainte- nance problems created by both modularity and an all-volunteer service be carefully addressed in the near future.