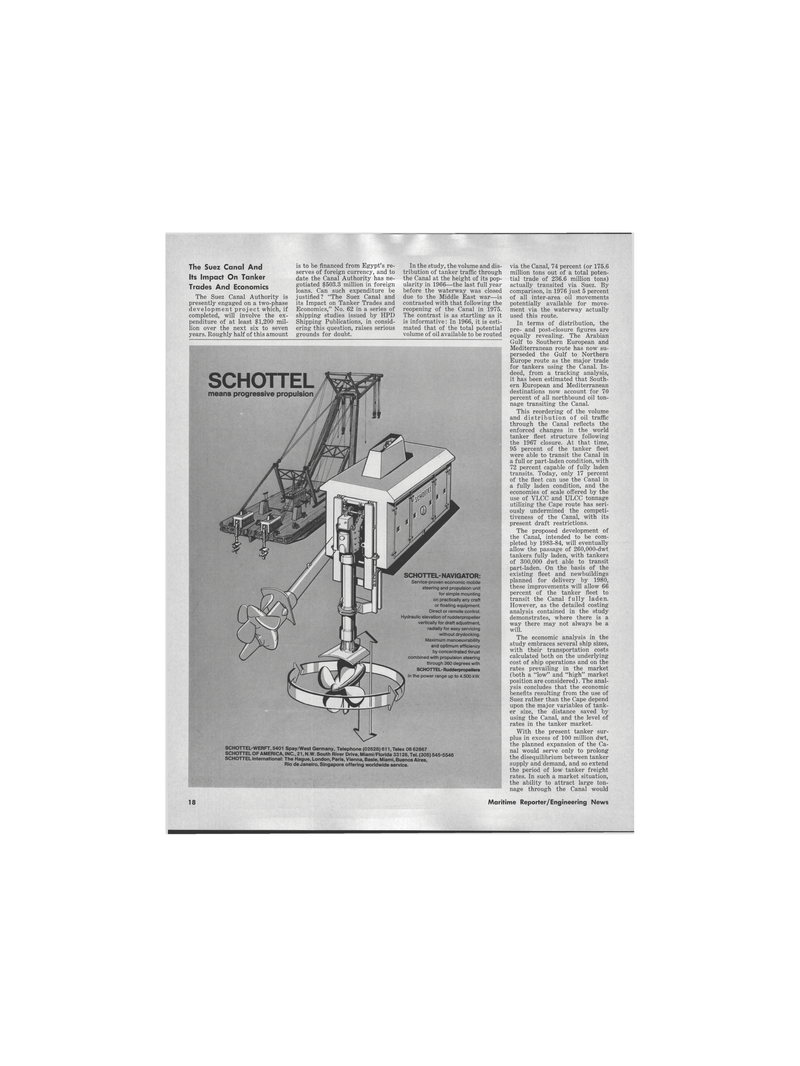 The Suez Canal And

Its Impact On Tanker

The Suez Canal Authority is presently engaged on a two-phase development project which, if completed, will involve the ex- penditure of at least $1,200 mil- lion over the next six to seven years. Roughly half of this amount is to be financed from Egypt's re- serves of foreign currency, and to date the Canal Authority has ne- gotiated $503.3 million in foreign loans. Can such expenditure be justified? "The Suez Canal and its Impact on Tanker Trades and

Economics," No. 62 in a series of shipping studies issued by HPD

In the study, the volume and dis- tribution of tanker traffic through the Canal at the height of its pop- ularity in 1966—the last full year before the waterway was closed due to the Middle East war—is contrasted with that following the reopening of the Canal in 1975.

The contrast is as startling as it is informative: In 1966, it is esti- mated that of the total potential volume of oil available to be routed via the Canal, 74 percent (or 175.6 million tons out of a total poten- tial trade of 236.6 million tons) actually transited via Suez. By comparison, in 1976 just 5 percent of all inter-area oil movements potentially available for move- ment via the waterway actually used this route.

In terms of distribution, the pre- and post-closure figures are equally revealing. The Arabian

Gulf to Southern European and

Mediterranean route has now su- perseded the Gulf to Northern

Europe route as the major trade for tankers using the Canal. In- deed, from a tracking analysis, it has been estimated that South- ern European and Mediterranean destinations now account for 70 percent of all northbound oil ton- nage transiting the Canal.

This reordering of the volume and distribution of oil traffic through the Canal reflects the enforced changes in the world tanker fleet structure following the 1967 closure. At that time, 95 percent of the tanker fleet were able to transit the Canal in a full or part-laden condition, with 72 percent capable of fully laden transits. Today, only 17 percent of the fleet can use the Canal in a fully laden condition, and the economies of scale offered by the use of VLCC and ULCC tonnage utilizing the Cape route has seri- ously undermined the competi- tiveness of the Canal, with its present draft restrictions.

The proposed development of the Canal, intended to be com- pleted by 1983-84, will eventually allow the passage of 260,000-dwt tankers fully laden, with tankers of 300,000 dwt able to transit part-laden. On the basis of the existing fleet and newbuildings planned for delivery by 1980, these improvements will allow 66 percent of the tanker fleet to transit the Canal fully laden.

However, as the detailed costing analysis contained in the study demonstrates, where there is a way there may not always be a will.

Suez rather than the Cape depend upon the major variables of tank- er size, the distance saved by using the Canal, and the level of rates in the tanker market.

With the present tanker sur- plus in excess of 100 million dwt, the planned expansion of the Ca- nal would serve only to prolong the disequilibrium between tanker supply and demand, and so extend the period of low tanker freight rates. In such a market situation, the ability to attract large ton- nage through the Canal would

SCHOTTEL- Rudderpropellers in the power range up to 4.500 kW.