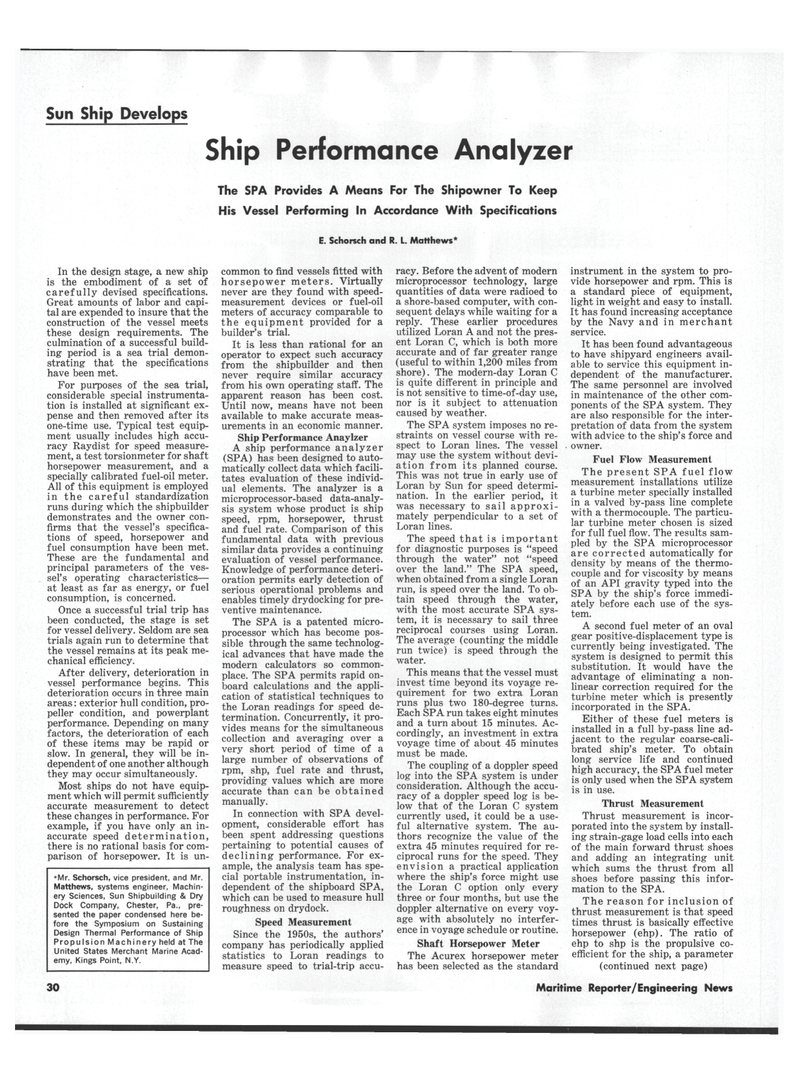 The SPA Provides A Means For The Shipowner To Keep

His Vessel Performing In Accordance With Specifications

In the design stage, a new ship is the embodiment of a set of carefully devised specifications.

Great amounts of labor and capi- tal are expended to insure that the construction of the vessel meets these design requirements. The culmination of a successful build- ing period is a sea trial demon- strating that the specifications have been met.

For purposes of the sea trial, considerable special instrumenta- tion is installed at significant ex- pense and then removed after its one-time use. Typical test equip- ment usually includes high accu- racy Raydist for speed measure- ment, a test torsionmeter for shaft horsepower measurement, and a specially calibrated fuel-oil meter.

All of this equipment is employed in the careful standardization runs during which the shipbuilder demonstrates and the owner con- firms that the vessel's specifica- tions of speed, horsepower and fuel consumption have been met.

These are the fundamental and principal parameters of the ves- sel's operating characteristics— at least as far as energy, or fuel consumption, is concerned.

Once a successful trial trip has been conducted, the stage is set for vessel delivery. Seldom are sea trials again run to determine that the vessel remains at its peak me- chanical efficiency.

After delivery, deterioration in vessel performance begins. This deterioration occurs in three main areas: exterior hull condition, pro- peller condition, and powerplant performance. Depending on many factors, the deterioration of each of these items may be rapid or slow. In general, they will be in- dependent of one another although they may occur simultaneously.

Most ships do not have equip- ment which will permit sufficiently accurate measurement to detect these changes in performance. For example, if you have only an in- accurate speed determination, there is no rational basis for com- parison of horsepower. It is un- *Mr. Schorsch, vice president, and Mr.

Propulsion Machinery held at The

It is less than rational for an operator to expect such accuracy from the shipbuilder and then never require similar accuracy from his own operating staff. The apparent reason has been cost.

Until now, means have not been available to make accurate meas- urements in an economic manner.

A ship performance analyzer (SPA) has been designed to auto- matically collect data which facili- tates evaluation of these individ- ual elements. The analyzer is a microprocessor-based data-analy- sis system whose product is ship speed, rpm, horsepower, thrust and fuel rate. Comparison of this fundamental data with previous similar data provides a continuing evaluation of vessel performance.

The SPA is a patented micro- processor which has become pos- sible through the same technolog- ical advances that have made the modern calculators so common- place. The SPA permits rapid on- board calculations and the appli- cation of statistical techniques to the Loran readings for speed de- termination. Concurrently, it pro- vides means for the simultaneous collection and averaging over a very short period of time of a large number of observations of rpm, shp, fuel rate and thrust, providing values which are more accurate than can be obtained manually.

In connection with SPA devel- opment, considerable effort has been spent addressing questions pertaining to potential causes of declining performance. For ex- ample, the analysis team has spe- cial portable instrumentation, in- dependent of the shipboard SPA, which can be used to measure hull roughness on drydock.

Since the 1950s, the authors' company has periodically applied statistics to Loran readings to measure speed to trial-trip accu- racy. Before the advent of modern microprocessor technology, large quantities of data were radioed to a shore-based computer, with con- sequent delays while waiting for a reply. These earlier procedures utilized Loran A and not the pres- ent Loran C, which is both more accurate and of far greater range (useful to within 1,200 miles from shore). The modern-day Loran C is quite different in principle and is not sensitive to time-of-day use, nor is it subject to attenuation caused by weather.

The SPA system imposes no re- straints on vessel course with re- spect to Loran lines. The vessel may use the system without devi- ation from its planned course.

This was not true in early use of

Loran by Sun for speed determi- nation. In the earlier period, it was necessary to sail approxi- mately perpendicular to a set of

The average (counting the middle run twice) is speed through the water.

This means that the vessel must invest time beyond its voyage re- quirement for two extra Loran runs plus two 180-degree turns.

Each SPA run takes eight minutes and a turn about 15 minutes. Ac- cordingly, an investment in extra voyage time of about 45 minutes must be made.

The coupling of a doppler speed log into the SPA system is under consideration. Although the accu- racy of a doppler speed log is be- low that of the Loran C system currently used, it could be a use- ful alternative system. The au- thors recognize the value of the extra 45 minutes required for re- ciprocal runs for the speed. They envision a practical application where the ship's force might use the Loran C option only every three or four months, but use the doppler alternative on every voy- age with absolutely no interfer- ence in voyage schedule or routine.

The Acurex horsepower meter has been selected as the standard instrument in the system to pro- vide horsepower and rpm. This is a standard piece of equipment, light in weight and easy to install.

It has found increasing acceptance by the Navy and in merchant service.

It has been found advantageous to have shipyard engineers avail- able to service this equipment in- dependent of the manufacturer.

The same personnel are involved in maintenance of the other com- ponents of the SPA system. They are also responsible for the inter- pretation of data from the system with advice to the ship's force and owner.

The present SPA fuel flow measurement installations utilize a turbine meter specially installed in a valved by-pass line complete with a thermocouple. The particu- lar turbine meter chosen is sized for full fuel flow. The results sam- pled by the SPA microprocessor are corrected automatically for density by means of the thermo- couple and for viscosity by means of an API gravity typed into the

SPA by the ship's force immedi- ately before each use of the sys- tem.

A second fuel meter of an oval gear positive-displacement type is currently being investigated. The system is designed to permit this substitution. It would have the advantage of eliminating a non- linear correction required for the turbine meter which is presently incorporated in the SPA.

Either of these fuel meters is installed in a full by-pass line ad- jacent to the regular coarse-cali- brated ship's meter. To obtain long service life and continued high accuracy, the SPA fuel meter is only used when the SPA system is in use.

Thrust measurement is incor- porated into the system by install- ing strain-gage load cells into each of the main forward thrust shoes and adding an integrating unit which sums the thrust from all shoes before passing this infor- mation to the SPA.

The reason for inclusion of thrust measurement is that speed times thrust is basically effective horsepower (ehp). The ratio of ehp to shp is the propulsive co- efficient for the ship, a parameter (continued next page) 30 Maritime Reporter/Engineering News