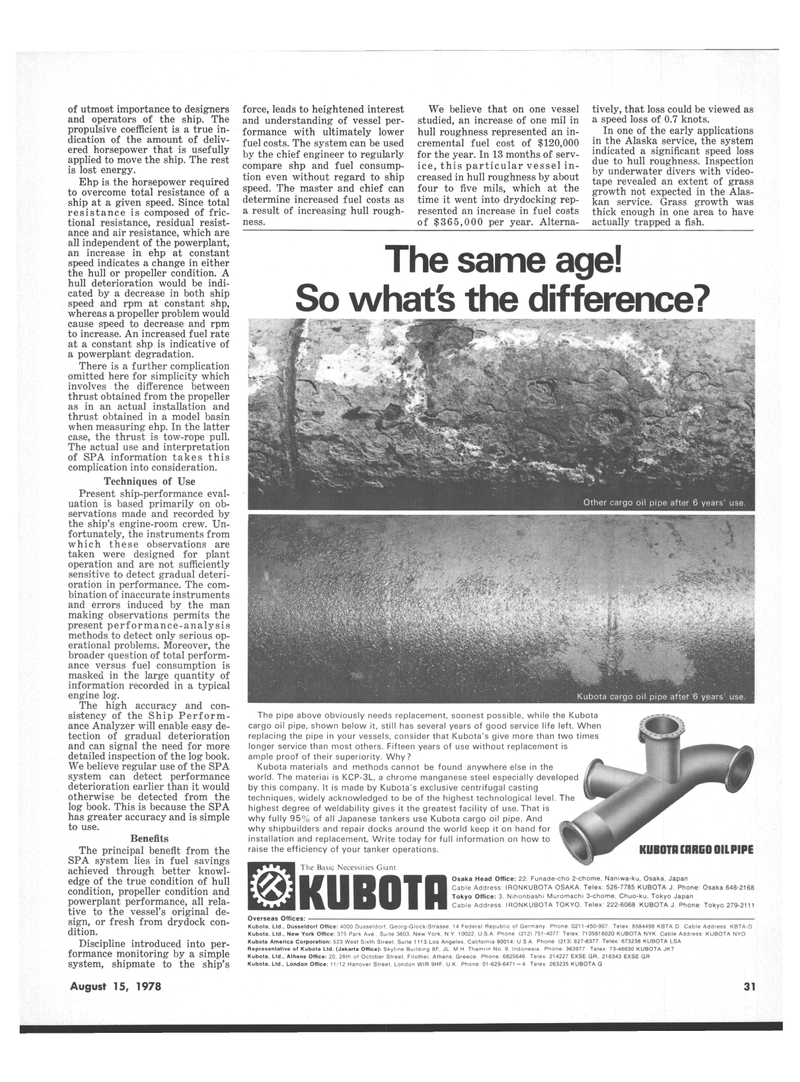 of utmost importance to designers and operators of the ship. The propulsive coefficient is a true in- dication of the amount of deliv- ered horsepower that is usefully applied to move the ship. The rest is lost energy.

Ehp is the horsepower required to overcome total resistance of a ship at a given speed. Since total resistance is composed of fric- tional resistance, residual resist- ance and air resistance, which are all independent of the powerplant, an increase in ehp at constant speed indicates a change in either the hull or propeller condition. A hull deterioration would be indi- cated by a decrease in both ship speed and rpm at constant shp, whereas a propeller problem would cause speed to decrease and rpm to increase. An increased fuel rate at a constant shp is indicative of a powerplant degradation.

There is a further complication omitted here for simplicity which involves the difference between thrust obtained from the propeller as in an actual installation and thrust obtained in a model basin when measuring ehp. In the latter case, the thrust is tow-rope pull.

The actual use and interpretation of SPA information takes this complication into consideration.

Present ship-performance eval- uation is based primarily on ob- servations made and recorded by the ship's engine-room crew. Un- fortunately, the instruments from which these observations are taken were designed for plant operation and are not sufficiently sensitive to detect gradual deteri- oration in performance. The com- bination of inaccurate instruments and errors induced by the man making observations permits the present performance-analysis methods to detect only serious op- erational problems. Moreover, the broader question of total perform- ance versus fuel consumption is masked in the large quantity of information recorded in a typical engine log.

The high accuracy and con- sistency of the Ship Perform- ance Analyzer will enable easy de- tection of gradual deterioration and can signal the need for more detailed inspection of the log book.

We believe regular use of the SPA system can detect performance deterioration earlier than it would otherwise be detected from the log book. This is because the SPA has greater accuracy and is simple to use.

The principal benefit from the

Discipline introduced into per- formance monitoring by a simple system, shipmate to the ship's force, leads to heightened interest and understanding of vessel per- formance with ultimately lower fuel costs. The system can be used by the chief engineer to regularly compare shp and fuel consump- tion even without regard to ship speed. The master and chief can determine increased fuel costs as a result of increasing hull rough- ness.

We believe that on one vessel studied, an increase of one mil in hull roughness represented an in- cremental fuel cost of $120,000 for the year. In 13 months of serv- ice, this particular vessel in- creased in hull roughness by about four to five mils, which at the time it went into drydocking rep- resented an increase in fuel costs of $365,000 per year. Alterna- tively, that loss could be viewed as a speed loss of 0.7 knots.

In one of the early applications in the Alaska service, the system indicated a significant speed loss due to hull roughness. Inspection by underwater divers with video- tape revealed an extent of grass growth not expected in the Alas- kan service. Grass growth was thick enough in one area to have actually trapped a fish.

So what's the difference?

The pipe above obviously needs replacement, soonest possible, while the Kubota cargo oil pipe, shown below it, still has several years of good service life left. When replacing the pipe in your vessels, consider that Kubota's give more than two times longer service than most others. Fifteen years of use without replacement is ample proof of their superiority. Why?

Kubota materials and methods cannot be found anywhere else in the world. The material is KCP-3L, a chrome manganese steel especially developed by this company. It is made by Kubota's exclusive centrifugal casting techniques, widely acknowledged to be of the highest technological level. The highest degree of weldability gives it the greatest facility of use. That is why fully 95% of all Japanese tankers use Kubota cargo oil pipe. And why shipbuilders and repair docks around the world keep it on hand for installation and replacement Write today for full information on how to raise the efficiency of your tanker operations. KUBOTHinRGO OIL PIPE