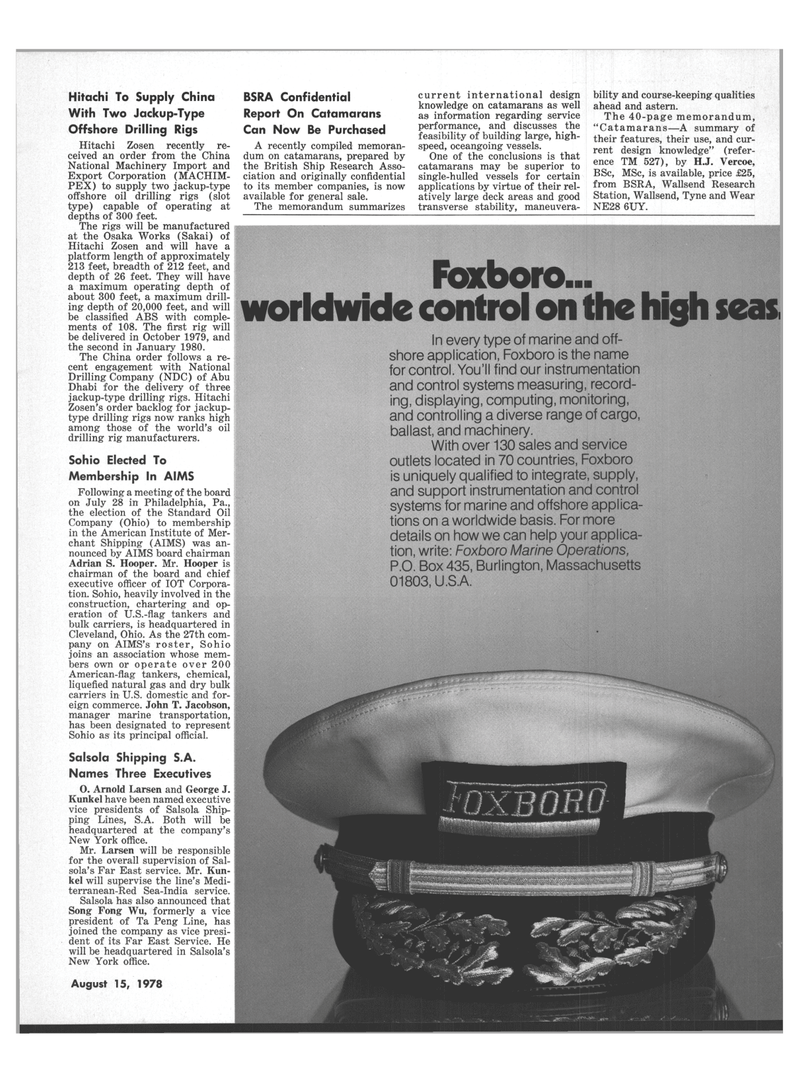 Hitachi Zosen recently re- ceived an order from the China

The rigs will be manufactured at the Osaka Works (Sakai) of

Hitachi Zosen and will have a platform length of approximately 213 feet, breadth of 212 feet, and depth of 26 feet. They will have a maximum operating depth of about 300 feet, a maximum drill- ing depth of 20,000 feet, and will be classified ABS with comple- ments of 108. The first rig will be delivered in October 1979, and the second in January 1980.

The China order follows a re- cent engagement with National

Dhabi for the delivery of three jackup-type drilling rigs. Hitachi

Following a meeting of the board on July 28 in Philadelphia, Pa., the election of the Standard Oil

Adrian S. Hooper. Mr. Hooper is chairman of the board and chief executive officer of IOT Corpora- tion. Sohio, heavily involved in the construction, chartering and op- eration of U.S.-flag tankers and bulk carriers, is headquartered in

Cleveland, Ohio. As the 27th com- I pany on AIMS's roster, Sohio joins an association whose mem- | bers own or operate over 200

Sohio as its principal official.

Kunkel have been named executive vice presidents of Salsola Ship- ping Lines, S.A. Both will be headquartered at the company's

Salsola has also announced that

Song Fong Wu, formerly a vice president of Ta Peng Line, has joined the company as vice presi- dent of its Far East Service. He will be headquartered in Salsola's

Can Now Be Purchased

A recently compiled memoran- dum on catamarans, prepared by the British Ship Research Asso- ciation and originally confidential to its member companies, is now available for general sale.

One of the conclusions is that catamarans may be superior to single-hulled vessels for certain applications by virtue of their rel- atively large deck areas and good transverse stability, maneuvera- bility and course-keeping qualities ahead and astern.

The 40-page memorandum, "Catamarans—A summary of their features, their use, and cur- rent design knowledge" (refer- ence TM 527), by H.J. Vercoe,

In every type of marine and off- shore application, Foxboro is the name for control. You'll find our instrumentation and control systems measuring, record- ing, displaying, computing, monitoring, and controlling a diverse range of cargo, ballast, and machinery.

With over 130 sales and service outlets located in 70 countries, Foxboro is uniquely qualified to integrate, supply, and support instrumentation and control systems for marine and offshore applica- tions on a worldwide basis. For more details on how we can help your applica- tion, write: Foxboro Marine Operations,