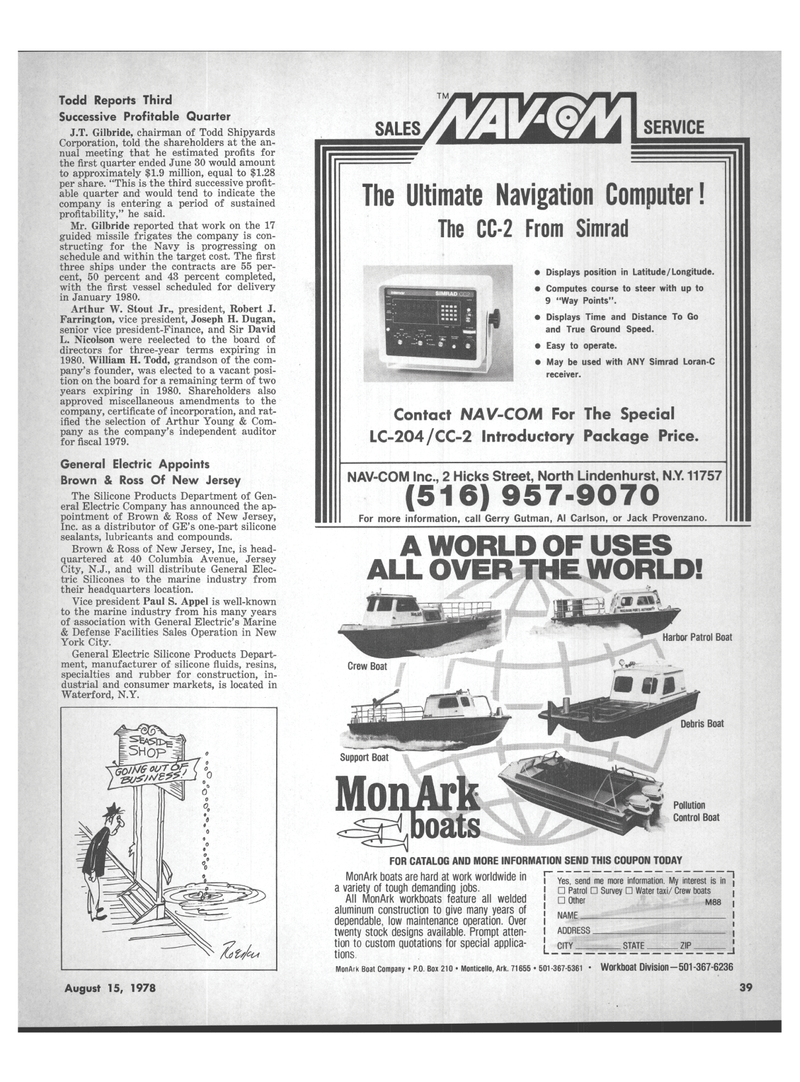 Corporation, told the shareholders at the an- nual meeting- that he estimated profits for the first quarter ended June 30 would amount to approximately $1.9 million, equal to $1.28 per share. "This is the third successive profit- able quarter and would tend to indicate the company is entering a period of sustained profitability," he said.

Mr. Gilbride reported that work on the 17 guided missile frigates the company is con- structing for the Navy is progressing on schedule and within the target cost. The first three ships under the contracts are 55 per- cent, 50 percent and 43 percent completed, with the first vessel scheduled for delivery in January 1980.

L. Nicolson were reelected to the board of directors for three-year terms expiring in 1980. William H. Todd, grandson of the com- pany's founder, was elected to a vacant posi- tion on the board for a remaining term of two years expiring in 1980. Shareholders also approved miscellaneous amendments to the company, certificate of incorporation, and rat- ified the selection of Arthur Young & Com- pany as the company's independent auditor for fiscal 1979.

The Silicone Products Department of Gen- eral Electric Company has announced the ap- pointment of Brown & Ross of New Jersey,

Inc. as a distributor of GE's one-part silicone sealants, lubricants and compounds.

City, N.J., and will distribute General Elec- tric Silicones to the marine industry from their headquarters location.

Vice president Paul S. Appel is well-known to the marine industry from his many years of association with General Electric's Marine & Defense Facilities Sales Operation in New

The CC-2 From Simrad • Displays position in Latitude/Longitude. • Computes course to steer with up to 9 "Way Points". • Displays Time and Distance To Go and True Ground Speed. • Easy to operate. • May be used with ANY Simrad Loran-C receiver.

A WORLD OF USES ALL OVER THE WORLD! lis.

I Yes, send me more information. My interest is in { • Patrol • Survey • Water taxi/ Crew boats ' • Other

FOR CATALOG AND MORE INFORMATION SEND THIS COUPON TODAY

MonArk boats are hard at work worldwide in a variety of tough demanding jobs.

All MonArk workboats feature all welded aluminum construction to give many years of dependable, low maintenance operation. Over twenty stock designs available. Prompt atten- tion to custom quotations for special applica- tions. i