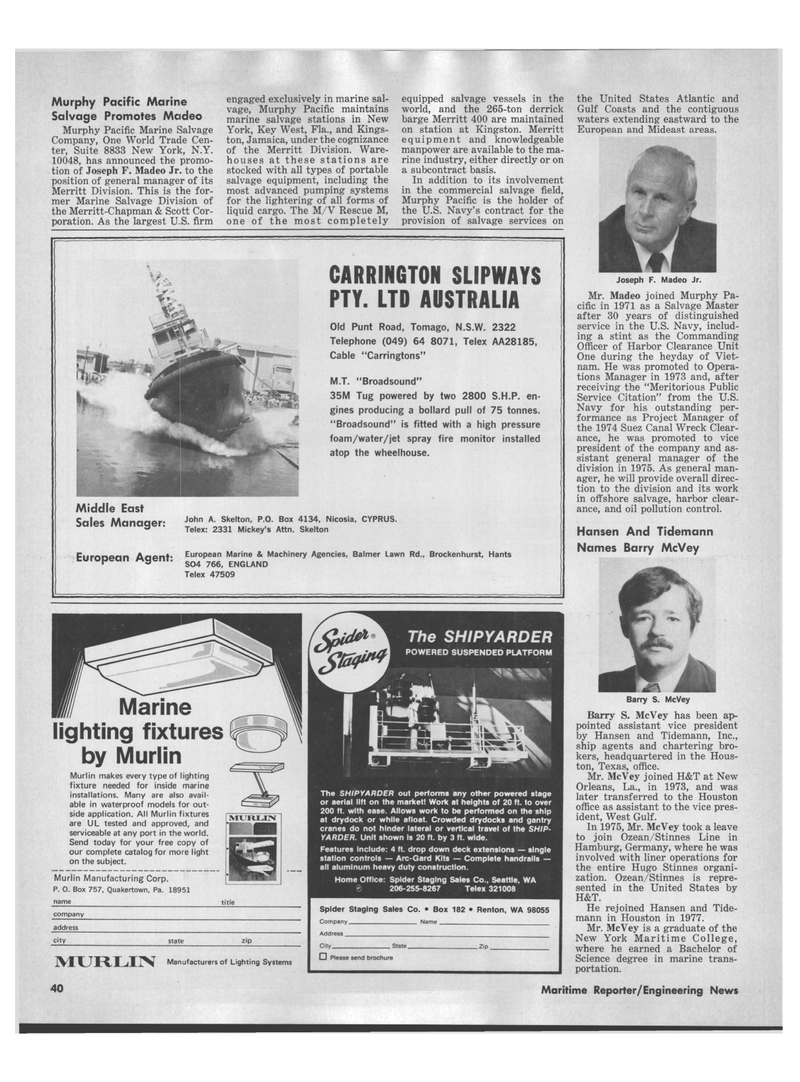 Company, One World Trade Cen- ter, Suite 8833 New York, N.Y. 10048, has announced the promo- tion of Joseph F. Madeo Jr. to the position of general manager of its

York, Key West, Fla., and Kings- ton, Jamaica, under the cognizance of the Merritt Division. Ware- houses at these stations are stocked with all types of portable salvage equipment, including the most advanced pumping systems for the lightering of all forms of liquid cargo. The M/V Rescue M, one of the most completely equipped salvage vessels in the world, and the 265-ton derrick barge Merritt 400 are maintained on station at Kingston. Merritt equipment and knowledgeable manpower are available to the ma- rine industry, either directly or on a subcontract basis.

In addition to its involvement in the commercial salvage field,

Murphy Pacific is the holder of the U.S. Navy's contract for the provision of salvage services on the United States Atlantic and

Gulf Coasts and the contiguous waters extending eastward to the

Mr. Madeo joined Murphy Pa- cific in 1971 as a Salvage Master after 30 years of distinguished service in the U.S. Navy, includ- ing a stint as the Commanding

One during the heyday of Viet- nam. He was promoted to Opera- tions Manager in 1973 and, after receiving the "Meritorious Public

Service Citation" from the U.S.

Navy for his outstanding per- formance as Project Manager of the 1974 Suez Canal Wreck Clear- ance, he was promoted to vice president of the company and as- sistant general manager of the division in 1975. As general man- ager, he will provide overall direc- tion to the division and its work in offshore salvage, harbor clear- ance, and oil pollution control.

The SHIPYARDER out performs any other powered stage or aerial lift on the market! Work at heights of 20 ft. to over 200 ft. with ease. Allows work to be performed on the ship at drydock or while afloat. Crowded drydocks and gantry cranes do not hinder lateral or vertical travel of the SHIP-

Orleans, La., in 1973, and was later transferred to the Houston office as assistant to the vice pres- ident, West Gulf.

In 1975, Mr. McVey took a leave to join Ozean/Stinnes Line in

Hamburg, Germany, where he was involved with liner operations for the entire Hugo Stinnes organi- zation. Ozean/Stinnes is repre- sented in the United States by

He rejoined Hansen and Tide- mann in Houston in 1977.

Mr. McVey is a graduate of the

New York Maritime College, where he earned a Bachelor of

Murlin makes every type of lighting fixture needed for inside marine installations. Many are also avail- able in waterproof models for out- side application. All Murlin fixtures are UL tested and approved, and serviceable at any port in the world.

Send today for your free copy of our complete catalog for more light on the subject.