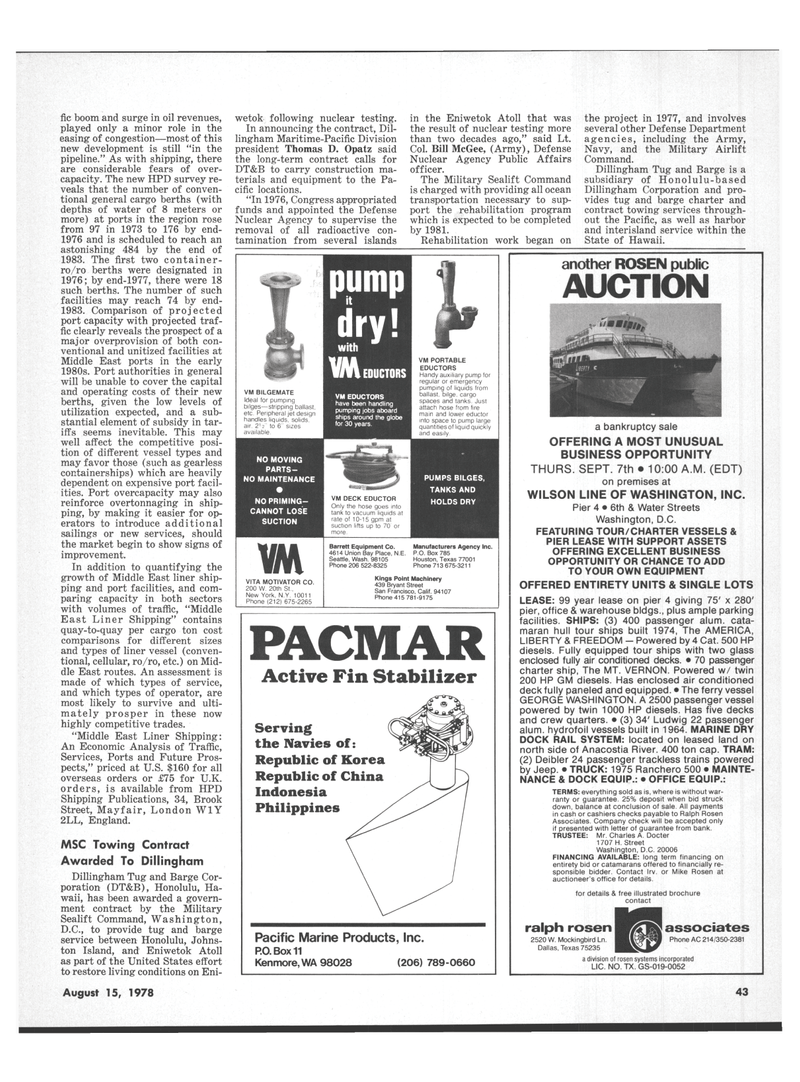 fic boom and surge in oil revenues, played only a minor role in the easing of congestion—most of this new development is still "in the pipeline." As with shipping, there are considerable fears of over- capacity. The new HPD survey re- veals that the number of conven- tional general cargo berths (with depths of water of 8 meters or more) at ports in the region rose from 97 in 1973 to 176 by end- 1976 and is scheduled to reach an astonishing 484 by the end of 1983. The first two container- ro/ro berths were designated in 1976; by end-1977, there were 18 such berths. The number of such facilities may reach 74 by end- 1983. Comparison of projected port capacity with projected traf- fic clearly reveals the prospect of a major overprovision of both con- ventional and unitized facilities at

Middle East ports in the early 1980s. Port authorities in general will be unable to cover the capital and operating costs of their new berths, given the low levels of utilization expected, and a sub- stantial element of subsidy in tar- iffs seems inevitable. This may well affect the competitive posi- tion of different vessel types and may favor those (such as gear less containerships) which are heavily dependent on expensive port facil- ities. Port overcapacity may also reinforce overtonnaging in ship- ping, by making it easier for op- erators to introduce additional sailings or new services, should the market begin to show signs of improvement.

In addition to quantifying the growth of Middle East liner ship- ping and port facilities, and com- paring capacity in both sectors with volumes of traffic, "Middle

East Liner Shipping" contains quay-to-quay per cargo ton cost comparisons for different sizes and types of liner vessel (conven- tional, cellular, ro/ro, etc.) on Mid- dle East routes. An assessment is made of which types of service, and which types of operator, are most likely to survive and ulti- mately prosper in these now highly competitive trades. "Middle East Liner Shipping:

An Economic Analysis of Traffic,

Services, Ports and Future Pros- pects," priced at U.S. $160 for all overseas orders or £75 for U.K. orders, is available from HPD

Dillingham Tug and Barge Cor- poration (DT&B), Honolulu, Ha- waii, has been awarded a govern- ment contract by the Military

DT&B to carry construction ma- terials and equipment to the Pa- cific locations. "In 1976, Congress appropriated funds and appointed the Defense

Nuclear Agency to supervise the removal of all radioactive con- tamination from several islands b:

Only the hose goes into tank to vacuum liquids at rate of 10-15 gpm at suction lifts up to 70 or more. in the Eniwetok Atoll that was the result of nuclear testing more than two decades ago," said Lt.

The Military Sealift Command is charged with providing all ocean transportation necessary to sup- port the rehabilitation program which is expected to be completed by 1981.

HOLDS DRY the project in 1977, and involves several other Defense Department agencies, including the Army,

Navy, and the Military Airlift

Dillingham Tug and Barge is a subsidiary of Honolulu-based

Dillingham Corporation and pro- vides tug and barge charter and contract towing services through- out the Pacific, as well as harbor and interisland service within the

Serving the Navies of:

OFFERING A MOST UNUSUAL

OPPORTUNITY OR CHANCE TO ADD

TO YOUR OWN EQUIPMENT

TERMS: everything sold as is, where is without war- ranty or guarantee. 25% deposit when bid struck down, balance at conclusion of sale. All payments in cash or cashiers checks payable to Ralph Rosen

Associates. Company check will be accepted only if presented with letter of guarantee from bank.