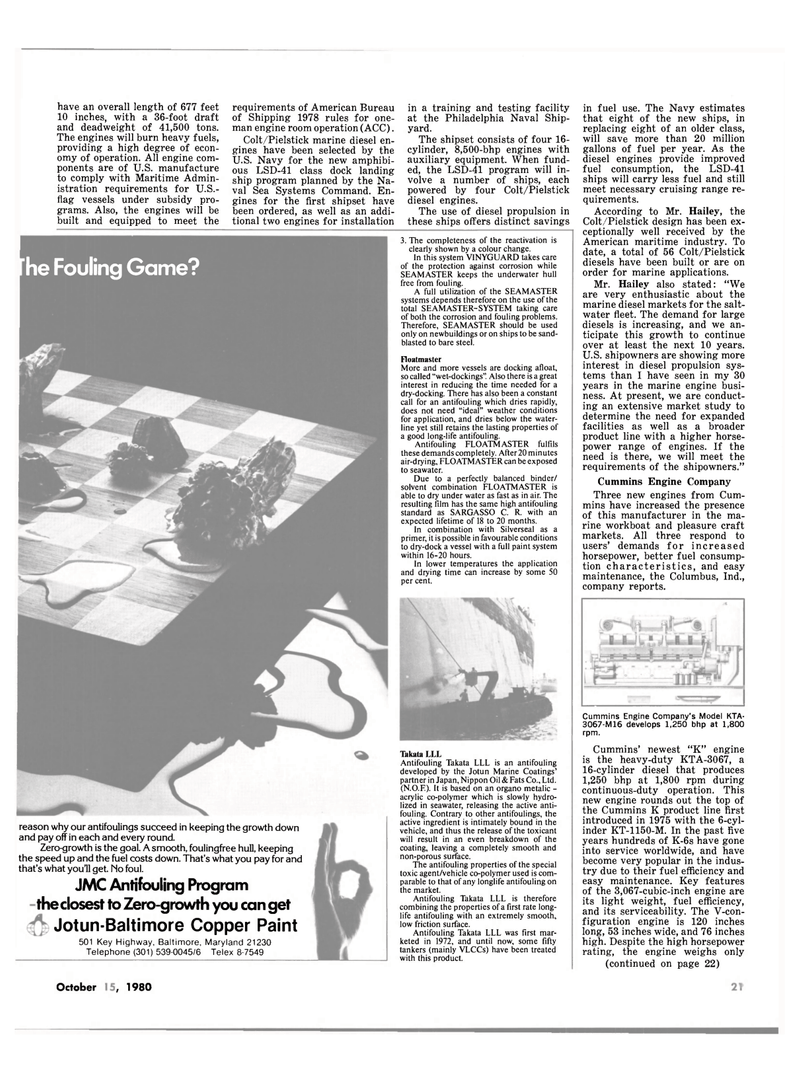 The engines will burn heavy fuels, providing a high degree of econ- omy of operation. All engine com- ponents are of U.S. manufacture to comply with Maritime Admin- istration requirements for U.S.- flag vessels under subsidy pro- grams. Also, the engines will be built and equipped to meet the requirements of American Bureau of Shipping 1978 rules for one- man engine room operation (ACC).

Colt/Pielstick marine diesel en- gines have been selected by the

U.S. Navy for the new amphibi- ous LSD-41 class dock landing ship program planned by the Na- val Sea Systems Command. En- gines for the first shipset have been ordered, as well as an addi- tional two engines for installation in a training and testing facility at the Philadelphia Naval Ship- yard.

The shipset consists of four 16- cylinder, 8,500-bhp engines with auxiliary equipment. When fund- ed, the LSD-41 program will in- volve a number of ships, each powered by four Colt/Pielstick diesel engines.

The use of diesel propulsion in these ships offers distinct savings he Fouling Game? reason why our antifoulings succeed in keeping the growth down and pay off in each and every round.

Zero-growth is the goal. A smooth, foulingfree hull, keeping the speed up and the fuel costs down. That's what you pay for and that's what you'll get. No foul.

JMC Antifouling Program the closest to Zero-growth you can get

A full utilization of the SEAMASTER systems depends therefore on the use of the total SEAMASTER-SYSTEM taking care of both the corrosion and fouling problems.

Therefore, SEAMASTER should be used only on newbuildings or on ships to be sand- blasted to bare steel.

More and more vessels are docking afloat, so called "wet-dockings". Also there is a great interest in reducing the time needed for a dry-docking. There has also been a constant call for an antifouling which dries rapidly, does not need "ideal" weather conditions for application, and dries below the water- line yet still retains the lasting properties of a good long-life antifouling.

Antifouling FLOATMASTER fulfils these demands completely. After 20 minutes air-drying, FLOATMASTER can be exposed to seawater.

Due to a perfectly balanced binder/ solvent combination FLOATMASTER is able to dry under water as fast as in air. The resulting film has the same high antifouling standard as SARGASSO C. R. with an expected lifetime of 18 to 20 months.

In combination with Silverseal as a primer, it is possible in favourable conditions to dry-dock a vessel with a full paint system within 16-20 hours.

In lower temperatures the application and drying time can increase by some 50 per cent.

Antifouling Takata LLL is an antifouling developed by the Jotun Marine Coatings' partner in Japan, Nippon Oil & Fats Co., Ltd. (N.O.F.). It is based on an organo metalic - acrylic co-polymer which is slowly hydro- lized in seawater, releasing the active anti- fouling. Contrary to other antifoulings, the active ingredient is intimately bound in the vehicle, and thus the release of the toxicant will result in an even breakdown of the coating, leaving a completely smooth and non-porous surface.

The antifouling properties of the special toxic agent/vehicle co-polymer used is com- parable to that of any longlife antifouling on the market.

Antifouling Takata LLL was first mar- keted in 1972, and until now, some fifty tankers (mainly VLCCs) have been treated with this product. in fuel use. The Navy estimates that eight of the new ships, in replacing eight of an older class, will save more than 20 million gallons of fuel per year. As the diesel engines provide improved fuel consumption, the LSD-41 ships will carry less fuel and still meet necessary cruising range re- quirements.

According to Mr. Hailey, the

Colt/Pielstick design has been ex- ceptionally well received by the

American maritime industry. To date, a total of 56 Colt/Pielstick diesels have been built or are on order for marine applications.

Mr. Hailey also stated: "We are very enthusiastic about the marine diesel markets for the salt- water fleet. The demand for large diesels is increasing, and we an- ticipate this growth to continue over at least the next 10 years.

U.S. shipowners are showing more interest in diesel propulsion sys- tems than I have seen in my 30 years in the marine engine busi- ness. At present, we are conduct- ing an extensive market study to determine the need for expanded facilities as well as a broader product line with a higher horse- power range of engines. If the need is there, we will meet the requirements of the shipowners."

Cummins' newest "K" engine is the heavy-duty KTA-3067, a 16-cylinder diesel that produces 1,250 bhp at 1,800 rpm during continuous-duty operation. This new engine rounds out the top of the Cummins K product line first introduced in 1975 with the 6-cyl- inder KT-1150-M. In the past five years hundreds of K-6s have gone into service worldwide, and have become very popular in the indus- try due to their fuel efficiency and easy maintenance. Key features of the 3,067-cubic-inch engine are its light weight, fuel efficiency, and its serviceability. The V-con- figuration engine is 120 inches long, 53 inches wide, and 76 inches high. Despite the high horsepower rating, the engine weighs only (continued on page 22)