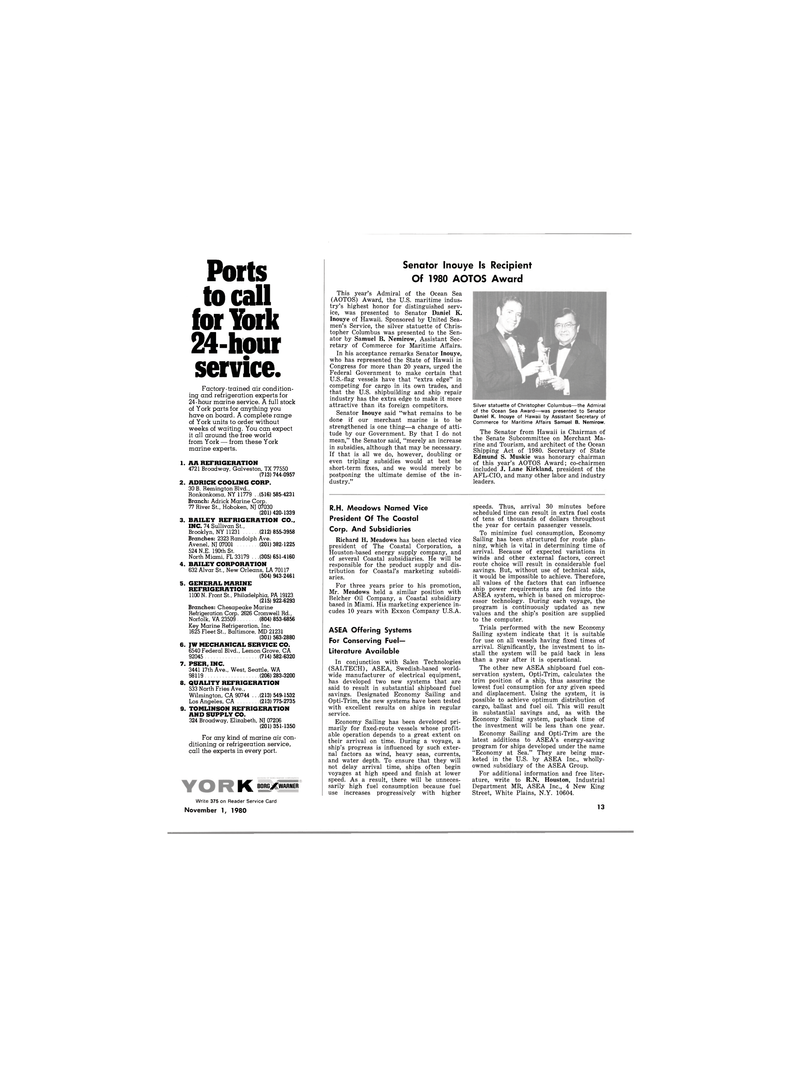 Factory-trained air condition- ing and refrigeration experts for 24-hour marine service. A full stock of York parts for anything you have on board. A complete range of York units to order without weeks of waiting. You can expect it all around the free world from York — from these York marine experts. 1. AA REFRIGERATION 4721 Broadway, Galveston, TX 77550 (713) 744-0957 2. ADRICK COOLING CORP. 30 B. Remington Blvd.,

For any kind of marine air con- ditioning or refrigeration service, call the experts in every port. j^l BORGjCWflRNER

Inouye of Hawaii. Sponsored by United Sea- men's Service, the silver statuette of Chris- topher Columbus was presented to the Sen- ator by Samuel B. Nemirow, Assistant Sec- retary of Commerce for Maritime Affairs.

In his acceptance remarks Senator Inouye, who has represented the State of Hawaii in

Congress for more than 20 years, urged the

Federal Government to make certain that

U.S.-flag vessels have that "extra edge" in competing for cargo in its own trades, and that the U.S. shipbuilding and ship repair industry has the extra edge to make it more attractive than its foreign competitors.

Senator Inouye said "what remains to be done if our merchant marine is to be strengthened is one thing—a change of atti- tude by our Government. By that I do not mean," the Senator said, "merely an increase in subsidies, although that may be necessary.

If that is all we do, however, doubling or even tripling subsidies would at best be short-term fixes, and we would merely be postponing the ultimate demise of the in- dustry."

Daniel K. Inouye of Hawaii by Assistant Secretary of

The Senator from Hawaii is Chairman of the Senate Subcommittee on Merchant Ma- rine and Tourism, and architect of the Ocean

Shipping Act of 1980. Secretary of State

AFL-CIO, and many other labor and industry leaders.

President Of The Coastal

Richard H. Meadows has been elected vice president of The Coastal Corporation, a

Houston-based energy supply company, and of several Coastal subsidiaries. He will be responsible for the product supply and dis- tribution for Coastal's marketing subsidi- aries.

For three years prior to his promotion,

Belcher Oil Company, a Coastal subsidiary based in Miami. His marketing experience in- cudes 10 years with Exxon Company U.S.A.

Opti-Trim, the new systems have been tested with excellent results on ships in regular service.

Economy Sailing has been developed pri- marily for fixed-route vessels whose profit- able operation depends to a great extent on their arrival on time. During a voyage, a ship's progress is influenced by such exter- nal factors as wind, heavy seas, currents, and water depth. To ensure that they will not delay arrival time, ships often begin voyages at high speed and finish at lower speed. As a result, there will be unneces- sarily high fuel consumption because fuel use increases progressively with higher speeds. Thus, arrival 30 minutes before scheduled time can result in extra fuel costs of tens of thousands of dollars throughout the year for certain passenger vessels.

Sailing has been structured for route plan- ning, which is vital in determining time of arrival. Because of expected variations in winds and other external factors, correct route choice will result in considerable fuel savings. But, without use of technical aids, it would be impossible to achieve. Therefore, all values of the factors that can influence ship power requirements are fed into the

ASEA system, which is based on microproc- essor technology. During each voyage, the program is continuously updated as new values and the ship's position are supplied to the computer.

Trials performed with the new Economy

Sailing system indicate that it is suitable for use on all vessels having fixed times of arrival. Significantly, the investment to in- stall the system will be paid back in less than a year after it is operational.

The other new ASEA shipboard fuel con- servation system, Opti-Trim, calculates the trim position of a ship, thus assuring the lowest fuel consumption for any given speed and displacement. Using the system, it is possible to achieve optimum distribution of cargo, ballast and fuel oil. This will result in substantial savings and, as with the

Economy Sailing system, payback time of the investment will be less than one year.

Economy Sailing and Opti-Trim are the latest additions to ASEA's energy-saving program for ships developed under the name "Economy at Sea." They are being mar- keted in the U.S. by ASEA Inc., wholly- owned subsidiary of the ASEA Group.