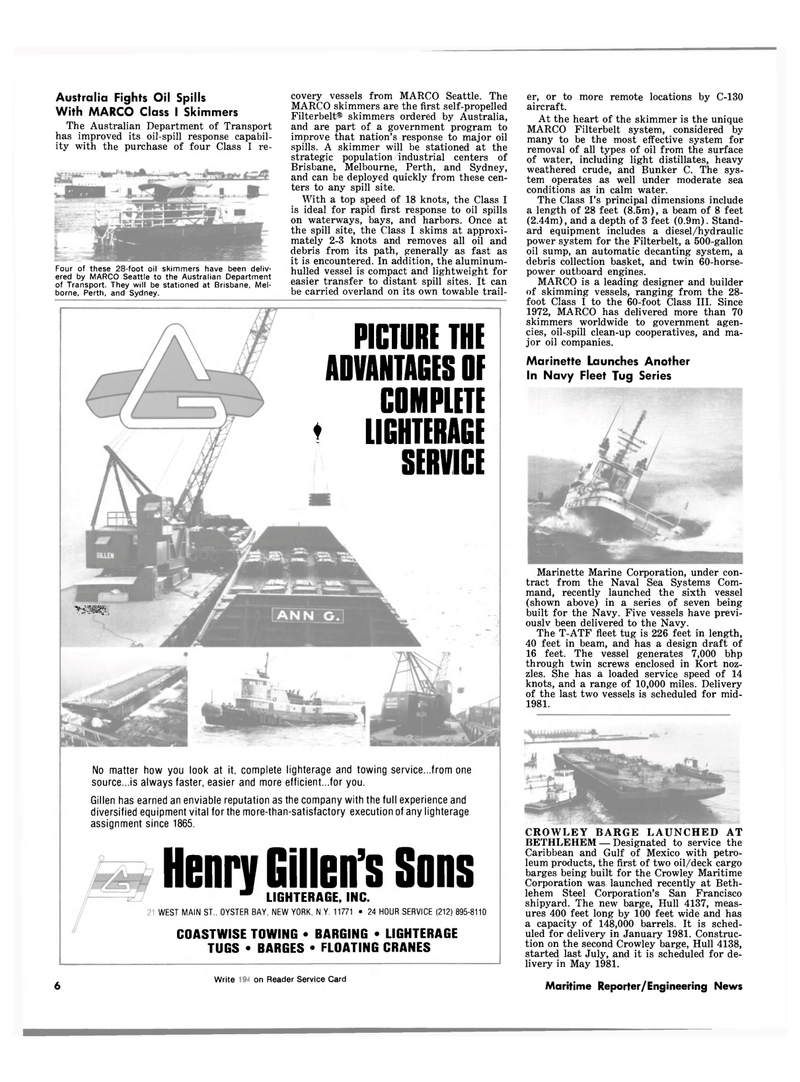 covery vessels from MARCO Seattle. The

MARCO skimmers are the first self-propelled

Filterbelt® skimmers ordered by Australia, and are part of a government program to improve that nation's response to major oil spills. A skimmer will be stationed at the strategic population/industrial centers of

Brisbane, Melbourne, Perth, and Sydney, and can be deployed quickly from these cen- ters to any spill site.

With a top speed of 18 knots, the Class I is ideal for rapid first response to oil spills on waterways, bays, and harbors. Once at the spill site, the Class I skims at approxi- mately 2-3 knots and removes all oil and debris from its path, generally as fast as it is encountered. In addition, the aluminum- hulled vessel is compact and lightweight for easier transfer to distant spill sites. It can be carried overland on its own towable trail-

No matter how you look at it, complete lighterage and towing service...from one source...is always faster, easier and more efficient...for you.

Gillen has earned an enviable reputation as the company with the full experience and diversified equipment vital for the more-than-satisfactory execution of any lighterage assignment since 1865.

Marinette Marine Corporation, under con- tract from the Naval Sea Systems Com- mand, recently launched the sixth vessel (shown above) in a series of seven being built for the Navy. Five vessels have previ- ously been delivered to the Navy.

BETHLEHEM — Designated to service the

Caribbean and Gulf of Mexico with petro- leum products, the first of two oil/deck cargo barges being built for the Crowley Maritime

Corporation was launched recently at Beth- lehem Steel Corporation's San Francisco shipyard. The new barge, Hull 4137, meas- ures 400 feet long by 100 feet wide and has a capacity of 148,000 barrels. It is sched- uled for delivery in January 1981. Construc- tion on the second Crowley barge, Hull 4138, started last July, and it is scheduled for de- livery in May 1981.

With MARCO Class I Skimmers

Four of these 28-foot oil skimmers have been deliv- ered by MARCO Seattle to the Australian Department of Transport. They will be stationed at Brisbane, Mel- borne, Perth, and Sydney. er, or to more remote locations by C-130 aircraft.

At the heart of the skimmer is the unique

MARCO Filterbelt system, considered by many to be the most effective system for removal of all types of oil from the surface of water, including light distillates, heavy weathered crude, and Bunker C. The sys- tem operates as well under moderate sea conditions as in calm water.

The Class I's principal dimensions include a length of 28 feet (8.5m), a beam of 8 feet (2.44m), and a depth of 3 feet (0.9m). Stand- ard equipment includes a diesel/hydraulic power system for the Filterbelt, a 500-gallon oil sump, an automatic decanting system, a debris collection basket, and twin 60-horse- power outboard engines.

MARCO is a leading designer and builder of skimming vessels, ranging from the 28- foot Class I to the 60-foot Class III. Since 1972, MARCO has delivered more than 70 skimmers worldwide to government agen- cies, oil-spill clean-up cooperatives, and ma- jor oil companies.