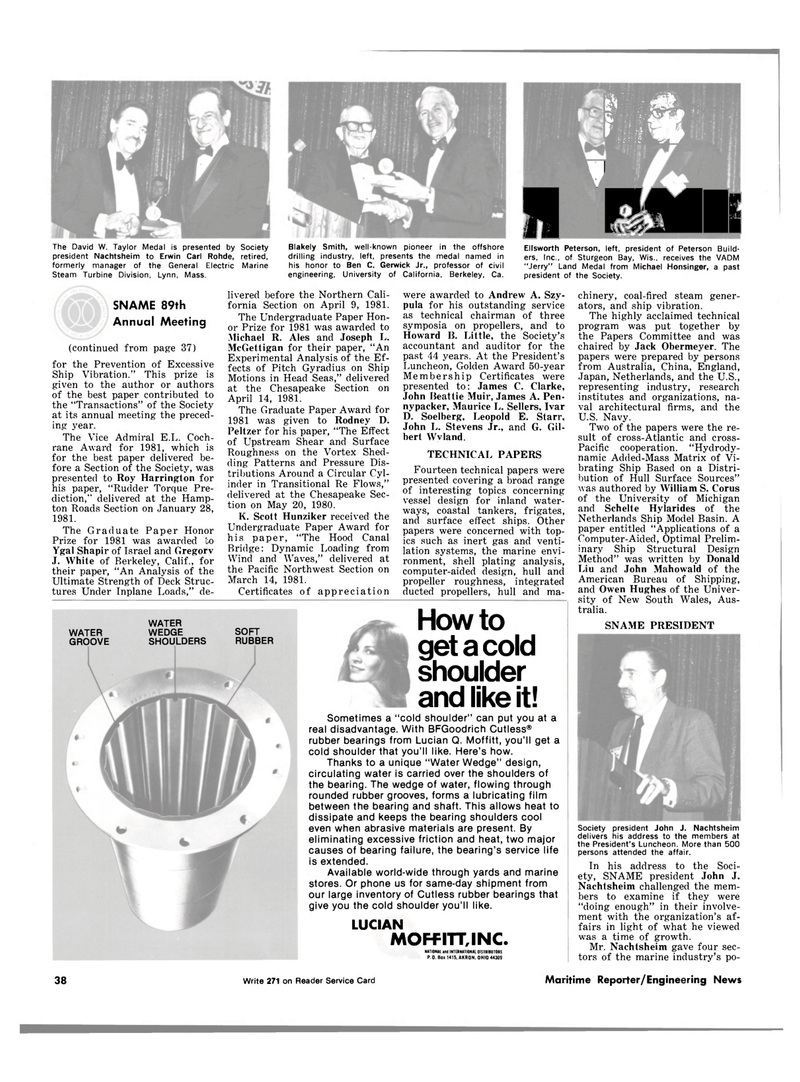 Annual Meeting (continued from page 37) for the Prevention of Excessive

Ship Vibration." This prize is given to the author or authors of the best paper contributed to the "Transactions" of the Society at its annual meeting the preced- ing year.

The Vice Admiral E.L. Coch- rane Award for 1981, which is for the best paper delivered be- fore a Section of the Society, was presented to Roy Harrington for his paper, "Rudder Torque Pre- diction," delivered at the Hamp- ton Roads Section on January 28, 1981.

Ygal Shapir of Israel and Gregorv

J. White of Berkeley, Calif., for their paper, "An Analysis of the

The Undergraduate Paper Hon- or Prize for 1981 was awarded to

McGettigan for their paper, "An

Experimental Analysis of the Ef- fects of Pitch Gyradius on Ship

Motions in Head Seas," delivered at the Chesapeake Section on

The Graduate Paper Award for 1981 was given to Rodney D.

Peltzer for his paper, "The Effect of Upstream Shear and Surface

Roughness on the Vortex Shed- ding Patterns and Pressure Dis- tributions Around a Circular Cyl- inder in Transitional Re Flows," delivered at the Chesapeake Sec- tion on May 20, 1980.

Undergraduate Paper Award for his paper, "The Hood Canal

Wind and Waves," delivered at the Pacific Northwest Section on

Certificates of appreciation were awarded to Andrew A. Szy- pula for his outstanding service as technical chairman of three symposia on propellers, and to

Howard B. Little, the Society's accountant and auditor for the past 44 years. At the President's

How to get a cold shoulder and like it!

Sometimes a "cold shoulder" can put you at a real disadvantage. With BFGoodrich Cutless® rubber bearings from Lucian Q. Moffitt, you'll get a cold shoulder that you'll like. Here's how.

Thanks to a unique "Water Wedge" design, circulating water is carried over the shoulders of the bearing. The wedge of water, flowing through rounded rubber grooves, forms a lubricating film between the bearing and shaft. This allows heat to dissipate and keeps the bearing shoulders cool even when abrasive materials are present. By eliminating excessive friction and heat, two major causes of bearing failure, the bearing's service life is extended.

Available world-wide through yards and marine stores. Or phone us for same-day shipment from our large inventory of Cutless rubber bearings that give you the cold shoulder you'll like.

The highly acclaimed technical program was put together by the Papers Committee and was chaired by Jack Obermeyer. The papers were prepared by persons from Australia, China, England,

Pacific cooperation. "Hydrody- namic Added-Mass Matrix of Vi- brating Ship Based on a Distri- bution of Hull Surface Sources" was authored by William S. Corus of the University of Michigan and Schelte Hylarides of the

Netherlands Ship Model Basin. A paper entitled "Applications of a

Method" was written by Donald

Liu and John Mahowald of the

Society president John J. Nachtsheim delivers his address to the members at the President's Luncheon. More than 500 persons attended the affair.

In his address to the Soci- ety, SNAME president John J.

Nachtsheim challenged the mem- bers to examine if they were "doing enough" in their involve- ment with the organization's af- fairs in light of what he viewed was a time of growth.