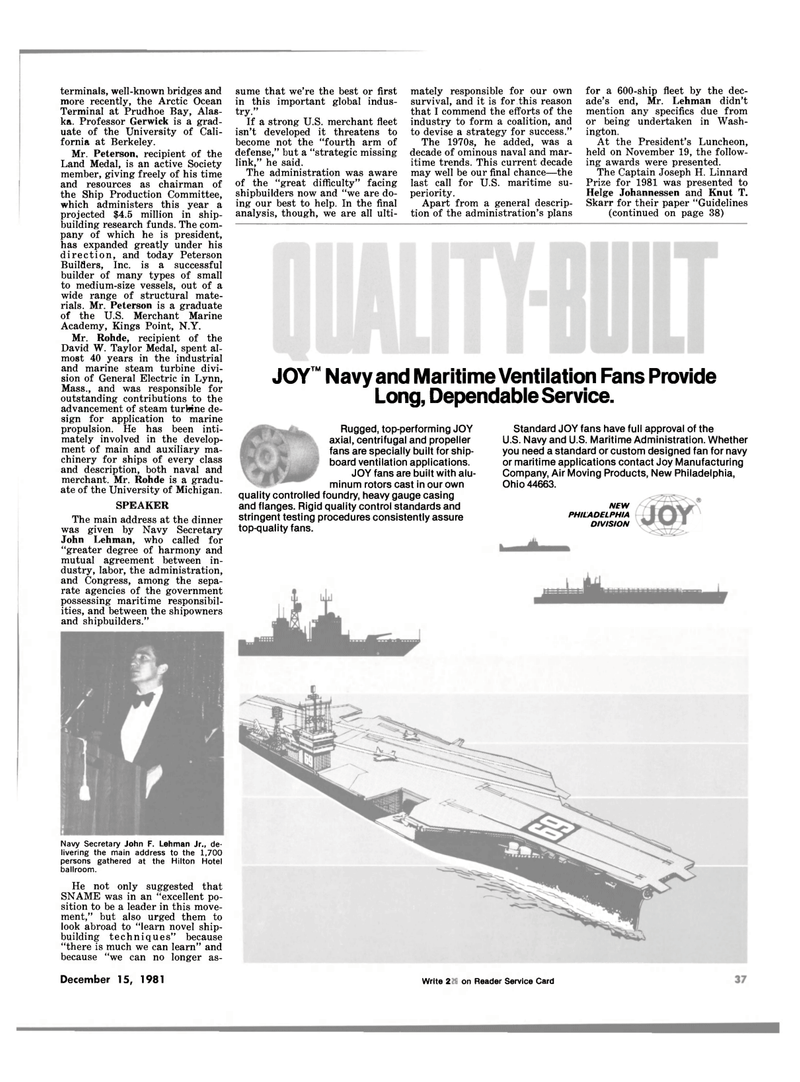 Terminal at Prudhoe Bay, Alas- ka. Professor Gerwick is a grad- uate of the University of Cali- fornia at Berkeley.

Mr. Peterson, recipient of the

Land Medal, is an active Society member, giving freely of his time and resources as chairman of the Ship Production Committee, which administers this year a projected $4.5 million in ship- building research funds. The com- pany of which he is president, has expanded greatly under his direction, and today Peterson

Builders, Inc. is a successful builder of many types of small to medium-size vessels, out of a wide range of structural mate- rials. Mr. Peterson is a graduate of the U.S. Merchant Marine

Mr. Rohde, recipient of the

Mass., and was responsible for outstanding contributions to the advancement of steam turMne de- sign for application to marine propulsion. He has been inti- mately involved in the develop- ment of main and auxiliary ma- chinery for ships of every class and description, both naval and merchant. Mr. Rohde is a gradu- ate of the University of Michigan.

The main address at the dinner was given by Navy Secretary

John Lehman, who called for "greater degree of harmony and mutual agreement between in- dustry, labor, the administration, and Congress, among the sepa- rate agencies of the government possessing maritime responsibil- ities, and between the shipowners and shipbuilders."

He not only suggested that

SNAME was in an "excellent po- sition to be a leader in this move- ment," but also urged them to look abroad to "learn novel ship- building techniques" because "there is much we can learn" and because "we can no longer as- sume that we're the best or first in this important global indus- try."

If a strong U.S. merchant fleet isn't developed it threatens to become not the "fourth arm of defense," but a "strategic missing link," he said.

The administration was aware of the "great difficulty" facing shipbuilders now and "we are do- ing our best to help. In the final analysis, though, we are all ulti- mately responsible for our own survival, and it is for this reason that I commend the efforts of the industry to form a coalition, and to devise a strategy for success."

The 1970s, he added, was a decade of ominous naval and mar- itime trends. This current decade may well be our final chance—the last call for U.S. maritime su- periority.

Apart from a general descrip- tion of the administration's plans for a 600-ship fleet by the dec- ade's end, Mr. Lehman didn't mention any specifics due from or being undertaken in Wash- ington.

At the President's Luncheon, held on November 19, the follow- ing awards were presented.

Prize for 1981 was presented to

Skarr for their paper "Guidelines (continued on page 38)

Standard JOY fans have full approval of the

U.S. Navy and U.S. Maritime Administration. Whether you need a standard or custom designed fan for navy or maritime applications contact Joy Manufacturing