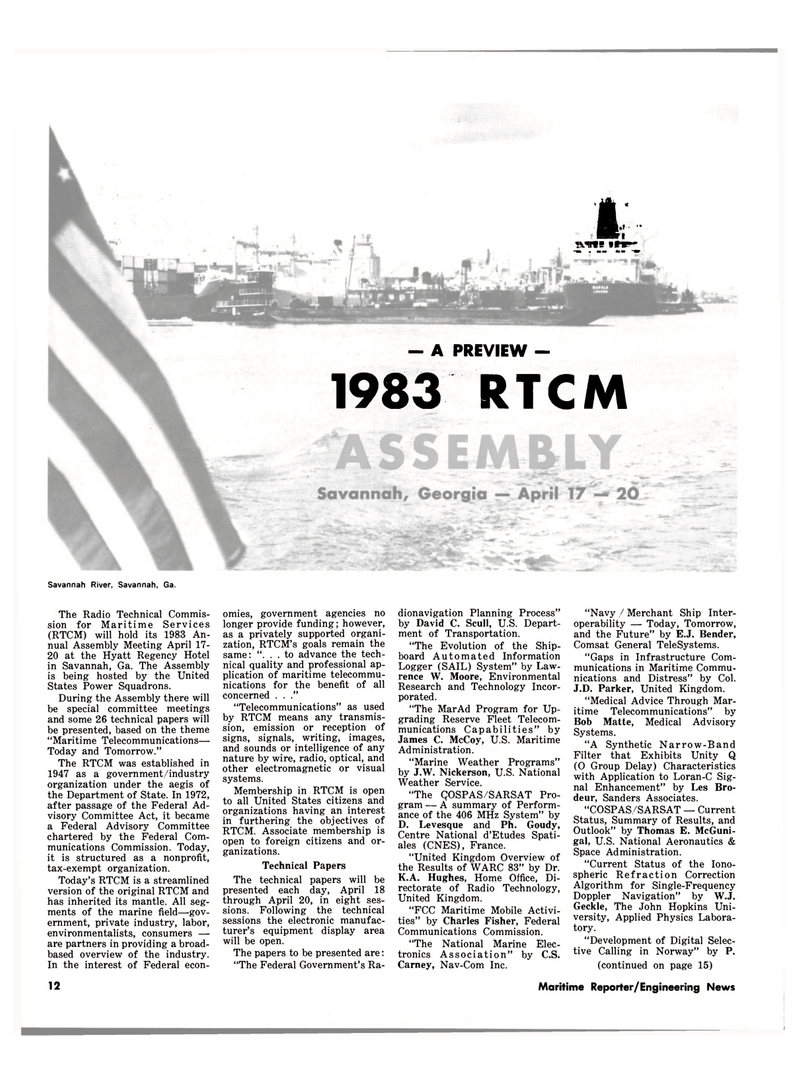 The Radio Technical Commis- sion for Maritime Services (RTCM) will hold its 1983 An- nual Assembly Meeting April 17- 20 at the Hyatt Regency Hotel in Savannah, Ga. The Assembly is being hosted by the United

During the Assembly there will be special committee meetings and some 26 technical papers will be presented, based on the theme "Maritime Telecommunications—

Today's RTCM is a streamlined version of the original RTCM and has inherited its mantle. All seg- ments of the marine field—gov- ernment, private industry, labor, environmentalists, consumers — are partners in providing a broad- based overview of the industry.

In the interest of Federal econ- omies, government agencies no longer provide funding; however, as a privately supported organi- zation, RTCM's goals remain the same: ". . . to advance the tech- nical quality and professional ap- plication of maritime telecommu- nications for the benefit of all concerned . . ." "Telecommunications" as used by RTCM means any transmis- sion, emission or reception of signs, signals, writing, images, and sounds or intelligence of any nature by wire, radio, optical, and other electromagnetic or visual systems.

RTCM. Associate membership is open to foreign citizens and or- ganizations.

The technical papers will be presented each day, April 18 through April 20, in eight ses- sions. Following the technical sessions the electronic manufac- turer's equipment display area will be open.

The papers to be presented are: "The Federal Government's Ra- dionavigation Planning Process" by David C. Scull, U.S. Depart- ment of Transportation. "The Evolution of the Ship- board Automated Information

Weather Service. "The QOSPAS/SARSAT Pro- gram — A summary of Perform- ance of the 406 MHz System" by

Status, Summary of Results, and