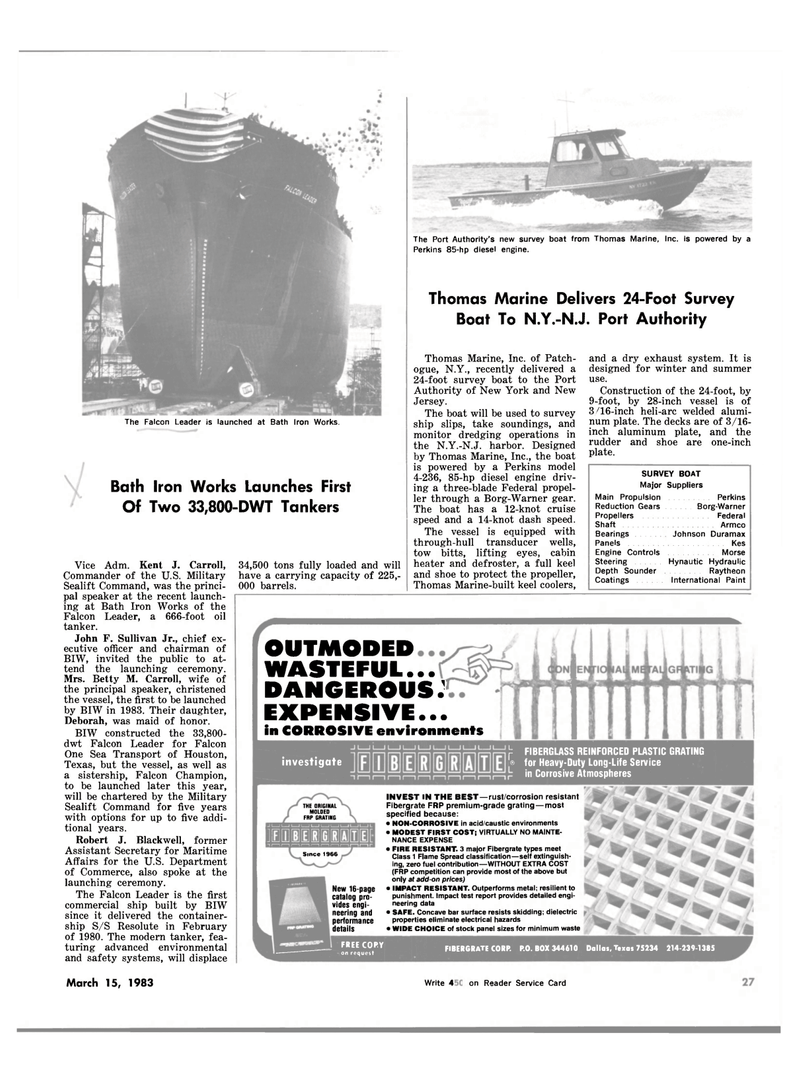 The Falcon Leader is launched at Bath Iron Works.

Commander of the U.S. Military

Sealift Command, was the princi- pal speaker at the recent launch- ing at Bath Iron Works of the

BIW, invited the public to at- tend the launching ceremony.

Mrs. Betty M. Carroll, wife of the principal speaker, christened the vessel, the first to be launched by BIW in 1983. Their daughter,

Deborah, was maid of honor.

One Sea Transport of Houston,

Texas, but the vessel, as well as a sistership, Falcon Champion, to be launched later this year, will be chartered by the Military

Sealift Command for five years with options for up to five addi- tional years.

Affairs for the U.S. Department of Commerce, also spoke at the launching ceremony.

The Falcon Leader is the first commercial ship built by BIW since it delivered the container- ship S/S Resolute in February of 1980. The modern tanker, fea- turing advanced environmental and safety systems, will displace 34,500 tons fully loaded and will have a carrying capacity of 225,- 000 barrels.

Authority of New York and New

The boat will be used to survey ship slips, take soundings, and monitor dredging operations in the N.Y.-N.J. harbor. Designed by Thomas Marine, Inc., the boat is powered by a Perkins model 4-236, 85-hp diesel engine driv- ing a three-blade Federal propel- ler through a Borg-Warner gear.

The boat has a 12-knot cruise speed and a 14-knot dash speed.

The vessel is equipped with through-hull transducer wells, tow bitts, lifting eyes, cabin heater and defroster, a full keel and shoe to protect the propeller,

Thomas Marine-built keel coolers, and a dry exhaust system. It is designed for winter and summer use.

Construction of the 24-foot, by 9-foot, by 28-inch vessel is of 3/16-inch heli-arc welded alumi- num plate. The decks are of 3/16- inch aluminum plate, and the rudder and shoe are one-inch plate.

INVEST IN THE BEST—rust/corrosion resistant

The Port Authority's new survey boat from Thomas Marine, Inc. is powered by a