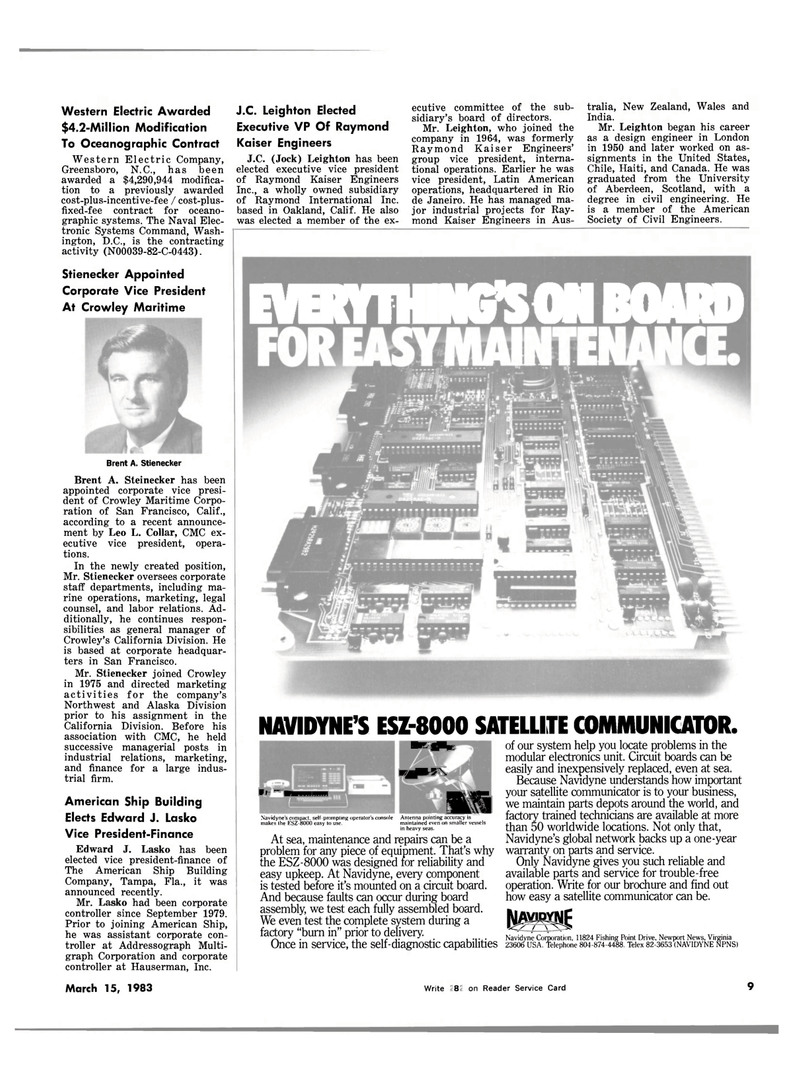 In the newly created position,

Crowley's California Division. He is based at corporate headquar- ters in San Francisco.

Mr. Stienecker joined Crowley in 1975 and directed marketing activities for the company's

Northwest and Alaska Division prior to his assignment in the

California Division. Before his association with CMC, he held successive managerial posts in industrial relations, marketing, and finance for a large indus- trial firm.

Edward J. Lasko has been elected vice president-finance of

Mr. Lasko had been corporate controller since September 1979.

Prior to joining American Ship, he was assistant corporate con- troller at Addressograph Multi- graph Corporation and corporate controller at Hauserman, Inc.

Inc., a wholly owned subsidiary of Raymond International Inc. based in Oakland, Calif. He also was elected a member of the ex- ecutive committee of the sub- sidiary's board of directors.

Mr. Leighton, who joined the company in 1964, was formerly

Mr. Leighton began his career as a design engineer in London in 1950 and later worked on as- signments in the United States,

Chile, Haiti, and Canada. He was graduated from the University of Aberdeen, Scotland, with a degree in civil engineering. He is a member of the American

Navidyne's compact, self-prompting operator's console Antenna pointing accuracy is makes the ESZ-8000 easy to use. maintained even on smaller vessels in heavy seas.

At sea, maintenance and repairs can be a problem for any piece of equipment. That's why the ESZ-8000 was designed for reliability and easy upkeep. At Navidyne, every component is tested before it's mounted on a circuit board.

And because faults can occur during board assembly, we test each fully assembled board.

We even test the complete system during a factory "burn in" prior to delivery.

Once in service, the self-diagnostic capabilities of our system help you locate problems in the modular electronics unit. Circuit boards can be easily and inexpensively replaced, even at sea.

Because Navidyne understands how important your satellite communicator is to your business, we maintain parts depots around the world, and factory trained technicians are available at more than 50 worldwide locations. Not only that,

Navidyne's global network backs up a one-year warranty on parts and service.

Only Navidyne gives you such reliable and available parts and service for trouble-free operation. Write for our brochure and find out how easy a satellite communicator can be. eras