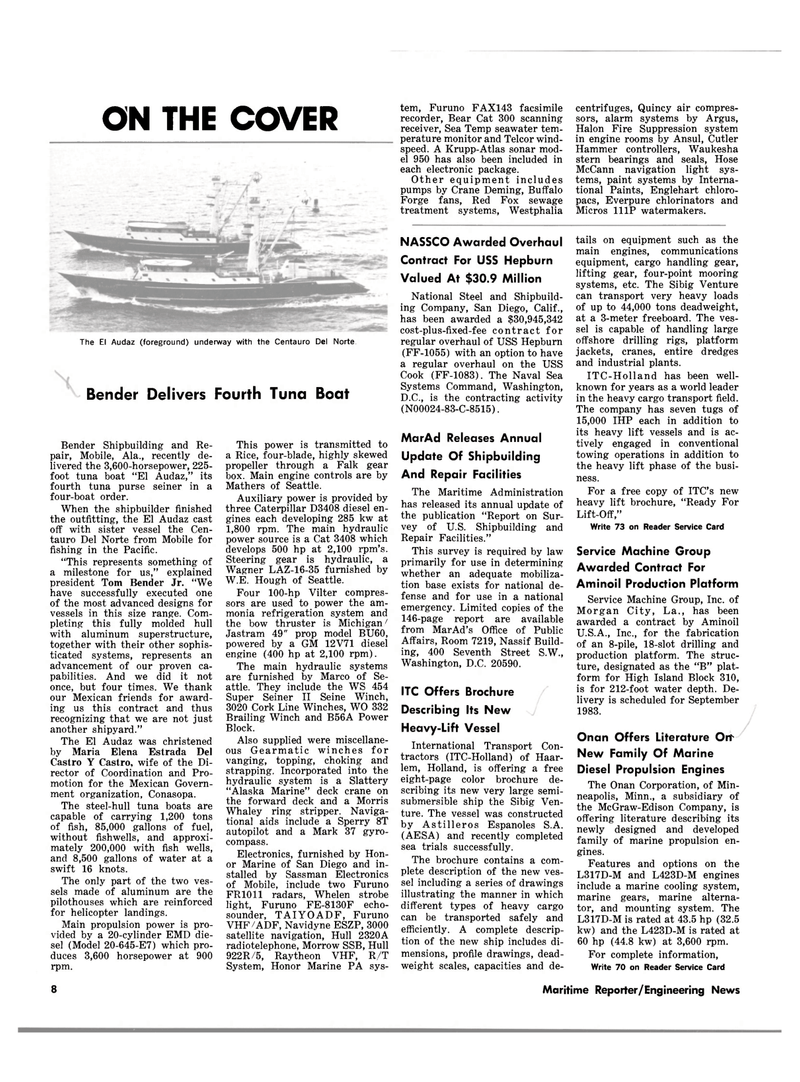 When the shipbuilder finished the outfitting, the El Audaz cast off with sister vessel the Cen- tauro Del Norte from Mobile for fishing in the Pacific. "This represents something of a milestone for us," explained president Tom Bender Jr. "We have successfully executed one of the most advanced designs for vessels in this size range. Com- pleting this fully molded hull with aluminum superstructure, together with their other sophis- ticated systems, represents an advancement of our proven ca- pabilities. And we did it not once, but four times. We thank our Mexican friends for award- ing us this contract and thus recognizing that we are not just another shipyard."

The El Audaz was christened by Maria Elena Estrada Del

Castro Y Castro, wife of the Di- rector of Coordination and Pro- motion for the Mexican Govern- ment organization, Conasopa.

The only part of the two ves- sels made of aluminum are the pilothouses which are reinforced for helicopter landings.

This power is transmitted to a Rice, four-blade, highly skewed propeller through a Falk gear box. Main engine controls are by

Steering gear is hydraulic, a

The main hydraulic systems are furnished by Marco of Se- attle. They include the WS 454

Also supplied were miscellane- ous Gearmatic winches for vanging, topping, choking and strapping. Incorporated into the hydraulic system is a Slattery "Alaska Marine" deck crane on the forward deck and a Morris

Electronics, furnished by Hon- or Marine of San Diego and in- stalled by Sassman Electronics of Mobile, include two Furuno

National Steel and Shipbuild- ing Company, San Diego, Calif., has been awarded a §30,945,342 cost-plus-fixed-fee contract for regular overhaul of USS Hepburn (FF-1055) with an option to have a regular overhaul on the USS

The Maritime Administration has released its annual update of the publication "Report on Sur- vey of U.S. Shipbuilding and

This survey is required by law primarily for use in determining whether an adequate mobiliza- tion base exists for national de- fense and for use in a national emergency. Limited copies of the 146-page report are available from MarAd's Office of Public

The brochure contains a com- plete description of the new ves- sel including a series of drawings illustrating the manner in which different types of heavy cargo can be transported safely and efficiently. A complete descrip- tion of the new ship includes di- mensions, profile drawings, dead- weight scales, capacities and de- centrifuges, Quincy air compres- sors, alarm systems by Argus,

ITC-Holland has been well- known for years as a world leader in the heavy cargo transport field.

For a free copy of ITC's new heavy lift brochure, "Ready For

Morgan City, La., has been awarded a contract by Aminoil

U.S.A., Inc., for the fabrication of an 8-pile, 18-slot drilling and production platform. The struc- ture, designated as the "B" plat- form for High Island Block 310, is for 212-foot water depth. De- livery is scheduled for September 1983.

The Onan Corporation, of Min- neapolis, Minn., a subsidiary of the McGraw-Edison Company, is offering literature describing its newly designed and developed family of marine propulsion en- gines.

Features and options on the