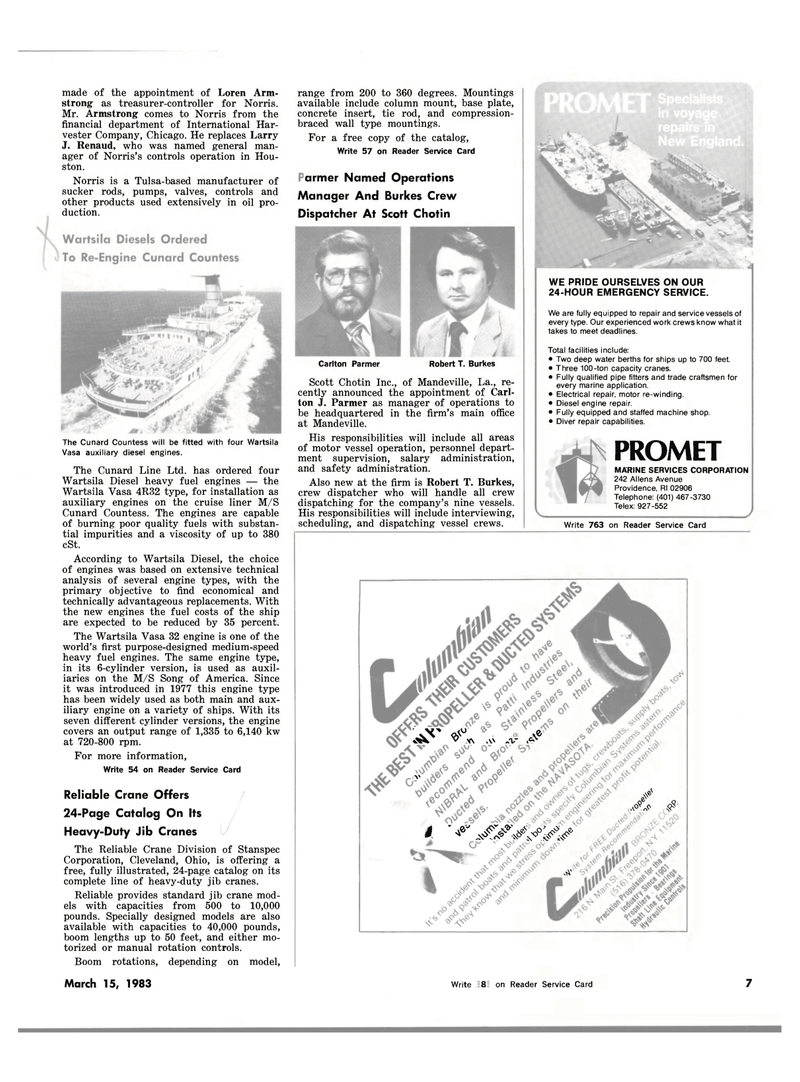 made of the appointment of Loren Arm- strong as treasurer-controller for Norris.

Norris is a Tulsa-based manufacturer of sucker rods, pumps, valves, controls and other products used extensively in oil pro- duction.

The Cunard Countess will be fitted with four Wartsila

Cunard Countess. The engines are capable of burning poor quality fuels with substan- tial impurities and a viscosity of up to 380 cSt.

According to Wartsila Diesel, the choice of engines was based on extensive technical analysis of several engine types, with the primary objective to find economical and technically advantageous replacements. With the new engines the fuel costs of the ship are expected to be reduced by 35 percent.

The Wartsila Vasa 32 engine is one of the world's first purpose-designed medium-speed heavy fuel engines. The same engine type, in its 6-cylinder version, is used as auxil- iaries on the M/S Song of America. Since it was introduced in 1977 this engine type has been widely used as both main and aux- iliary engine on a variety of ships. With its seven different cylinder versions, the engine covers an output range of 1,335 to 6,140 kw at 720-800 rpm.

The Reliable Crane Division of Stanspec

Reliable provides standard jib crane mod- els with capacities from 500 to 10,000 pounds. Specially designed models are also available with capacities to 40,000 pounds, boom lengths up to 50 feet, and either mo- torized or manual rotation controls.

For a free copy of the catalog,

Scott Chotin Inc., of Mandeville, La., re- cently announced the appointment of Carl- ton J. Parmer as manager of operations to be headquartered in the firm's main office at Mandeville.

His responsibilities will include all areas of motor vessel operation, personnel depart- ment supervision, salary administration, and safety administration.

Also new at the firm is Robert T. Burkes, crew dispatcher who will handle all crew dispatching for the company's nine vessels.

His responsibilities will include interviewing, scheduling, and dispatching vessel crews.

WE PRIDE OURSELVES ON OUR 24-HOUR EMERGENCY SERVICE.

We are fully equipped to repair and service vessels of every type. Our experienced work crews know what it takes to meet deadlines.