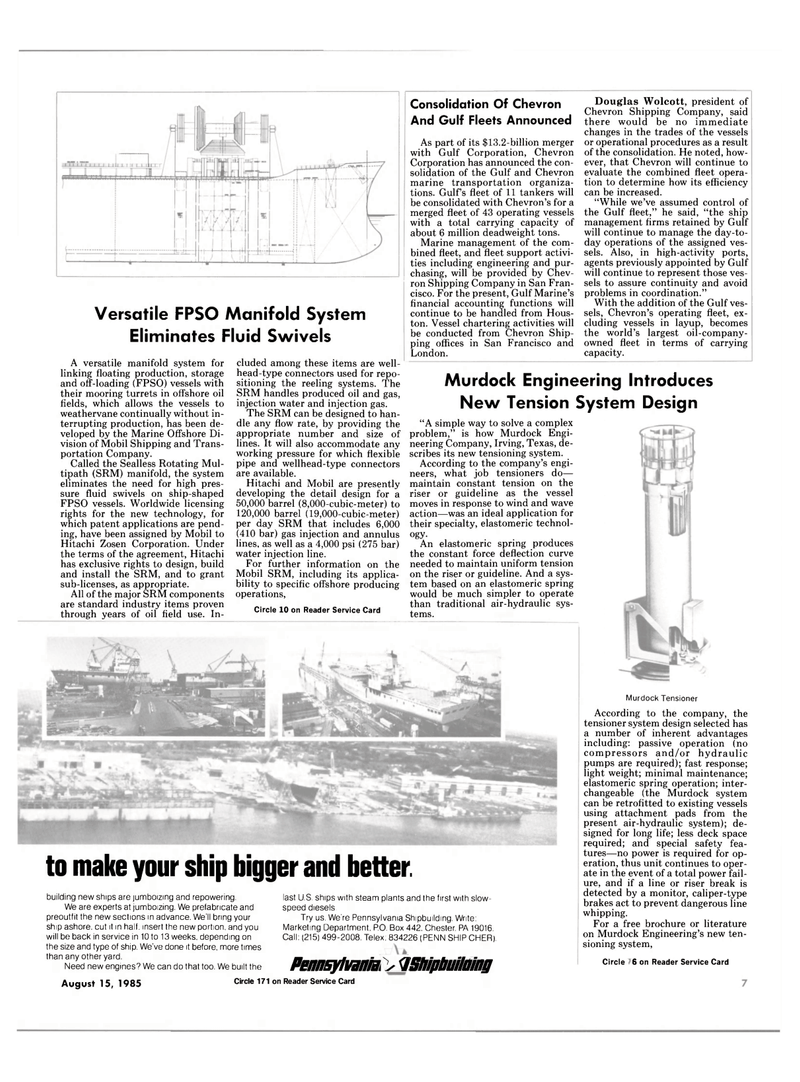 A versatile manifold system for linking floating production, storage and off-loading (FPSO) vessels with their mooring turrets in offshore oil fields, which allows the vessels to weathervane continually without in- terrupting production, has been de- veloped by the Marine Offshore Di- vision of Mobil Shipping and Trans- portation Company.

FPSO vessels. Worldwide licensing rights for the new technology, for which patent applications are pend- ing, have been assigned by Mobil to

Hitachi Zosen Corporation. Under the terms of the agreement, Hitachi has exclusive rights to design, build and install the SRM, and to grant sub-licenses, as appropriate.

All of the major SRM components are standard industry items proven through years of oil field use. In- cluded among these items are well- head-type connectors used for repo- sitioning the reeling systems. The

The SRM can be designed to han- dle any flow rate, by providing the appropriate number and size of lines. It will also accommodate any working pressure for which flexible pipe and wellhead-type connectors are available.

For further information on the

Circle 10 on Reader Service Card to make your ship bigger and better. building new ships are jumboizing and repowering.

We are experts at jumboizing. We prefabricate and preoutfit the new sections in advance. We'll bring your ship ashore, cut it in half, insert the new portion, and you will be back in service in 10 to 13 weeks, depending on the size and type of ship. We've done it before, more times than any other yard.

Need new engines? We can do that too. We built the

According to the company, the tensioner system design selected has a number of inherent advantages including: passive operation (no compressors and/or hydraulic pumps are required); fast response; light weight; minimal maintenance; elastomeric spring operation; inter- changeable (the Murdock system can be retrofitted to existing vessels using attachment pads from the present air-hydraulic system); de- signed for long life; less deck space required; and special safety fea- tures—no power is required for op- eration, thus unit continues to oper- ate in the event of a total power fail- ure, and if a line or riser break is detected by a monitor, caliper-type brakes act to prevent dangerous line whipping.

For a free brochure or literature on Murdock Engineering's new ten- sioning system,

As part of its $13.2-billion merger with Gulf Corporation, Chevron

Corporation has announced the con- solidation of the Gulf and Chevron marine transportation organiza- tions. Gulf's fleet of 11 tankers will be consolidated with Chevron's for a merged fleet of 43 operating vessels with a total carrying capacity of about 6 million deadweight tons.

Marine management of the com- bined fleet, and fleet support activi- ties including engineering and pur- chasing, will be provided by Chev- ron Shipping Company in San Fran- cisco. For the present, Gulf Marine's financial accounting functions will continue to be handled from Hous- ton. Vessel chartering activities will be conducted from Chevron Ship- ping offices in San Francisco and

Chevron Shipping Company, said there would be no immediate changes in the trades of the vessels or operational procedures as a result of the consolidation. He noted, how- ever, that Chevron will continue to evaluate the combined fleet opera- tion to determine how its efficiency can be increased. "While we've assumed control of the Gulf fleet," he said, "the ship management firms retained by Gulf will continue to manage the day-to- day operations of the assigned ves- sels. Also, in high-activity ports, agents previously appointed by Gulf will continue to represent those ves- sels to assure continuity and avoid problems in coordination."

According to the company's engi- neers, what job tensioners do— maintain constant tension on the riser or guideline as the vessel moves in response to wind and wave action—was an ideal application for their specialty, elastomeric technol- ogy.

An elastomeric spring produces the constant force deflection curve needed to maintain uniform tension on the riser or guideline. And a sys- tem based on an elastomeric spring would be much simpler to operate than traditional air-hydraulic sys- tems.