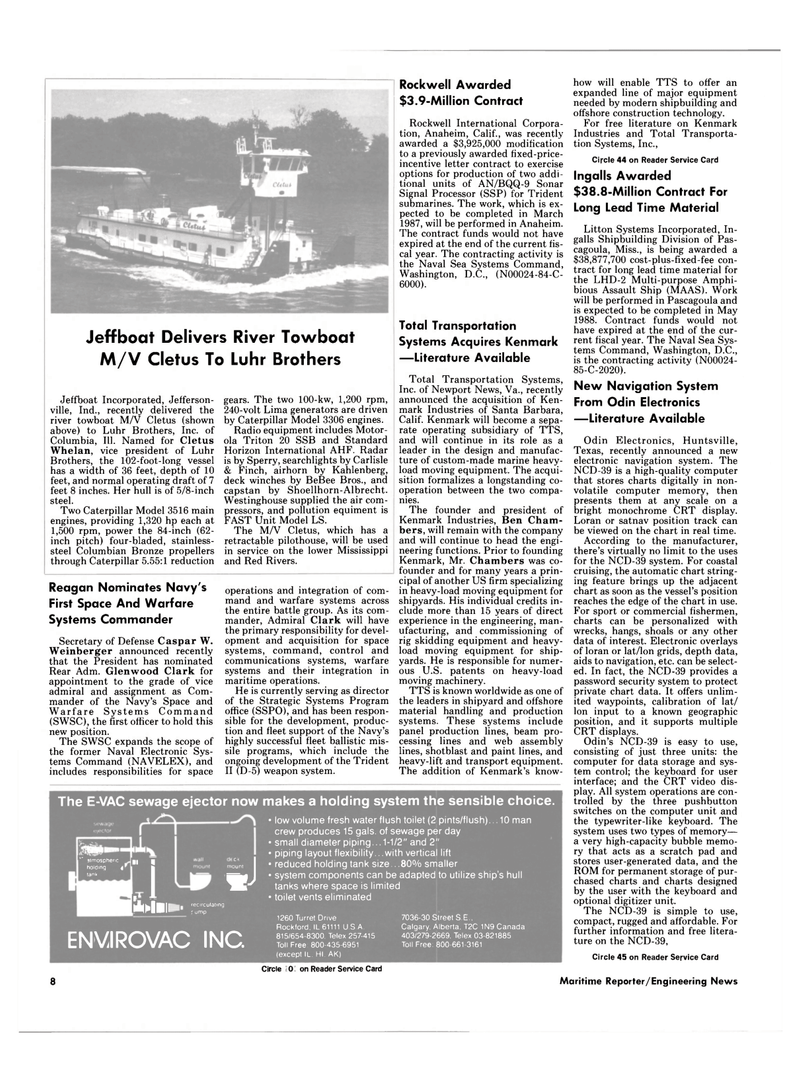 Horizon International AHF. Radar is by Sperry, searchlights by Carlisle & Finch, airhorn by Kahlenberg, deck winches by Befiee Bros., and capstan by Shoellhorn-Albrecht.

Westinghouse supplied the air com- pressors, and pollution equiment is

The M/V Cletus, which has a retractable pilothouse, will be used in service on the lower Mississippi and Red Rivers.

Weinberger announced recently that the President has nominated

Rear Adm. Glenwood Clark for appointment to the grade of vice admiral and assignment as Com- mander of the Navy's Space and

The SWSC expands the scope of the former Naval Electronic Sys- tems Command (NAVELEX), and includes responsibilities for space operations and integration of com- mand and warfare systems across the entire battle group. As its com- mander, Admiral Clark will have the primary responsibility for devel- opment and acquisition for space systems, command, control and communications systems, warfare systems and their integration in maritime operations.

He is currently serving as director of the Strategic Systems Program office (SSPO), and has been respon- sible for the development, produc- tion and fleet support of the Navy's highly successful fleet ballistic mis- sile programs, which include the ongoing development of the Trident

Signal Processor (SSP) for Trident submarines. The work, which is ex- pected to be completed in March 1987, will be performed in Anaheim.

The contract funds would not have expired at the end of the current fis- cal year. The contracting activity is the Naval Sea Systems Command,

Calif. Kenmark will become a sepa- rate operating subsidiary of TTS, and will continue in its role as a leader in the design and manufac- ture of custom-made marine heavy- load moving equipment. The acqui- sition formalizes a longstanding co- operation between the two compa- nies.

The founder and president of

Kenmark Industries, Ben Cham- bers, will remain with the company and will continue to head the engi- neering functions. Prior to founding

TTS is known worldwide as one of the leaders in shipyard and offshore material handling and production systems. These systems include panel production lines, beam pro- cessing lines and web assembly lines, shotblast and paint lines, and heavy-lift and transport equipment.

The addition of Kenmark's know- how will enable TTS to offer an expanded line of major equipment needed by modern shipbuilding and offshore construction technology.

For free literature on Kenmark

Litton Systems Incorporated, In- galls Shipbuilding Division of Pas- cagoula, Miss., is being awarded a $38,877,700 cost-plus-fixed-fee con- tract for long lead time material for the LHD-2 Multi-purpose Amphi- bious Assault Ship (MAAS). Work will be performed in Pascagoula and is expected to be completed in May 1988. Contract funds would not have expired at the end of the cur- rent fiscal year. The Naval Sea Sys- tems Command, Washington, D.C., is the contracting activity (N00024- 85-C-2020).

NCD-39 is a high-quality computer that stores charts digitally in non- volatile computer memory, then presents them at any scale on a bright monochrome CRT display.

Loran or satnav position track can be viewed on the chart in real time.

According to the manufacturer, there's virtually no limit to the uses for the NCD-39 system. For coastal cruising, the automatic chart string- ing feature brings up the adjacent chart as soon as the vessel's position reaches the edge of the chart in use.

For sport or commercial fishermen, charts can be personalized with wrecks, hangs, shoals or any other data of interest. Electronic overlays of loran or lat/lon grids, depth data, aids to navigation, etc. can be select- ed. In fact, the NCD-39 provides a password security system to protect private chart data. It offers unlim- ited waypoints, calibration of lat/

Ion input to a known geographic position, and it supports multiple

Odin's NCD-39 is easy to use, consisting of just three units: the computer for data storage and sys- tem control; the keyboard for user interface; and the CRT video dis- play. All system operations are con- trolled by the three pushbutton switches on the computer unit and the typewriter-like keyboard. The system uses two types of memory— a very high-capacity bubble memo- ry that acts as a scratch pad and stores user-generated data, and the

ROM for permanent storage of pur- chased charts and charts designed by the user with the keyboard and optional digitizer unit.

The NCD-39 is simple to use, compact, rugged and affordable. For further information and free litera- ture on the NCD-39,