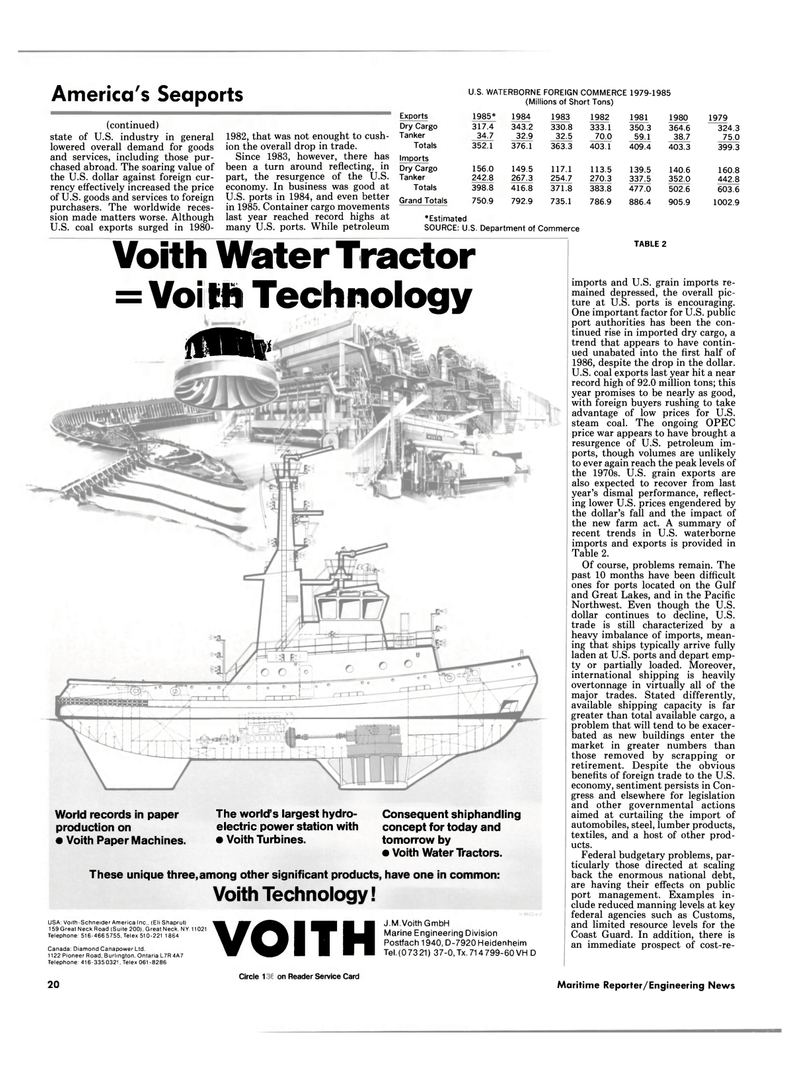 America's Seaports U.S. WATERBORNE FOREIGN COMMERCE 1979-1985 (continued) state of U.S. industry in general lowered overall demand for goods and services, including those pur- chased abroad. The soaring value of the U.S. dollar against foreign cur- rency effectively increased the price of U.S. goods and services to foreign purchasers. The worldwide reces- sion made matters worse. Although

Since 1983, however, there has been a turn around reflecting, in part, the resurgence of the U.S. economy. In business was good at

U.S. ports in 1984, and even better in 1985. Container cargo movements last year reached record highs at many U.S. ports. While petroleum (Millions of Short Tons)

These unique three, among other significant products, have one in common:

One important factor for U.S. public port authorities has been the con- tinued rise in imported dry cargo, a trend that appears to have contin- ued unabated into the first half of 1986, despite the drop in the dollar.

U.S. coal exports last year hit a near record high of 92.0 million tons; this year promises to be nearly as good, with foreign buyers rushing to take advantage of low prices for U.S. steam coal. The ongoing OPEC price war appears to have brought a resurgence of U.S. petroleum im- ports, though volumes are unlikely to ever again reach the peak levels of the 1970s. U.S. grain exports are also expected to recover from last year's dismal performance, reflect- ing lower U.S. prices engendered by the dollar's fall and the impact of the new farm act. A summary of recent trends in U.S. waterborne imports and exports is provided in

Of course, problems remain. The past 10 months have been difficult ones for ports located on the Gulf and Great Lakes, and in the Pacific

Northwest. Even though the U.S. dollar continues to decline, U.S. trade is still characterized by a heavy imbalance of imports, mean- ing that ships typically arrive fully laden at U.S. ports and depart emp- ty or partially loaded. Moreover, international shipping is heavily overtonnage in virtually all of the major trades. Stated differently, available shipping capacity is far greater than total available cargo, a problem that will tend to be exacer- bated as new buildings enter the market in greater numbers than those removed by scrapping or retirement. Despite the obvious benefits of foreign trade to the U.S. economy, sentiment persists in Con- gress and elsewhere for legislation and other governmental actions aimed at curtailing the import of automobiles, steel, lumber products, textiles, and a host of other prod- ucts.

Federal budgetary problems, par- ticularly those directed at scaling back the enormous national debt, are having their effects on public port management. Examples in- clude reduced manning levels at key federal agencies such as Customs, and limited resource levels for the

Coast Guard. In addition, there is an immediate prospect of cost-re- 20