October 15-18 Bayside Exposition Center, Boston When this year's Fish Expo opens its doors in Boston, October 15-18, it will be celebrating its 20th anniversary as the world's largest commercial fishing exposition. On hand for the event will be more than 500 exhibitors, whose displays will be conveniently assembled on one floor at Boston's Bayside Exposition Center, a new location for the Boston edition of the show, which on alternate years is held in Seattle.

At the show, visitors will be able to inspect the latest in commercial fishing gear, boats, supplies, equipment, and services offered by companies throughout the U.S. as well as worldwide. The international presence will be stronger than ever this year, with firms from Canada, Denmark, France, Germany, Great Britain, Iceland, Ireland, Norway, Portugal, and Sweden represented.

While there will be much to learn about the latest developments in the fishing industry by viewing the many exhibits, additional information on activities that affect a fisherman's livelihood will be offered through the Fish Expo Seminar Program.

Seminar Agenda Wednesday, October 15 Tracking the Catch: The Women's Fisheries Network will present a program stressing the importance of quality control in handling the catch as it moves from the boat through the processing and marketing channels to the consumer.

Highliner Awards: National Fisherman will announce the winners of its annual Highliner Awards, which go to three outstanding East Coast fishermen. This year, an additional award will recognize the efforts of an East Coast professor as well.

Insurance Update: Panelists will discuss what is being done to ease the insurance bite, as well as alternatives to obtaining coverage.

The Trouble with Gurry: Professors have yet to permanently solve the problem of how to dispose of New England's gurry. Speakers will discuss the problem and possible solutions.

Display Auction: Can display seafood auctions such as the one in Portland, Maine, help fishermen increase their profits? A fisherman and a buyer will discuss the pros and cons.

Fighting for the Waterfront: A few of the people who have fought to protect the working waterfront from developers will share their strategies.

Friday, October 17 Lobster Gauge: Will the minimum legal size of lobsters be increased, as a Maine law seeks to do, or will the proposal be shot down by other states? Panelists will try to pin down the future of the gauge.

Changes in Fishery Management: Fundamental changes in the way we manage fisheries are necessary, according to many fishermen and managers alike. Speakers will examine the changes that are likely over both short and long terms.

Troubleshooting Diesels: Experts will offer some tips for preventing and repairing some of the diesel engine problems that could mean being towed back to port.

The exhibit hall will be open from 10:00 am to 6:00 pm daily, with the seminars beginning at 10:30 am each day. At the first day's closing on October 15, the Fish Expo Reception will get under way in the Bayside Exposition Center Ballroom, ending at 8:00 pm. Tickets to the two-hour reception are limited and should be ordered in advance, at $20 each.

It is also a good idea for Fish Expo visitors to register for the show in advance, eliminating a wait in line and the $5 registration fee that is charged at the door. For pre-registration forms and reception tickets, contact National Fisherman Expositions at (207) 772-3005.

Bayside Exposition Center should prove advantageous to exhibitors and visitors alike, especially those driving to the show from other parts of New England. The center is just off the Southeast Expressway south of downtown Boston, and has parking facilities for 2,000 cars. For those who will be staying in Boston but not driving to the show, shuttle buses will be making regular daily runs to the Bayside Center from major hotels in the city. 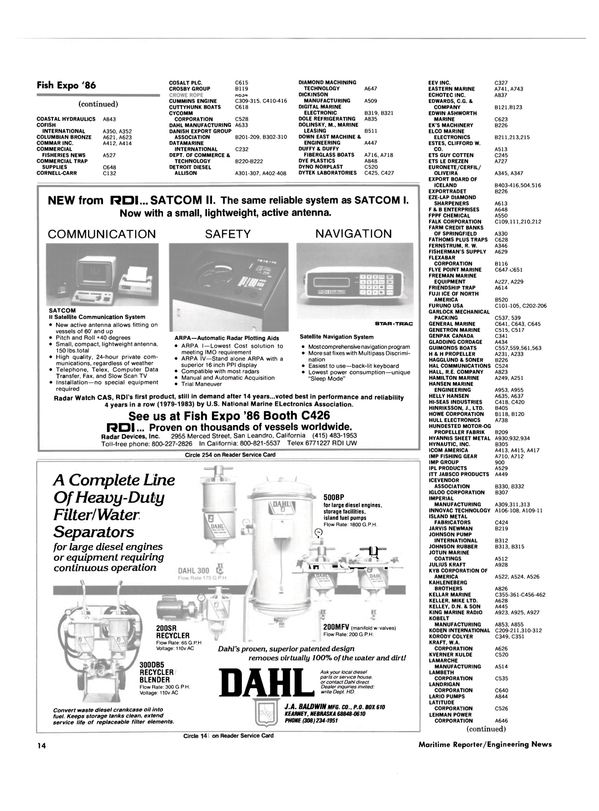 Other stories from October 1986 issue