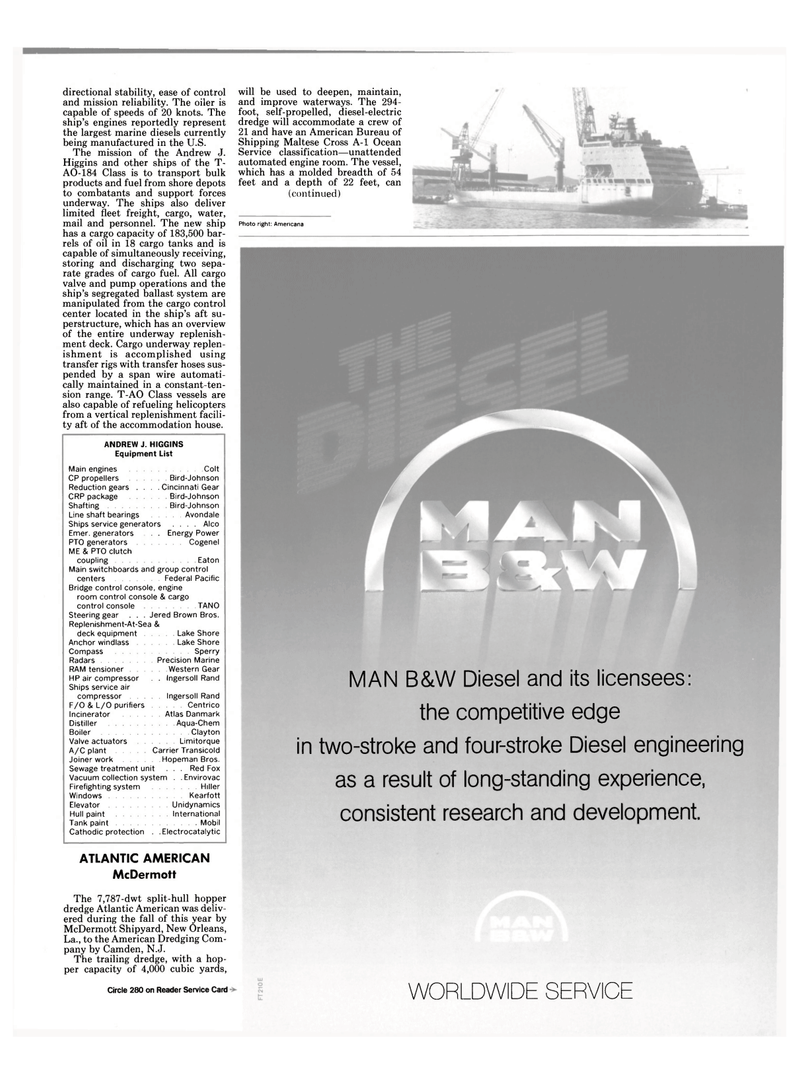 directional stability, ease of control and mission reliability. The oiler is capable of speeds of 20 knots. The ship's engines reportedly represent the largest marine diesels currently being manufactured in the U.S.

The mission of the Andrew J.

Higgins and other ships of the T-

AO-184 Class is to transport bulk products and fuel from shore depots to combatants and support forces underway. The ships also deliver limited fleet freight, cargo, water, mail and personnel. The new ship has a cargo capacity of 183,500 bar- rels of oil in 18 cargo tanks and is capable of simultaneously receiving, storing and discharging two sepa- rate grades of cargo fuel. All cargo valve and pump operations and the ship's segregated ballast system are manipulated from the cargo control center located in the ship's aft su- perstructure, which has an overview of the entire underway replenish- ment deck. Cargo underway replen- ishment is accomplished using transfer rigs with transfer hoses sus- pended by a span wire automati- cally maintained in a constant-ten- sion range. T-AO Class vessels are also capable of refueling helicopters from a vertical replenishment facili- ty aft of the accommodation house.

Cathodic protection . .Electrocatalytic will be used to deepen, maintain, and improve waterways. The 294- foot, self-propelled, diesel-electric dredge will accommodate a crew of 21 and have an American Bureau of

Service classification—unattended automated engine room. The vessel, which has a molded breadth of 54 feet and a depth of 22 feet, can (continued)

MAN B&W Diesel and its licensees: the competitive edge in two-stroke and four-stroke Diesel engineering as a result of long-standing experience, consistent research and development

The 7,787-dwt split-hull hopper dredge Atlantic American was deliv- ered during the fall of this year by

La., to the American Dredging Com- pany by Camden, N.J.

The trailing dredge, with a hop- per capacity of 4,000 cubic yards,