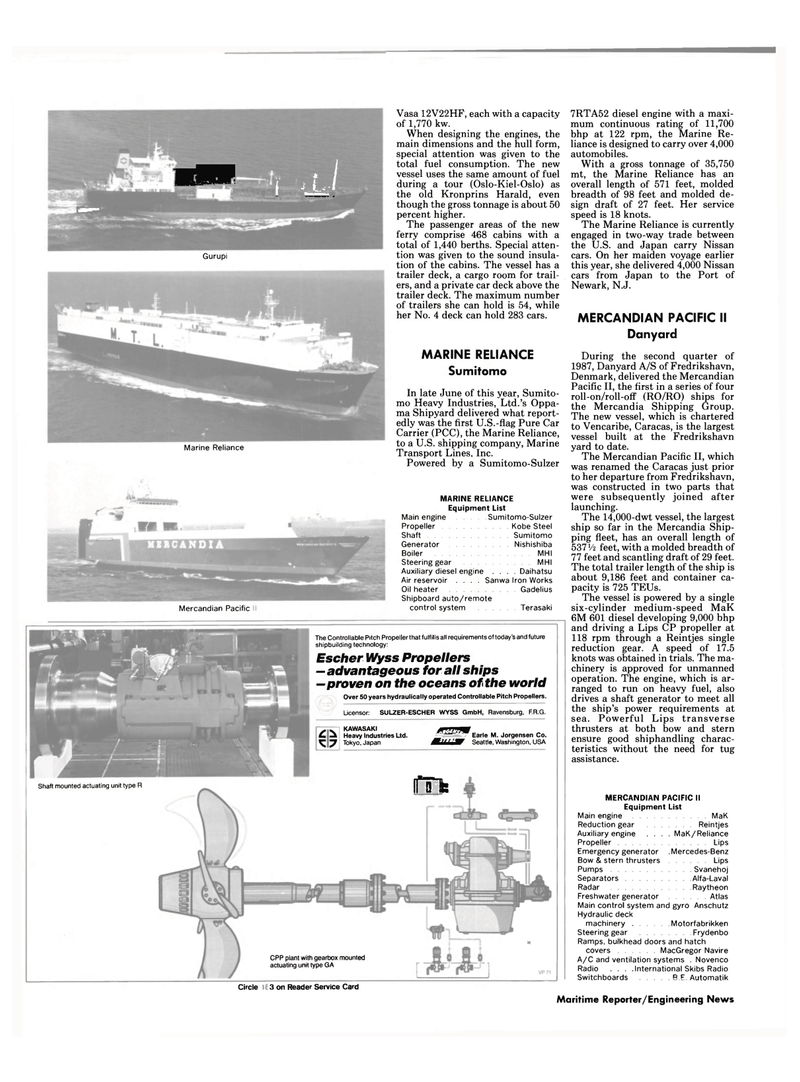 When designing the engines, the main dimensions and the hull form, special attention was given to the total fuel consumption. The new vessel uses the same amount of fuel during a tour (Oslo-Kiel-Oslo) as the old Kronprins Harald, even though the gross tonnage is about 50 percent higher.

The passenger areas of the new ferry comprise 468 cabins with a total of 1,440 berths. Special atten- tion was given to the sound insula- tion of the cabins. The vessel has a trailer deck, a cargo room for trail- ers, and a private car deck above the trailer deck. The maximum number of trailers she can hold is 54, while her No. 4 deck can hold 283 cars.

Shipboard auto/remote control system Terasaki 7RTA52 diesel engine with a maxi- mum continuous rating of 11,700 bhp at 122 rpm, the Marine Re- liance is designed to carry over 4,000 automobiles.

With a gross tonnage of 35,750 mt, the Marine Reliance has an overall length of 571 feet, molded breadth of 98 feet and molded de- sign draft of 27 feet. Her service speed is 18 knots.

The Marine Reliance is currently engaged in two-way trade between the U.S. and Japan carry Nissan cars. On her maiden voyage earlier this year, she delivered 4,000 Nissan cars from Japan to the Port of

Pacific II, the first in a series of four roll-on/roll-off (RO/RO) ships for the Mercandia Shipping Group.

The new vessel, which is chartered to Vencaribe, Caracas, is the largest vessel built at the Fredrikshavn yard to date.

The Mercandian Pacific II, which was renamed the Caracas just prior to her departure from Fredrikshavn, was constructed in two parts that were subsequently joined after launching.

The 14,000-dwt vessel, the largest ship so far in the Mercandia Ship- ping fleet, has an overall length of 537 V'a feet, with a molded breadth of 77 feet and scantling draft of 29 feet.

The total trailer length of the ship is about 9,186 feet and container ca- pacity is 725 TEUs.

The vessel is powered by a single six-cylinder medium-speed MaK 6M 601 diesel developing 9,000 bhp and driving a Lips CP propeller at 118 rpm through a Reintjes single reduction gear. A speed of 17.5 knots was obtained in trials. The ma- chinery is approved for unmanned operation. The engine, which is ar- ranged to run on heavy fuel, also drives a shaft generator to meet all the ship's power requirements at sea. Powerful Lips transverse thrusters at both bow and stern ensure good shiphandling charac- teristics without the need for tug assistance.

The Controllable Pitch Propeller that fulfills all requirements of today's and future shipbuilding technology: