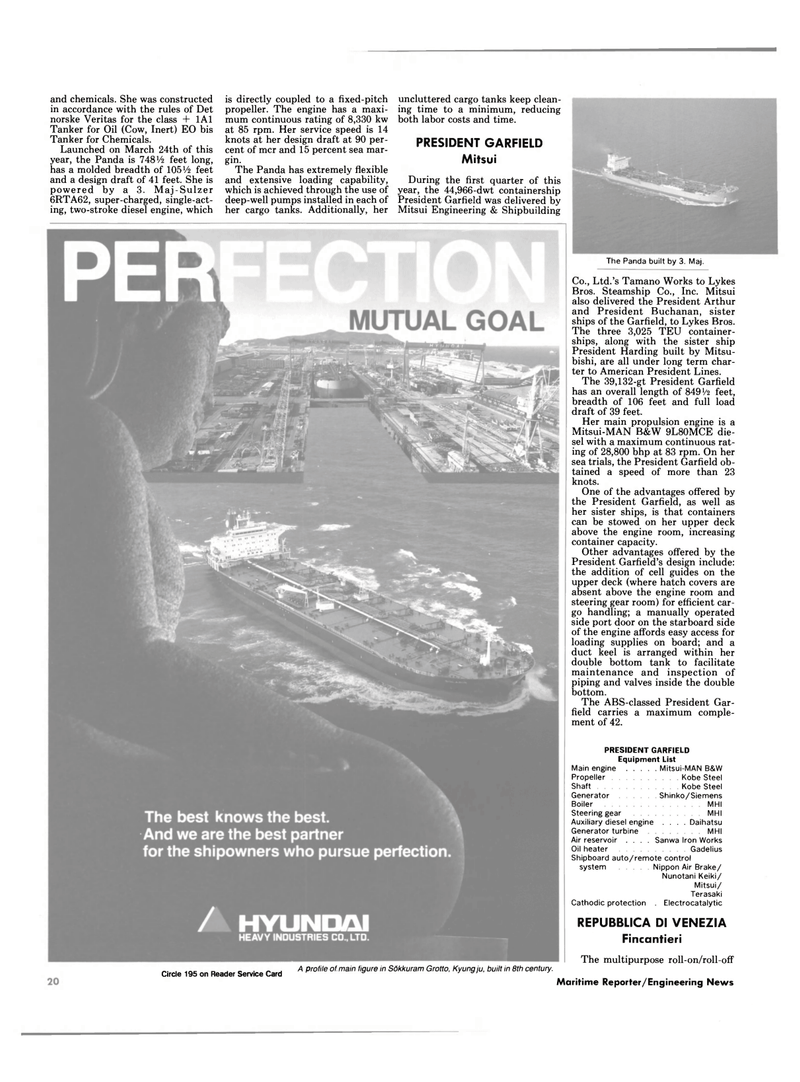 and chemicals. She was constructed in accordance with the rules of Det norske Veritas for the class + 1A1

Launched on March 24th of this year, the Panda is 748 V2 feet long, has a molded breadth of 105 V2 feet and a design draft of 41 feet. She is powered by a 3. Maj-Sulzer 6RTA62, super-charged, single-act- ing, two-stroke diesel engine, which is directly coupled to a fixed-pitch propeller. The engine has a maxi- mum continuous rating of 8,330 kw at 85 rpm. Her service speed is 14 knots at her design draft at 90 per- cent of mcr and 15 percent sea mar- gin.

The Panda has extremely flexible and extensive loading capability, which is achieved through the use of deep-well pumps installed in each of her cargo tanks. Additionally, her uncluttered cargo tanks keep clean- ing time to a minimum, reducing both labor costs and time.

During the first quarter of this year, the 44,966-dwt containership

President Garfield was delivered by

The three 3,025 TEU container- ships, along with the sister ship

Her main propulsion engine is a

One of the advantages offered by the President Garfield, as well as her sister ships, is that containers can be stowed on her upper deck above the engine room, increasing container capacity.

Other advantages offered by the

President Garfield's design include: the addition of cell guides on the upper deck (where hatch covers are absent above the engine room and steering gear room) for efficient car- go handling; a manually operated side port door on the starboard side of the engine affords easy access for loading supplies on board; and a duct keel is arranged within her double bottom tank to facilitate maintenance and inspection of piping and valves inside the double bottom.