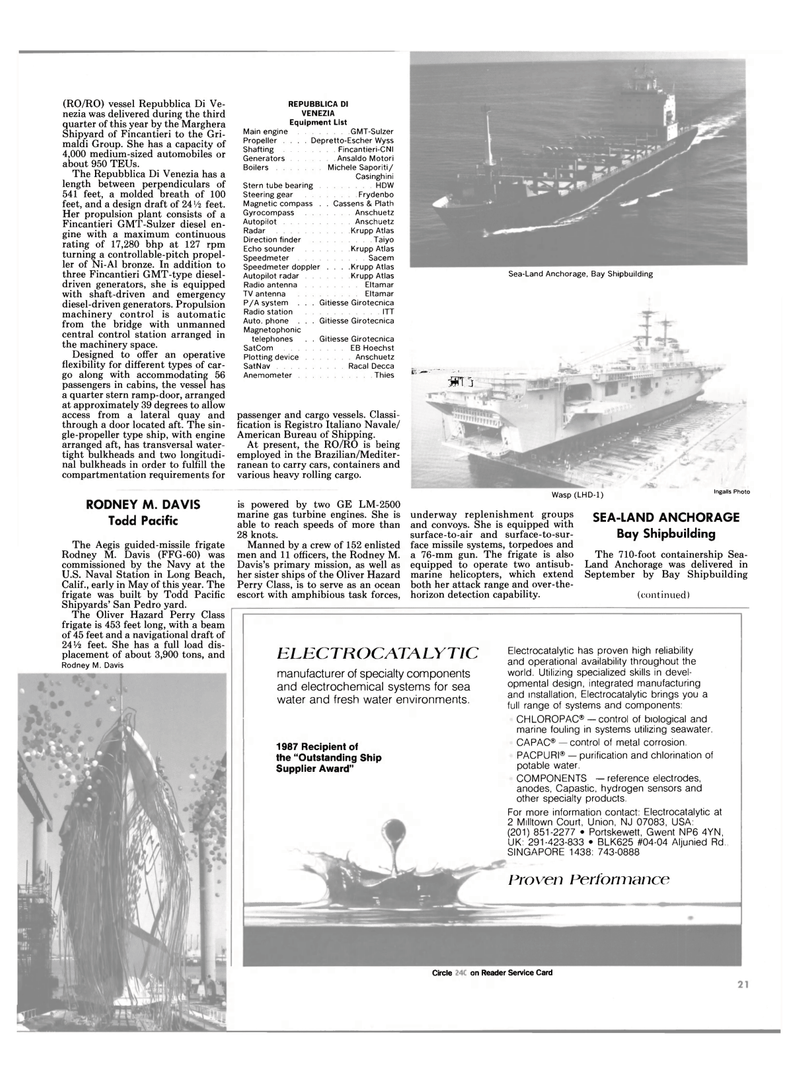 Shipyard of Fincantieri to the Gri- maldi Group. She has a capacity of 4,000 medium-sized automobiles or about 950 TEUs.

The Repubblica Di Venezia has a length between perpendiculars of 541 feet, a molded breath of 100 feet, and a design draft of 24 'A feet.

Her propulsion plant consists of a

Fincantieri GMT-Sulzer diesel en- gine with a maximum continuous rating of 17,280 bhp at 127 rpm turning a controllable-pitch propel- ler of Ni-Al bronze. In addition to three Fincantieri GMT-type diesel- driven generators, she is equipped with shaft-driven and emergency diesel-driven generators. Propulsion machinery control is automatic from the bridge with unmanned central control station arranged in the machinery space.

Designed to offer an operative flexibility for different types of car- go along with accommodating 56 passengers in cabins, the vessel has a quarter stern ramp-door, arranged at approximately 39 degrees to allow access from a lateral quay and through a door located aft. The sin- gle-propeller type ship, with engine arranged aft, has transversal water- tight bulkheads and two longitudi- nal bulkheads in order to fulfill the compartmentation requirements for

Rodney M. Davis (FFG-60) was commissioned by the Navy at the

Calif., early in May of this year. The frigate was built by Todd Pacific

The Oliver Hazard Perry Class frigate is 453 feet long, with a beam of 45 feet and a navigational draft of 24!/2 feet. She has a full load dis- placement of about 3,900 tons, and

At present, the RO/RO is being employed in the Brazilian/Mediter- ranean to carry cars, containers and various heavy rolling cargo. is powered by two GE LM-2500 marine gas turbine engines. She is able to reach speeds of more than 28 knots.

Manned by a crew of 152 enlisted men and 11 officers, the Rodney M.

Davis's primary mission, as well as her sister ships of the Oliver Hazard

Perry Class, is to serve as an ocean escort with amphibious task forces,

Wasp (LHD-1) Ingalls Photo underway replenishment groups and convoys. She is equipped with surface-to-air and surface-to-sur- face missile systems, torpedoes and a 76-mm gun. The frigate is also equipped to operate two antisub- marine helicopters, which extend both her attack range and over-the- horizon detection capability.

Land Anchorage was delivered in

Electrocatalytic has proven high reliability and operational availability throughout the world. Utilizing specialized skills in devel- opmental design, integrated manufacturing and installation, Electrocatalytic brings you a full range of systems and components: