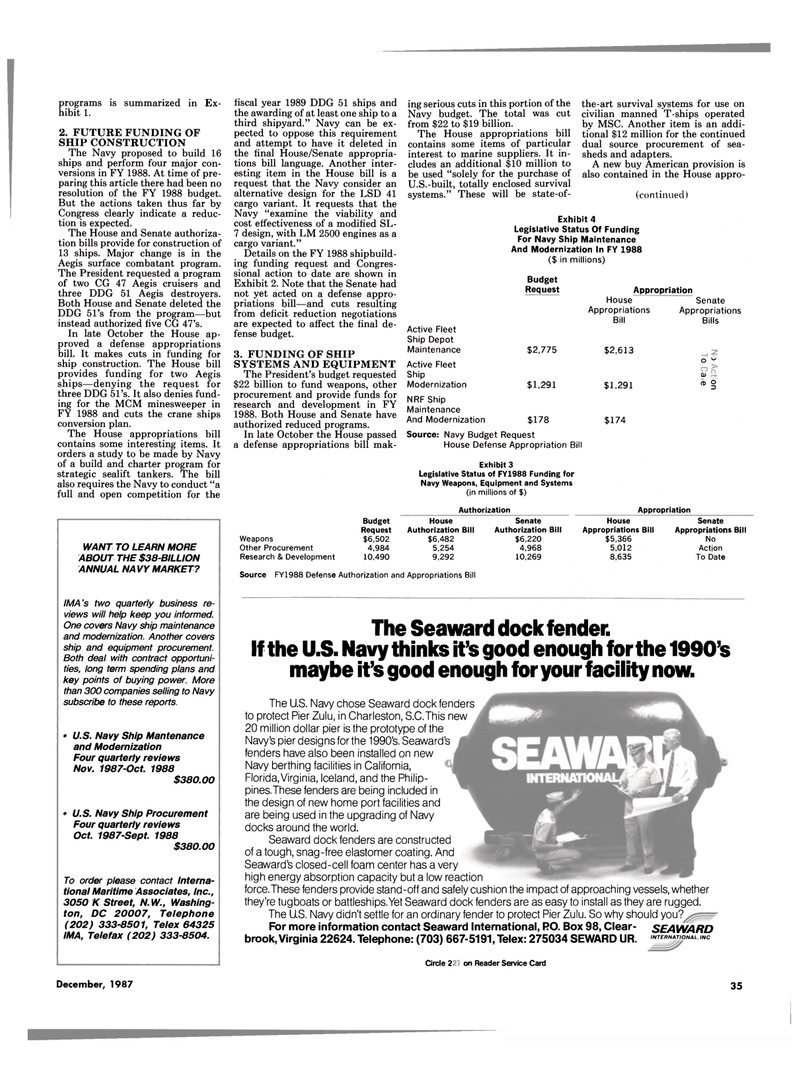 programs is summarized in Ex- hibit 1. 2. FUTURE FUNDING OF

The Navy proposed to build 16 ships and perform four major con- versions in FY 1988. At time of pre- paring this article there had been no resolution of the FY 1988 budget.

But the actions taken thus far by

The House and Senate authoriza- tion bills provide for construction of 13 ships. Major change is in the

Both House and Senate deleted the

DDG 51's from the program—but instead authorized five CG 47's.

In late October the House ap- proved a defense appropriations bill. It makes cuts in funding for ship construction. The House bill provides funding for two Aegis ships—denying the request for three DDG 51's. It also denies fund- ing for the MCM minesweeper in

The House appropriations bill contains some interesting items. It orders a study to be made by Navy of a build and charter program for strategic sealift tankers. The bill also requires the Navy to conduct "a full and open competition for the

One covers Navy ship maintenance and modernization. Another covers ship and equipment procurement.

IMA, Telefax (202) 333-8504. fiscal year 1989 DDG 51 ships and the awarding of at least one ship to a third shipyard." Navy can be ex- pected to oppose this requirement and attempt to have it deleted in the final House/Senate appropria- tions bill language. Another inter- esting item in the House bill is a request that the Navy consider an alternative design for the LSD 41 cargo variant. It requests that the

Navy "examine the viability and cost effectiveness of a modified SL- 7 design, with LM 2500 engines as a cargo variant."

Exhibit 2. Note that the Senate had not yet acted on a defense appro- priations bill—and cuts resulting from deficit reduction negotiations are expected to affect the final de- fense budget. 3. FUNDING OF SHIP

The President's budget requested $22 billion to fund weapons, other procurement and provide funds for research and development in FY 1988. Both House and Senate have authorized reduced programs.

The House appropriations bill contains some items of particular interest to marine suppliers. It in- cludes an additional $10 million to be used "solely for the purchase of

U.S.-built, totally enclosed survival systems." These will be state-of- the-art survival systems for use on civilian manned T-ships operated by MSC. Another item is an addi- tional $12 million for the continued dual source procurement of sea- sheds and adapters.

Legislative Status of FY1988 Funding for

Navy Weapons, Equipment and Systems (in millions of $)

The U.S. Navy chose Seaward dock fenders to protect Pier Zulu, in Charleston, S.C.This new 20 million dollar pier is the prototype of the

Navy's pier designs for the 1990's. Seaward's fenders have also been installed on new

Florida, Virginia, Iceland, and the Philip- pines. These fenders are being included in the design of new home port facilities and are being used in the upgrading of Navy docks around the world.

Seaward dock fenders are constructed of a tough, snag-free elastomer coating. And

Seaward's closed-cell foam center has a very high energy absorption capacity but a low reaction force.These fenders provide stand-off and safely cushion the impact of approaching vessels, whether they're tugboats or battleships. Yet Seaward dock fenders are as easy to install as they are rugged.

The U.S. Navy didn't settle for an ordinary fender to protect Pier Zulu. So why should you?