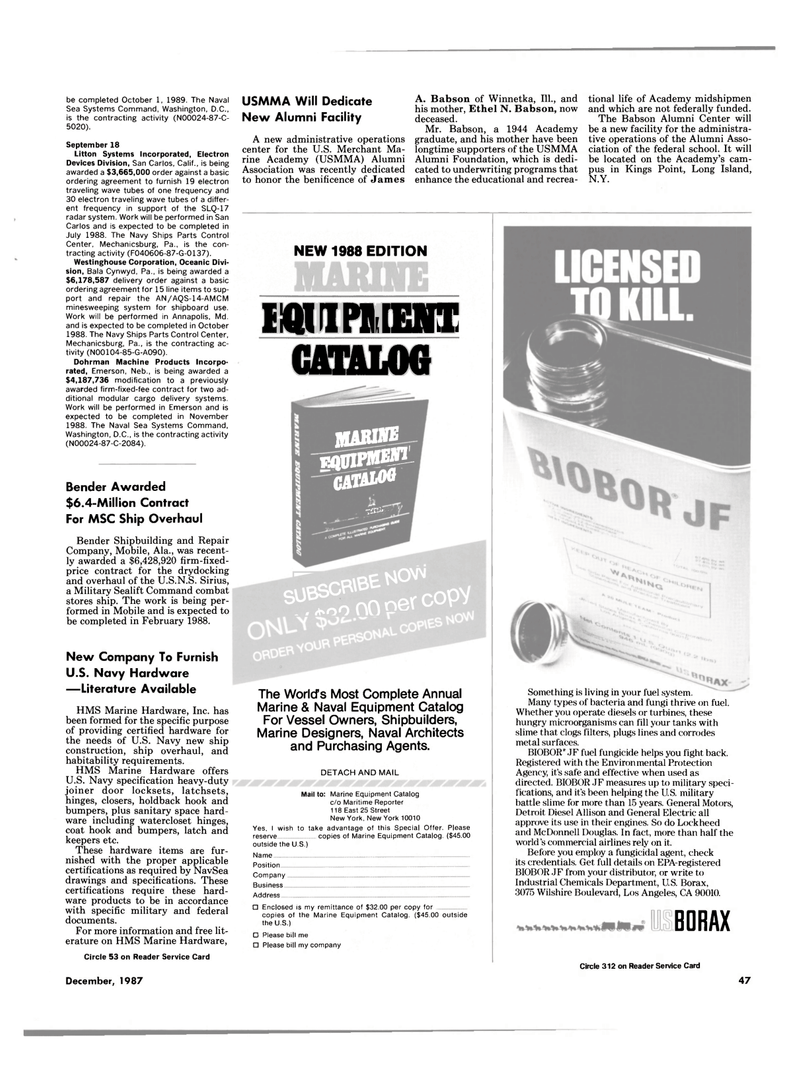 Carlos and is expected to be completed in

Westinghouse Corporation, Oceanic Divi- sion, Bala Cynwyd, Pa., is being awarded a $6,178,587 delivery order against a basic ordering agreement for 15 line items to sup- port and repair the AN/AQS-14-AMCM minesweeping system for shipboard use.

Work will be performed in Annapolis, Md. and is expected to be completed in October 1988. The Navy Ships Parts Control Center,

Work will be performed in Emerson and is expected to be completed in November 1988. The Naval Sea Systems Command,

Association was recently dedicated to honor the benificence of James

Mr. Babson, a 1944 Academy graduate, and his mother have been longtime supporters of the USMMA

Alumni Foundation, which is dedi- cated to underwriting programs that enhance the educational and recrea- tional life of Academy midshipmen and which are not federally funded.

The Babson Alumni Center will be a new facility for the administra- tive operations of the Alumni Asso- ciation of the federal school. It will be located on the Academy's cam- pus in Kings Point, Long Island,

Company, Mobile, Ala., was recent- ly awarded a $6,428,920 firm-fixed- price contract for the drydocking and overhaul of the U.S.N.S. Sirius, a Military Sealift Command combat stores ship. The work is being per- formed in Mobile and is expected to be completed in February 1988.

HMS Marine Hardware, Inc. has been formed for the specific purpose of providing certified hardware for the needs of U.S. Navy new ship construction, ship overhaul, and habitability requirements.

These hardware items are fur- nished with the proper applicable certifications as required by NavSea drawings and specifications. These certifications require these hard- ware products to be in accordance with specific military and federal documents.

The Worlds Most Complete Annual

Yes, I wish to take advantage of this Special Offer. Please reserve copies of Marine Equipment Catalog. ($45.00 outside the U.S.)

Something is living in your fuel system.

Many types of bacteria and fungi thrive on fuel.

Whether you operate diesels or turbines, these hungry microorganisms can fill your tanks with slime that clogs filters, plugs lines and corrodes metal surfaces.

Registered with the Environmental Protection

Agency, it's safe and effective when used as directed. BIOBOR JF measures up to military speci- fications, and it's been helping the U.S. military battle slime for more than 15 years. General Motors,

Detroit Diesel Allison and General Electric all approve its use in their engines. So do Lockheed and McDonnell Douglas. In fact, more than half the world's commercial airlines rely on it.

Before you employ a fungicidal agent, check its credentials. Get full details on EPA-registered

BIOBOR JF from your distributor, or write to