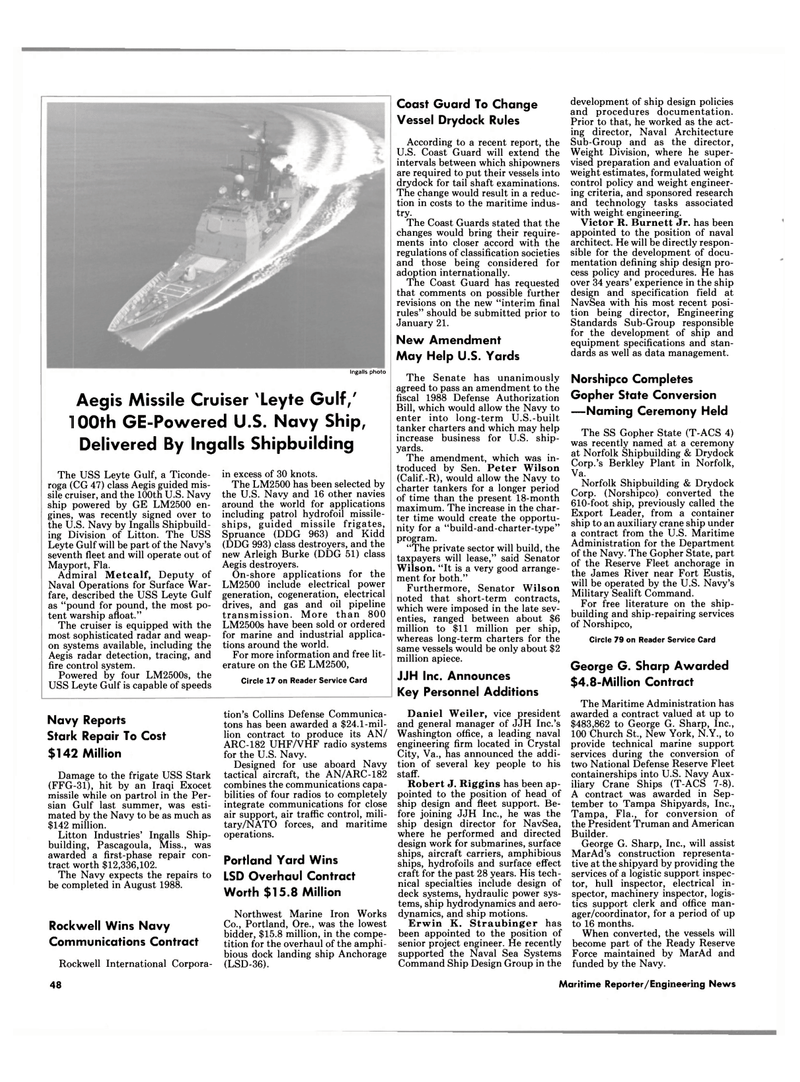 The cruiser is equipped with the most sophisticated radar and weap- on systems available, including the

USS Leyte Gulf is capable of speeds in excess of 30 knots.

The LM2500 has been selected by the U.S. Navy and 16 other navies around the world for applications including patrol hydrofoil missile- ships, guided missile frigates,

On-shore applications for the

LM2500s have been sold or ordered for marine and industrial applica- tions around the world.

For more information and free lit- erature on the GE LM2500,

According to a recent report, the

U.S. Coast Guard will extend the intervals between which shipowners are required to put their vessels into drydock for tail shaft examinations.

The change would result in a reduc- tion in costs to the maritime indus- try.

The Coast Guards stated that the changes would bring their require- ments into closer accord with the regulations of classification societies and those being considered for adoption internationally.

Prior to that, he worked as the act- ing director, Naval Architecture

Sub-Group and as the director,

Victor R. Burnett Jr. has been appointed to the position of naval architect. He will be directly respon- sible for the development of docu- mentation defining ship design pro- cess policy and procedures. He has over 34 years' experience in the ship design and specification field at

NavSea with his most recent posi- tion being director, Engineering

Standards Sub-Group responsible for the development of ship and equipment specifications and stan- dards as well as data management.

Damage to the frigate USS Stark (FFG-31), hit by an Iraqi Exocet missile while on partrol in the Per- sian Gulf last summer, was esti- mated by the Navy to be as much as $142 million.

The Navy expects the repairs to be completed in August 1988.

Rockwell International Corpora- tion's Collins Defense Communica- tons has been awarded a $24.1-mil- lion contract to produce its AN/

Co., Portland, Ore., was the lowest bidder, $15.8 million, in the compe- tition for the overhaul of the amphi- bious dock landing ship Anchorage (LSD-36).

Bill, which would allow the Navy to enter into long-term U.S.-built tanker charters and which may help increase business for U.S. ship- yards.

The amendment, which was in- troduced by Sen. Peter Wilson (Calif.-R), would allow the Navy to charter tankers for a longer period of time than the present 18-month maximum. The increase in the char- ter time would create the opportu- nity for a "build-and-charter-type" program. "The private sector will build, the taxpayers will lease," said Senator

Wilson. "It is a very good arrange- ment for both."

Furthermore, Senator Wilson noted that short-term contracts, which were imposed in the late sev- enties, ranged between about $6 million to $11 million per ship, whereas long-term charters for the same vessels would be only about $2 million apiece.

City, Va., has announced the addi- tion of several key people to his staff.

Robert J. Riggins has been ap- pointed to the position of head of ship design and fleet support. Be- fore joining JJH Inc., he was the ship design director for NavSea, where he performed and directed design work for submarines, surface ships, aircraft carriers, amphibious ships, hydrofoils and surface effect craft for the past 28 years. His tech- nical specialties include design of deck systems, hydraulic power sys- tems, ship hydrodynamics and aero- dynamics, and ship motions.

Erwin K. Straubinger has been appointed to the position of senior project engineer. He recently supported the Naval Sea Systems

Command Ship Design Group in the

Export Leader, from a container ship to an auxiliary crane ship under a contract from the U.S. Maritime

Administration for the Department of the Navy. The Gopher State, part of the Reserve Fleet anchorage in the James River near Fort Eustis, will be operated by the U.S. Navy's

For free literature on the ship- building and ship-repairing services of Norshipco,

A contract was awarded in Sep- tember to Tampa Shipyards, Inc.,

Tampa, Fla., for conversion of the President Truman and American

Mar Ad's construction representa- tive at the shipyard by providing the services of a logistic support inspec- tor, hull inspector, electrical in- spector, machinery inspector, logis- tics support clerk and office man- ager/coordinator, for a period of up to 16 months.

When converted, the vessels will become part of the Ready Reserve

Force maintained by MarAd and funded by the Navy. 48 Maritime Reporter/Engineering News