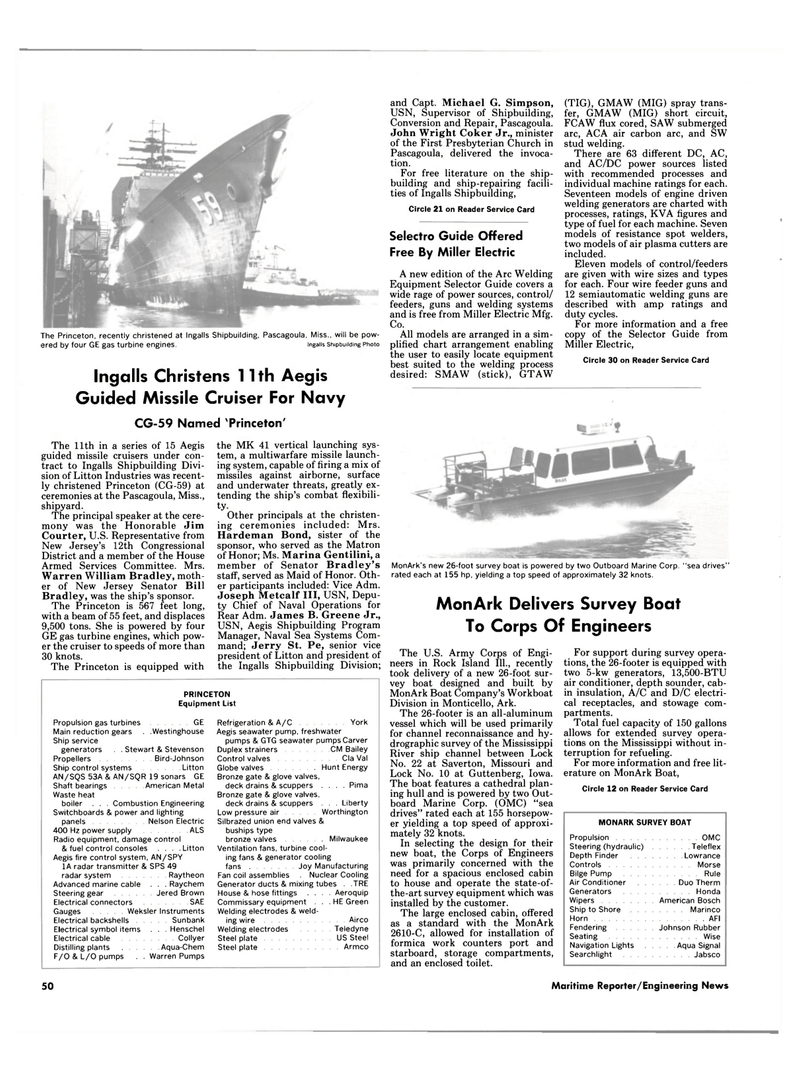 Pascagoula, Miss., will be pow-

The 11th in a series of 15 Aegis guided missile cruisers under con- tract to Ingalls Shipbuilding Divi- sion of Litton Industries was recent- ly christened Princeton (CG-59) at ceremonies at the Pascagoula, Miss., shipyard.

The principal speaker at the cere- mony was the Honorable Jim

District and a member of the House

Bradley, was the ship's sponsor.

GE gas turbine engines, which pow- er the cruiser to speeds of more than 30 knots.

The Princeton is equipped with

For free literature on the ship- building and ship-repairing facili- ties of Ingalls Shipbuilding,

A new edition of the Arc Welding

There are 63 different DC, AC, and AC/DC power sources listed with recommended processes and individual machine ratings for each.

Eleven models of control/feeders are given with wire sizes and types for each. Four wire feeder guns and 12 semiautomatic welding guns are described with amp ratings and duty cycles.

Other principals at the christen- ing ceremonies included: Mrs.

Hardeman Bond, sister of the sponsor, who served as the Matron of Honor; Ms. Marina Gentilini, a member of Senator Bradley's staff, served as Maid of Honor. Oth- er participants included: Vice Adm.

To Corps Of Engineers

No. 22 at Saverton, Missouri and

The boat features a cathedral plan- ing hull and is powered by two Out- board Marine Corp. (OMC) "sea drives" rated each at 155 horsepow- er yielding a top speed of approxi- mately 32 knots.

In selecting the design for their new boat, the Corps of Engineers was primarily concerned with the need for a spacious enclosed cabin to house and operate the state-of- the-art survey equipment which was installed by the customer.

The large enclosed cabin, offered as a standard with the MonArk 2610-C, allowed for installation of formica work counters port and starboard, storage compartments, and an enclosed toilet.

Total fuel capacity of 150 gallons allows for extended survey opera- tions on the Mississippi without in- terruption for refueling.

For more information and free lit- erature on MonArk Boat,