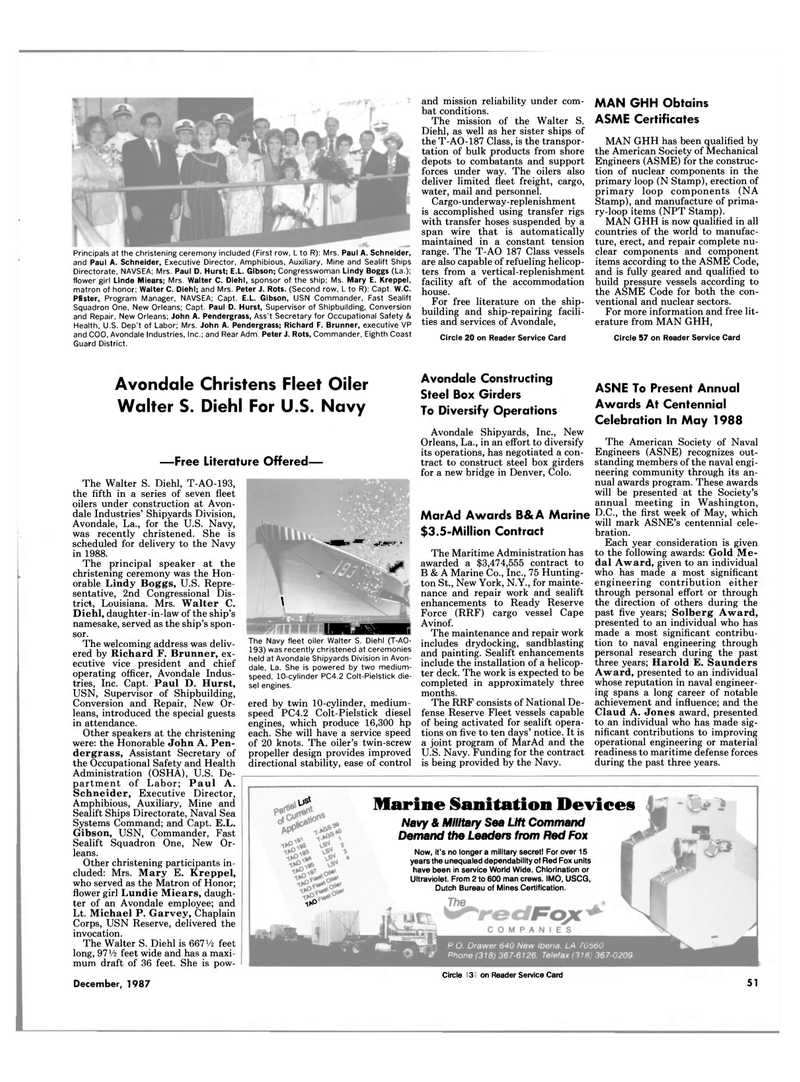 The mission of the Walter S.

Diehl, as well as her sister ships of the T-AO-187 Class, is the transpor- tation of bulk products from sbore depots to combatants and support forces under way. The oilers also deliver limited fleet freight, cargo, water, mail and personnel.

Cargo-underway-replenishment is accomplished using transfer rigs with transfer hoses suspended by a span wire that is automatically maintained in a constant tension range. The T-AO 187 Class vessels are also capable of refueling helicop- ters from a vertical-replenishment facility aft of the accommodation house.

For free literature on the ship- building and ship-repairing facili- ties and services of Avondale,

MAN GHH has been qualified by the American Society of Mechanical

For more information and free lit- erature from MAN GHH,

The Walter S. Diehl, T-AO-193, the fifth in a series of seven fleet oilers under construction at Avon- dale Industries' Shipyards Division,

Avondale, La., for the U.S. Navy, was recently christened. She is scheduled for delivery to the Navy in 1988.

Diehl, daughter-in-law of the ship's namesake, served as the ship's spon- sor.

Conversion and Repair, New Or- leans, introduced the special guests in attendance.

Other speakers at the christening were: the Honorable John A. Pen- dergrass, Assistant Secretary of the Occupational Safety and Health

Amphibious, Auxiliary, Mine and

Sealift Squadron One, New Or- leans.

Other christening participants in- cluded: Mrs. Mary E. Kreppel, who served as the Matron of Honor; flower girl Lundie Miears, daugh- ter of an Avondale employee; and

Orleans, La., in an effort to diversify its operations, has negotiated a con- tract to construct steel box girders for a new bridge in Denver, Colo.

The Maritime Administration has awarded a $3,474,555 contract to

The maintenance and repair work includes drydocking, sandblasting and painting. Sealift enhancements include the installation of a helicop- ter deck. The work is expected to be completed in approximately three months.

The RRF consists of National De- fense Reserve Fleet vessels capable of being activated for sealift opera- tions on five to ten days' notice. It is a joint program of MarAd and the

U.S. Navy. Funding for the contract is being provided by the Navy.

The American Society of Naval

Engineers (ASNE) recognizes out- standing members of the naval engi- neering community through its an- nual awards program. These awards will be presented at the Society's annual meeting in Washington,

D.C., the first week of May, which will mark ASNE's centennial cele- bration.

Award, presented to an individual whose reputation in naval engineer- ing spans a long career of notable achievement and influence; and the

Claud A. Jones award, presented to an individual who has made sig- nificant contributions to improving operational engineering or material readiness to maritime defense forces during the past three years. yst

Demand the Leaders from Red Fox

Now, it's no longer a military secret! For over 15 years the unequaled dependability of Red Fox units have been in service World Wide. Chlorination or