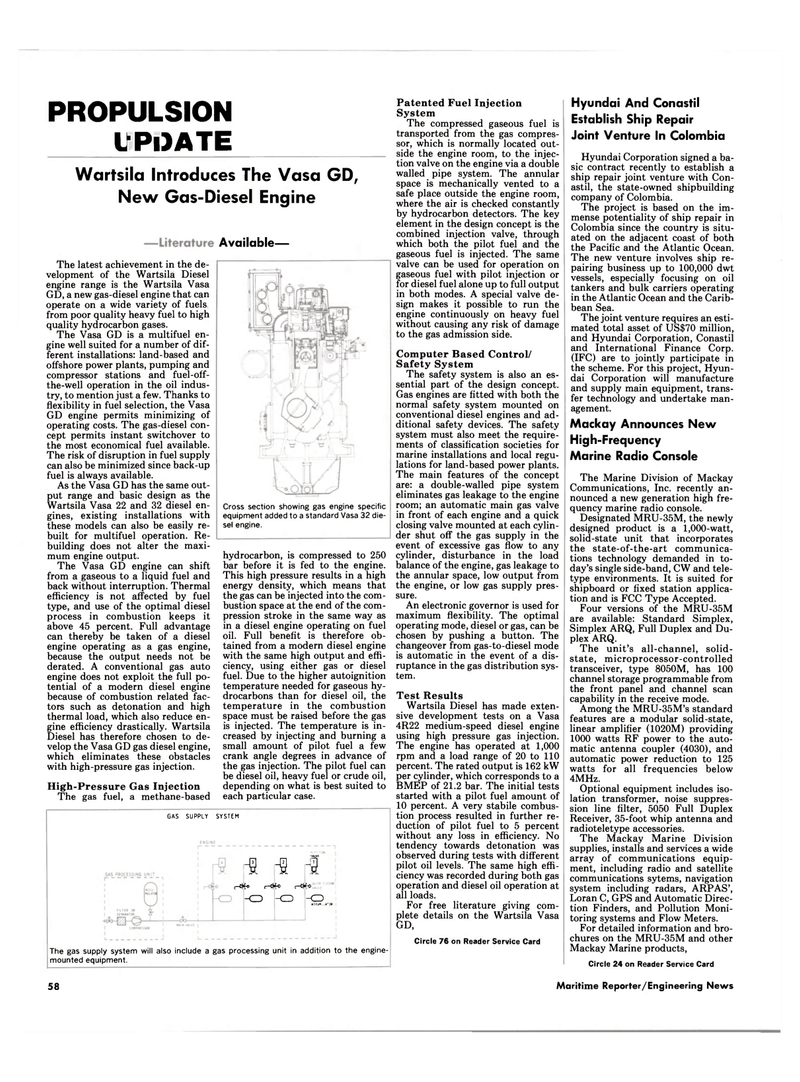 GD, a new gas-diesel engine that can operate on a wide variety of fuels, from poor quality heavy fuel to high quality hydrocarbon gases.

The Vasa GD is a multifuel en- gine well suited for a number of dif- ferent installations: land-based and offshore power plants, pumping and compressor stations and fuel-off- the-well operation in the oil indus- try, to mention just a few. Thanks to flexibility in fuel selection, the Vasa

The risk of disruption in fuel supply can also be minimized since back-up fuel is always available.

Wartsila Vasa 22 and 32 diesel en- gines, existing installations with these models can also be easily re- built for multifuel operation. Re- building does not alter the maxi- mum engine output.

The Vasa GD engine can shift from a gaseous to a liquid fuel and back without interruption. Thermal efficiency is not affected by fuel type, and use of the optimal diesel process in combustion keeps it above 45 percent. Full advantage can thereby be taken of a diesel engine operating as a gas engine, because the output needs not be derated. A conventional gas auto engine does not exploit the full po- tential of a modern diesel engine because of combustion related fac- tors such as detonation and high thermal load, which also reduce en- gine efficiency drastically. Wartsila

The gas fuel, a methane-based hydrocarbon, is compressed to 250 bar before it is fed to the engine.

This high pressure results in a high energy density, which means that the gas can be injected into the com- bustion space at the end of the com- pression stroke in the same way as in a diesel engine operating on fuel oil. Full benefit is therefore ob- tained from a modern diesel engine with the same high output and effi- ciency, using either gas or diesel fuel. Due to the higher autoignition temperature needed for gaseous hy- drocarbons than for diesel oil, the temperature in the combustion space must be raised before the gas is injected. The temperature is in- creased by injecting and burning a small amount of pilot fuel a few crank angle degrees in advance of the gas injection. The pilot fuel can be diesel oil, heavy fuel or crude oil, depending on what is best suited to each particular case.

The compressed gaseous fuel is transported from the gas compres- sor, which is normally located out- side the engine room, to the injec- tion valve on the engine via a double walled pipe system. The annular space is mechanically vented to a safe place outside the engine room, where the air is checked constantly by hydrocarbon detectors. The key element in the design concept is the combined injection valve, through which both the pilot fuel and the gaseous fuel is injected. The same valve can be used for operation on gaseous fuel with pilot injection or for diesel fuel alone up to full output in both modes. A special valve de- sign makes it possible to run the engine continuously on heavy fuel without causing any risk of damage to the gas admission side.

The safety system is also an es- sential part of the design concept.

Gas engines are fitted with both the normal safety system mounted on conventional diesel engines and ad- ditional safety devices. The safety system must also meet the require- ments of classification societies for marine installations and local regu- lations for land-based power plants.

The main features of the concept are: a double-walled pipe system eliminates gas leakage to the engine room; an automatic main gas valve in front of each engine and a quick closing valve mounted at each cylin- der shut off the gas supply in the event of excessive gas flow to any cylinder, disturbance in the load balance of the engine, gas leakage to the annular space, low output from the engine, or low gas supply pres- sure.

An electronic governor is used for maximum flexibility. The optimal operating mode, diesel or gas, can be chosen by pushing a button. The changeover from gas-to-diesel mode is automatic in the event of a dis- ruptance in the gas distribution sys- tem.

BMEP of 21.2 bar. The initial tests started with a pilot fuel amount of 10 percent. A very stabile combus- tion process resulted in further re- duction of pilot fuel to 5 percent without any loss in efficiency. No tendency towards detonation was observed during tests with different pilot oil levels. The same high effi- ciency was recorded during both gas operation and diesel oil operation at all loads.

Colombia since the country is situ- ated on the adjacent coast of both the Pacific and the Atlantic Ocean.

The new venture involves ship re- pairing business up to 100,000 dwt vessels, especially focusing on oil tankers and bulk carriers operating in the Atlantic Ocean and the Carib- bean Sea.

The joint venture requires an esti- mated total asset of US$70 million, and Hyundai Corporation, Conastil and International Finance Corp. (IFC) are to jointly participate in the scheme. For this project, Hyun- dai Corporation will manufacture and supply main equipment, trans- fer technology and undertake man- agement.

The Marine Division of Mackay

Designated MRU-35M, the newly designed product is a 1,000-watt, solid-state unit that incorporates the state-of-the-art communica- tions technology demanded in to- day's single side-band, CW and tele- type environments. It is suited for shipboard or fixed station applica- tion and is FCC Type Accepted.

Four versions of the MRU-35M are available: Standard Simplex,

Among the MRU-35M's standard features are a modular solid-state, linear amplifier (1020M) providing 1000 watts RF power to the auto- matic antenna coupler (4030), and automatic power reduction to 125 watts for all frequencies below 4MHz.

The gas supply system will also include a gas processing unit in addition to the engine- mounted equipment. 58 Maritime Reporter/Engineering News