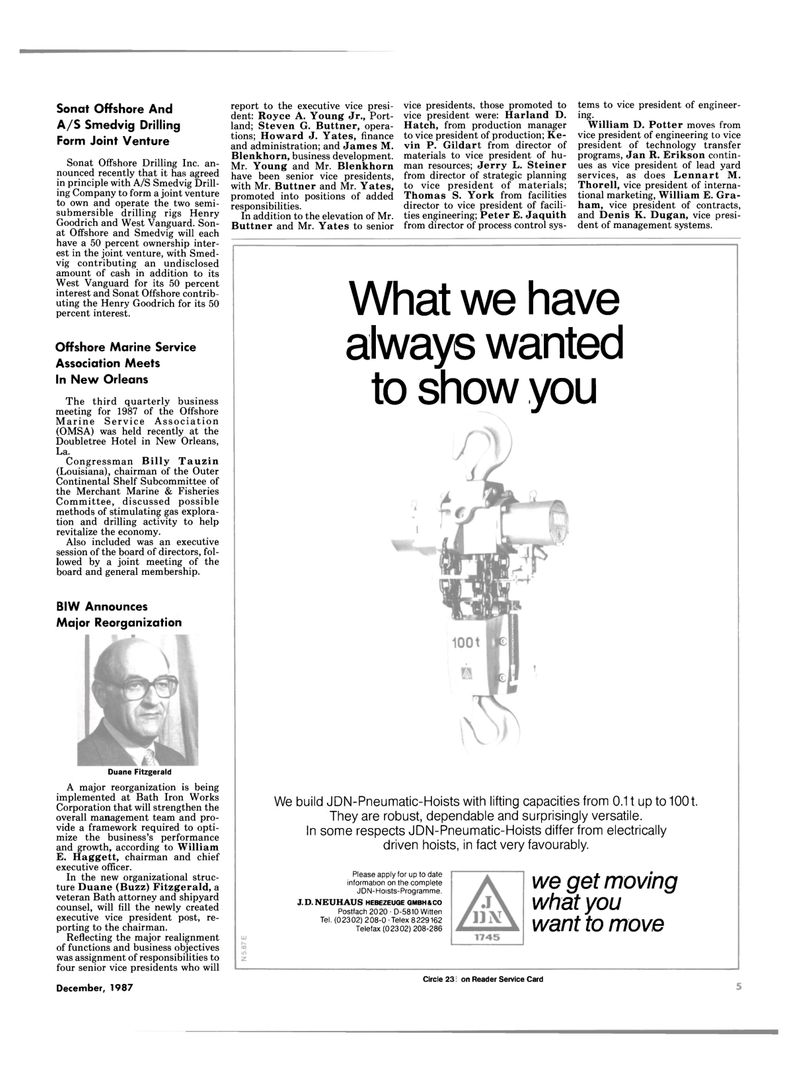 Sonat Offshore Drilling Inc. an- nounced recently that it has agreed in principle with A/S Smedvig Drill- ing Company to form a joint venture to own and operate the two semi- submersible drilling rigs Henry

Goodrich and West Vanguard. Son- at Offshore and Smedvig will each have a 50 percent ownership inter- est in the joint venture, with Smed- vig contributing an undisclosed amount of cash in addition to its

The third quarterly business meeting for 1987 of the Offshore

Marine Service Association (OMSA) was held recently at the

Also included was an executive session of the board of directors, fol- lowed by a joint meeting of the board and general membership.

A major reorganization is being implemented at Bath Iron Works

Corporation that will strengthen the overall management team and pro- vide a framework required to opti- mize the business's performance and growth, according to William

In the new organizational struc- ture Duane (Buzz) Fitzgerald, a veteran Bath attorney and shipyard counsel, will fill the newly created executive vice president post, re- porting to the chairman.

Mr. Young and Mr. Blenkhorn have been senior vice presidents, with Mr. Buttner and Mr. Yates, promoted into positions of added responsibilities.

In addition to the elevation of Mr.

What we have always wanted to show you

We build JDN-Pneumatic-Hoists with lifting capacities from 0.11 up to 1001.

They are robust, dependable and surprisingly versatile.

In some respects JDN-Pneumatic-Hoists differ from electrically driven hoists, in fact very favourably.

Please apply for up to date information on the complete