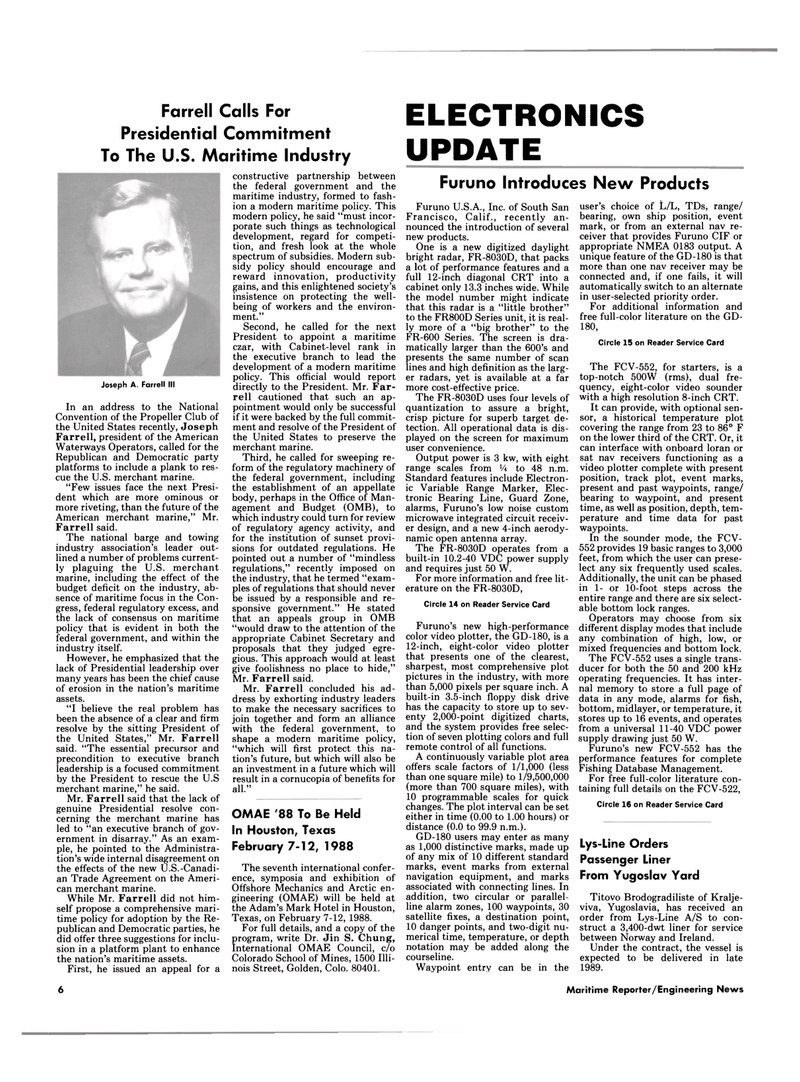 To The U.S. Maritime Industry

In an address to the National

Convention of the Propeller Club of the United States recently, Joseph

Farrell, president of the American

Waterways Operators, called for the

Republican and Democratic party platforms to include a plank to res- cue the U.S. merchant marine. "Few issues face the next Presi- dent which are more ominous or more riveting, than the future of the

The national barge and towing industry association's leader out- lined a number of problems current- ly plaguing the U.S. merchant marine, including the effect of the budget deficit on the industry, ab- sence of maritime focus in the Con- gress, federal regulatory excess, and the lack of consensus on maritime policy that is evident in both the federal government, and within the industry itself.

However, he emphasized that the lack of Presidential leadership over many years has been the chief cause of erosion in the nation's maritime assets. "I believe the real problem has been the absence of a clear and firm resolve by the sitting President of the United States," Mr. Farrell said. "The essential precursor and precondition to executive branch leadership is a focused commitment by the President to rescue the U.S merchant marine," he said.

Mr. Farrell said that the lack of genuine Presidential resolve con- cerning the merchant marine has led to "an executive branch of gov- ernment in disarray." As an exam- ple, he pointed to the Administra- tion's wide internal disagreement on the effects of the new U.S.-Canadi- an Trade Agreement on the Ameri- can merchant marine.

While Mr. Farrell did not him- self propose a comprehensive mari- time policy for adoption by the Re- publican and Democratic parties, he did offer three suggestions for inclu- sion in a platform plant to enhance the nation's maritime assets.

First, he issued an appeal for a constructive partnership between the federal government and the maritime industry, formed to fash- ion a modern maritime policy. This modern policy, he said "must incor- porate such things as technological development, regard for competi- tion, and fresh look at the whole spectrum of subsidies. Modern sub- sidy policy should encourage and reward innovation, productivity gains, and this enlightened society's insistence on protecting the well- being of workers and the environ- ment."

Second, he called for the next

President to appoint a maritime czar, with Cabinet-level rank in the executive branch to lead the development of a modern maritime policy. This official would report directly to the President. Mr. Far- rell cautioned that such an ap- pointment would only be successful if it were backed by the full commit- ment and resolve of the President of the United States to preserve the merchant marine.

Third, he called for sweeping re- form of the regulatory machinery of the federal government, including the establishment of an appellate body, perhaps in the Office of Man- agement and Budget (OMB), to which industry could turn for review of regulatory agency activity, and for the institution of sunset provi- sions for outdated regulations. He pointed out a number of "mindless regulations," recently imposed on the industry, that he termed "exam- ples of regulations that should never be issued by a responsible and re- sponsive government." He stated that an appeals group in OMB "would draw to the attention of the appropriate Cabinet Secretary and proposals that they judged egre- gious. This approach would at least give foolishness no place to hide,"

Mr. Farrell concluded his ad- dress by exhorting industry leaders to make the necessary sacrifices to join together and form an alliance with the federal government, to shape a modern maritime policy, "which will first protect this na- tion's future, but which will also be an investment in a future which will result in a cornucopia of benefits for all."

The seventh international confer- ence, symposia and exhibition of

Offshore Mechanics and Arctic en- gineering (OMAE) will be held at the Adam's Mark Hotel in Houston,

For full details, and a copy of the program, write Dr. Jin S. Chung,

One is a new digitized daylight bright radar, FR-8030D, that packs a lot of performance features and a full 12-inch diagonal CRT into a cabinet only 13.3 inches wide. While the model number might indicate that this radar is a "little brother" to the FR800D Series unit, it is real- ly more of a "big brother" to the

FR-600 Series. The screen is dra- matically larger than the 600's and presents the same number of scan lines and high definition as the larg- er radars, yet is available at a far more cost-effective price.

The FR-8030D uses four levels of quantization to assure a bright, crisp picture for superb target de- tection. All operational data is dis- played on the screen for maximum user convenience.

Output power is 3 kw, with eight range scales from lA to 48 n.m.

For more information and free lit- erature on the FR-8030D,

Furuno's new high-performance color video plotter, the GD-180, is a 12-inch, eight-color video plotter that presents one of the clearest, sharpest, most comprehensive plot pictures in the industry, with more than 5,000 pixels per square inch. A built-in 3.5-inch floppy disk drive has the capacity to store up to sev- enty 2,000-point digitized charts, and the system provides free selec- tion of seven plotting colors and full remote control of all functions.

GD-180 users may enter as many as 1,000 distinctive marks, made up of any mix of 10 different standard marks, event marks from external navigation equipment, and marks associated with connecting lines. In addition, two circular or parallel- line alarm zones, 100 waypoints, 30 satellite fixes, a destination point, 10 danger points, and two-digit nu- merical time, temperature, or depth notation may be added along the courseline.

Waypoint entry can be in the user's choice of L/L, TDs, range/ bearing, own ship position, event mark, or from an external nav re- ceiver that provides Furuno CIF or appropriate NMEA 0183 output. A unique feature of the GD-180 is that more than one nav receiver may be connected and, if one fails, it will automatically switch to an alternate in user-selected priority order.

For additional information and free full-color literature on the GD- 180,

It can provide, with optional sen- sor, a historical temperature plot covering the range from 23 to 86° F on the lower third of the CRT. Or, it can interface with onboard loran or sat nav receivers functioning as a video plotter complete with present position, track plot, event marks, present and past waypoints, range/ bearing to waypoint, and present time, as well as position, depth, tem- perature and time data for past waypoints.

In the sounder mode, the FCV- 552 provides 19 basic ranges to 3,000 feet, from which the user can prese- lect any six frequently used scales.

Additionally, the unit can be phased in 1- or 10-foot steps across the entire range and there are six select- able bottom lock ranges.

Operators may choose from six different display modes that include any combination of high, low, or mixed frequencies and bottom lock.

The FCV-552 uses a single trans- ducer for both the 50 and 200 kHz operating frequencies. It has inter- nal memory to store a full page of data in any mode, alarms for fish, bottom, midlayer, or temperature, it stores up to 16 events, and operates from a universal 11-40 VDC power supply drawing just 50 W.

Furuno's new FCV-552 has the performance features for complete

Titovo Brodogradiliste of Kralje- viva, Yugoslavia, has received an order from Lys-Line A/S to con- struct a 3,400-dwt liner for service between Norway and Ireland.

Under the contract, the vessel is expected to be delivered in late 1989. 6 Maritime Reporter/Engineering News