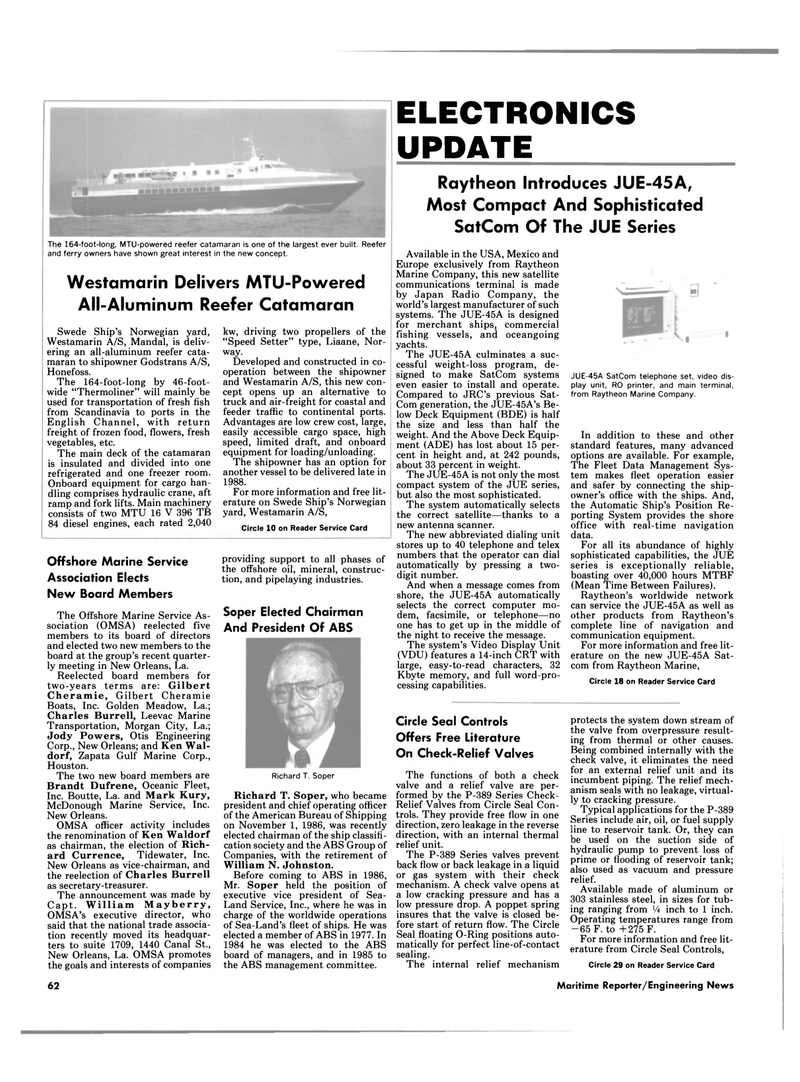 Most Compact And Sophisticated

SatCom Of The JUE Series

The 164-foot-long, MTU-powered reefer catamaran is one of the largest ever built. Reefer and ferry owners have shown great interest in the new concept.

The main deck of the catamaran is insulated and divided into one refrigerated and one freezer room.

Developed and constructed in co- operation between the shipowner and Westamarin A/S, this new con- cept opens up an alternative to truck and air-freight for coastal and feeder traffic to continental ports.

The shipowner has an option for another vessel to be delivered late in 1988.

The Offshore Marine Service As- sociation (OMSA) reelected five members to its board of directors and elected two new members to the board at the group's recent quarter- ly meeting in New Orleans, La.

The two new board members are

New Orleans as vice-chairman, and the reelection of Charles Burrell as secretary-treasurer.

The announcement was made by

New Orleans, La. OMSA promotes the goals and interests of companies providing support to all phases of the offshore oil, mineral, construc- tion, and pipelaying industries.

And President Of ABS

Available in the USA, Mexico and

Marine Company, this new satellite communications terminal is made by Japan Radio Company, the world's largest manufacturer of such systems. The JUE-45A is designed for merchant ships, commercial fishing vessels, and oceangoing yachts.

The JUE-45A culminates a suc- cessful weight-loss program, de- signed to make SatCom systems even easier to install and operate.

Com generation, the JUE-45A's Be- low Deck Equipment (BDE) is half the size and less than half the weight. And the Above Deck Equip- ment (ADE) has lost about 15 per- cent in height and, at 242 pounds, about 33 percent in weight.

The JUE-45A is not only the most compact system of the JUE series, but also the most sophisticated.

The system automatically selects the correct satellite—thanks to a new antenna scanner.

The new abbreviated dialing unit stores up to 40 telephone and telex numbers that the operator can dial automatically by pressing a two- digit number.

And when a message comes from shore, the JUE-45A automatically selects the correct computer mo- dem, facsimile, or telephone—no one has to get up in the middle of the night to receive the message.

In addition to these and other standard features, many advanced options are available. For example,

For all its abundance of highly sophisticated capabilities, the JUE series is exceptionally reliable, boasting over 40,000 hours MTBF (Mean Time Between Failures).

Raytheon's worldwide network can service the JUE-45A as well as other products from Raytheon's complete line of navigation and communication equipment.

For more information and free lit- erature on the new JUE-45A Sat- com from Raytheon Marine,

Circle 18 on Reader Service Card protects the system down stream of the valve from overpressure result- ing from thermal or other causes.

Being combined internally with the check valve, it eliminates the need for an external relief unit and its incumbent piping. The relief mech- anism seals with no leakage, virtual- ly to cracking pressure.

Typical applications for the P-389

Series include air, oil, or fuel supply line to reservoir tank. Or, they can be used on the suction side of hydraulic pump to prevent loss of prime or flooding of reservoir tank; also used as vacuum and pressure relief.

Available made of aluminum or 303 stainless steel, in sizes for tub- ing ranging from lA inch to 1 inch.

Richard T. Soper, who became president and chief operating officer of the American Bureau of Shipping on November 1, 1986, was recently elected chairman of the ship classifi- cation society and the ABS Group of

Companies, with the retirement of

Land Service, Inc., where he was in charge of the worldwide operations of Sea-Land's fleet of ships. He was elected a member of ABS in 1977. In 1984 he was elected to the ABS board of managers, and in 1985 to the ABS management committee.

Relief Valves from Circle Seal Con- trols. They provide free flow in one direction, zero leakage in the reverse direction, with an internal thermal relief unit.

The P-389 Series valves prevent back flow or back leakage in a liquid or gas system with their check mechanism. A check valve opens at a low cracking pressure and has a low pressure drop. A poppet spring insures that the valve is closed be- fore start of return flow. The Circle