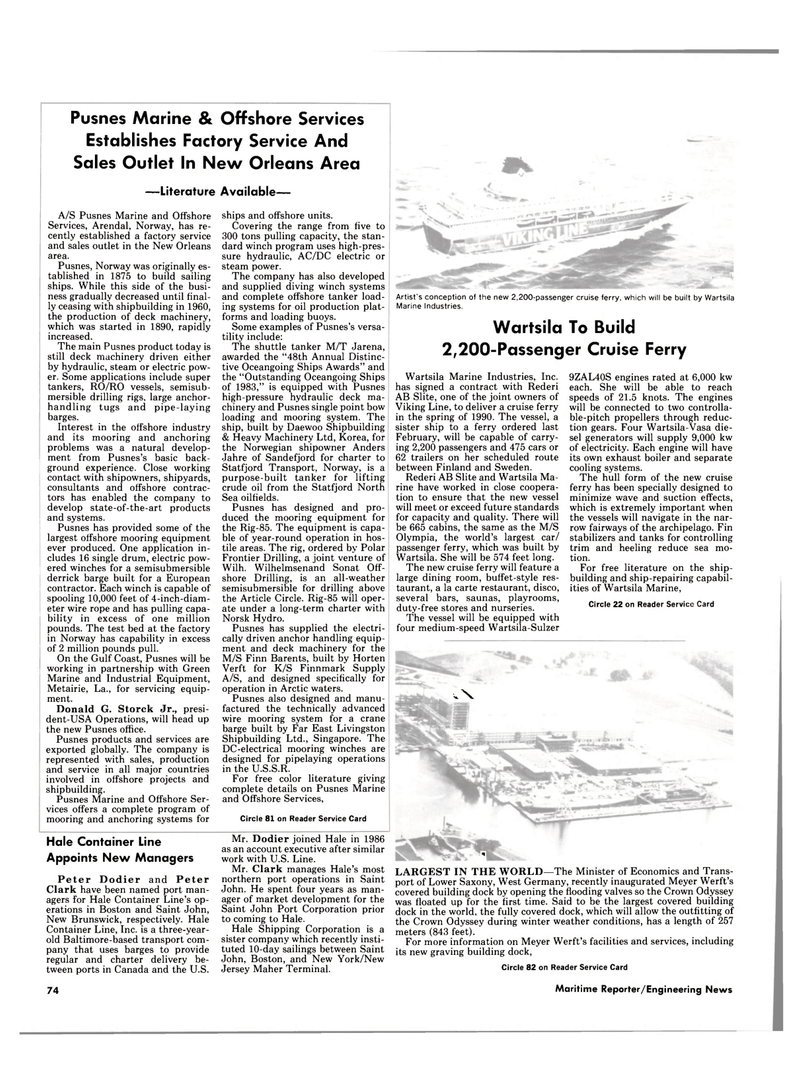 Services, Arendal, Norway, has re- cently established a factory service and sales outlet in the New Orleans area.

Pusnes, Norway was originally es- tablished in 1875 to build sailing ships. While this side of the busi- ness gradually decreased until final- ly ceasing with shipbuilding in 1960, the production of deck machinery, which was started in 1890, rapidly increased.

Interest in the offshore industry and its mooring and anchoring problems was a natural develop- ment from Pusnes's basic back- ground experience. Close working contact with shipowners, shipyards, consultants and offshore contrac- tors has enabled the company to develop state-of-the-art products and systems.

Pusnes has provided some of the largest offshore mooring equipment ever produced. One application in- cludes 16 single drum, electric pow- ered winches for a semisubmersible derrick barge built for a European contractor. Each winch is capable of spooling 10,000 feet of 4-inch-diam- eter wire rope and has pulling capa- bility in excess of one million pounds. The test bed at the factory in Norway has capability in excess of 2 million pounds pull.

On the Gulf Coast, Pusnes will be working in partnership with Green

Pusnes products and services are exported globally. The company is represented with sales, production and service in all major countries involved in offshore projects and shipbuilding.

Pusnes Marine and Offshore Ser- vices offers a complete program of mooring and anchoring systems for ships and offshore units.

Statfjord Transport, Norway, is a purpose-built tanker for lifting crude oil from the Statfjord North

Pusnes has designed and pro- duced the mooring equipment for the Rig-85. The equipment is capa- ble of year-round operation in hos- tile areas. The rig, ordered by Polar

Frontier Drilling, a joint venture of

Wilh. Wilhelmsenand Sonat Off- shore Drilling, is an all-weather semisubmersible for drilling above the Article Circle. Rig-85 will oper- ate under a long-term charter with

A/S, and designed specifically for operation in Arctic waters.

DC-electrical mooring winches are designed for pipelaying operations in the U.S.S.R.

Container Line, Inc. is a three-year- old Baltimore-based transport com- pany that uses barges to provide regular and charter delivery be- tween ports in Canada and the U.S.

Artist's conception of the new 2,200-passenger cruise ferry, which will be built by Wartsila

Wartsila Marine Industries, Inc. has signed a contract with Rederi

AB Slite, one of the joint owners of

Viking Line, to deliver a cruise ferry in the spring of 1990. The vessel, a sister ship to a ferry ordered last

February, will be capable of carry- ing 2,200 passengers and 475 cars or 62 trailers on her scheduled route between Finland and Sweden.

Rederi AB Slite and Wartsila Ma- rine have worked in close coopera- tion to ensure that the new vessel will meet or exceed future standards for capacity and quality. There will be 665 cabins, the same as the M/S

Olympia, the world's largest car/ passenger ferry, which was built by

The vessel will be equipped with four medium-speed Wartsila-Sulzer 9ZAL40S engines rated at 6,000 kw each. She will be able to reach speeds of 21.5 knots. The engines will be connected to two controlla- ble-pitch propellers through reduc- tion gears. Four Wartsila-Vasa die- sel generators will supply 9,000 kw of electricity. Each engine will have its own exhaust boiler and separate cooling systems.

The hull form of the new cruise ferry has been specially designed to minimize wave and suction effects, which is extremely important when the vessels will navigate in the nar- row fairways of the archipelago. Fin stabilizers and tanks for controlling trim and heeling reduce sea mo- tion.

For free literature on the ship- building and ship-repairing capabil- ities of Wartsila Marine,

Mr. Dodier joined Hale in 1986 as an account executive after similar work with U.S. Line.

John. He spent four years as man- ager of market development for the

Saint John Port Corporation prior to coming to Hale.

LARGEST IN THE WORLD—The Minister of Economics and Trans- port of Lower Saxony, West Germany, recently inaugurated Meyer Werft's covered building dock by opening the flooding valves so the Crown Odyssey was floated up for the first time. Said to be the largest covered building dock in the world, the fully covered dock, which will allow the outfitting of the Crown Odyssey during winter weather conditions, has a length of 257 meters (843 feet).

For more information on Meyer Werft's facilities and services, including its new graving building dock,