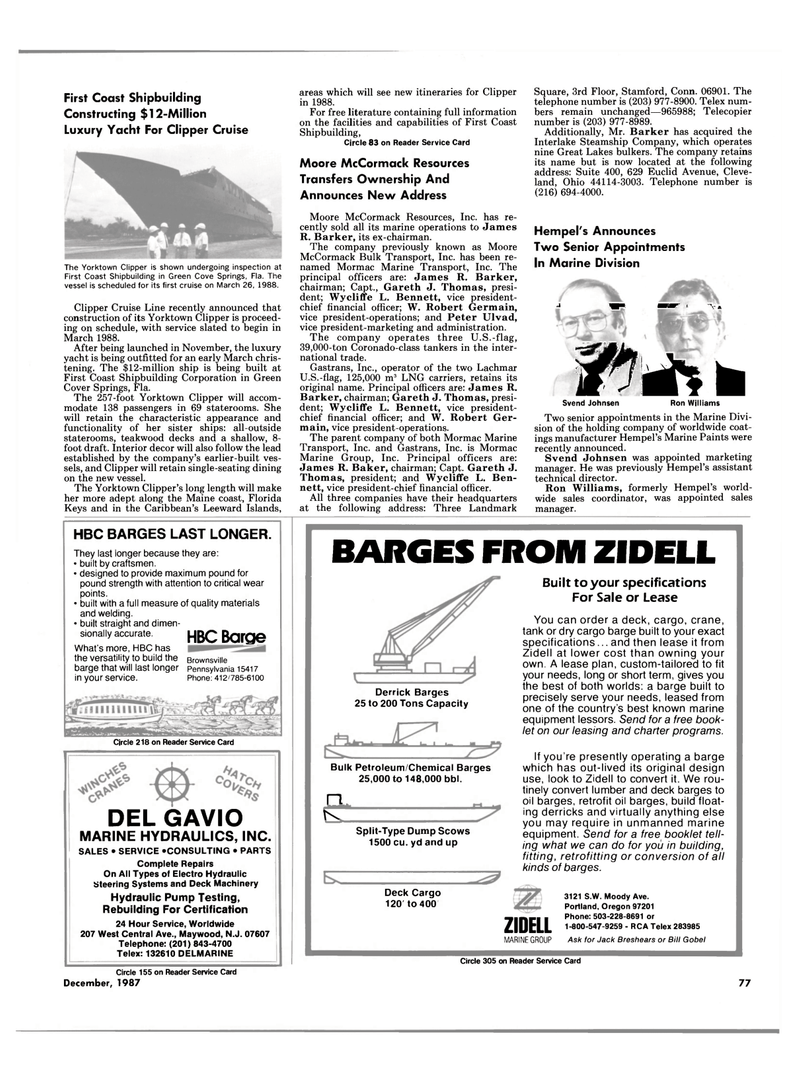 The Yorktown Clipper is shown undergoing inspection at

First Coast Shipbuilding in Green Cove Springs, Fla. The vessel is scheduled for its first cruise on March 26, 1988.

Clipper Cruise Line recently announced that construction of its Yorktown Clipper is proceed- ing on schedule, with service slated to begin in

After being launched in November, the luxury yacht is being outfitted for an early March chris- tening. The $12-million ship is being built at

The 257-foot Yorktown Clipper will accom- modate 138 passengers in 69 staterooms. She will retain the characteristic appearance and functionality of her sister ships: all-outside staterooms, teakwood decks and a shallow, 8- foot draft. Interior decor will also follow the lead established by the company's earlier-built ves- sels, and Clipper will retain single-seating dining on the new vessel.

The Yorktown Clipper's long length will make her more adept along the Maine coast, Florida

Keys and in the Caribbean's Leeward Islands, areas which will see new itineraries for Clipper in 1988.

Moore McCormack Resources, Inc. has re- cently sold all its marine operations to James

The company previously known as Moore

The parent company of both Mormac Marine

All three companies have their headquarters at the following address: Three Landmark

Additionally, Mr. Barker has acquired the

They last longer because they are: • built by craftsmen. • designed to provide maximum pound for pound strength with attention to critical wear points. • built with a full measure of quality materials and welding. • built straight and dimen- sionally accurate.

What's more, HBC has the versatility to build the barge that will last longer in your service.

On All Types of Electro Hydraulic

Built to your specifications

For Sale or Lease

You can order a deck, cargo, crane, tank or dry cargo barge built to your exact specifications... and then lease it from

Zidell at lower cost than owning your own. A lease plan, custom-tailored to fit your needs, long or short term, gives you the best of both worlds: a barge built to precisely serve your needs, leased from one of the country's best known marine equipment lessors. Send for a free book- let on our leasing and charter programs.

If you're presently operating a barge which has out-lived its original design use, look to Zidell to convert it. We rou- tinely convert lumber and deck barges to oil barges, retrofit oil barges, build float- ing derricks and virtually anything else you may require in unmanned marine equipment. Send for a free booklet tell- ing what we can do for you in building, fitting, retrofitting or conversion of all kinds of barges. 3121 S.W. Moody Ave.