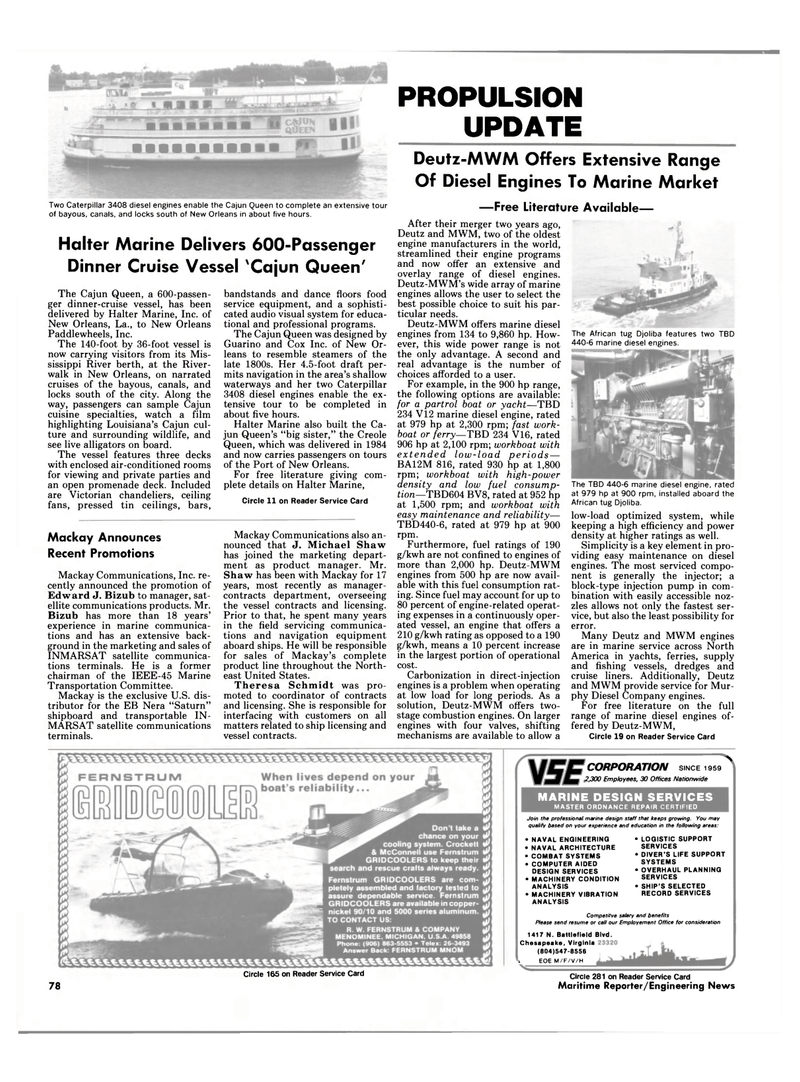 The Cajun Queen, a 600-passen- ger dinner-cruise vessel, has been delivered by Halter Marine, Inc. of

The 140-foot by 36-foot vessel is now carrying visitors from its Mis- sissippi River berth, at the River- walk in New Orleans, on narrated cruises of the bayous, canals, and locks south of the city. Along the way, passengers can sample Cajun cuisine specialties, watch a film highlighting Louisiana's Cajun cul- ture and surrounding wildlife, and see live alligators on board.

The Cajun Queen was designed by

Guarino and Cox Inc. of New Or- leans to resemble steamers of the late 1800s. Her 4.5-foot draft per- mits navigation in the area's shallow waterways and her two Caterpillar 3408 diesel engines enable the ex- tensive tour to be completed in about five hours.

Queen, which was delivered in 1984 and now carries passengers on tours of the Port of New Orleans.

Mackay Communications, Inc. re- cently announced the promotion of

INMARSAT satellite communica- tions terminals. He is a former chairman of the IEEE-45 Marine

Mackay is the exclusive U.S. dis- tributor for the EB Nera "Saturn" shipboard and transportable IN-

Shaw has been with Mackay for 17 years, most recently as manager- contracts department, overseeing the vessel contracts and licensing.

Prior to that, he spent many years in the field servicing communica- tions and navigation equipment aboard ships. He will be responsible for sales of Mackay's complete product line throughout the North- east United States.

Theresa Schmidt was pro- moted to coordinator of contracts and licensing. She is responsible for interfacing with customers on all matters related to ship licensing and vessel contracts.

Two Caterpillar 3408 diesel engines enable the Cajun Queen to complete an extensive tour of bayous, canals, and locks south of New Orleans in about five hours.

After their merger two years ago,

Deutz and MWM, two of the oldest engine manufacturers in the world, streamlined their engine programs and now offer an extensive and overlay range of diesel engines.

Deutz-MWM offers marine diesel engines from 134 to 9,860 hp. How- ever, this wide power range is not the only advantage. A second and real advantage is the number of choices afforded to a user.

Furthermore, fuel ratings of 190 g/kwh are not confined to engines of more than 2,000 hp. Deutz-MWM engines from 500 hp are now avail- able with this fuel consumption rat- ing. Since fuel may account for up to 80 percent of engine-related operat- ing expenses in a continuously oper- ated vessel, an engine that offers a 210 g/kwh rating as opposed to a 190 g/kwh, means a 10 percent increase in the largest portion of operational cost.

Carbonization in direct-injection engines is a problem when operating at low load for long periods. As a solution, Deutz-MWM offers two- stage combustion engines. On larger engines with four valves, shifting mechanisms are available to allow a low-load optimized system, while keeping a high efficiency and power density at higher ratings as well.

Simplicity is a key element in pro- viding easy maintenance on diesel engines. The most serviced compo- nent is generally the injector; a block-type injection pump in com- bination with easily accessible noz- zles allows not only the fastest ser- vice, but also the least possibility for error.

Many Deutz and MWM engines are in marine service across North

For free literature on the full range of marine diesel engines of- fered by Deutz-MWM,

Join the professional marine design staff that keeps growing. You may qualify based on your experience and education in the following areas: • NAVAL ENGINEERING • NAVAL ARCHITECTURE • COMBAT SYSTEMS • COMPUTER AIDED