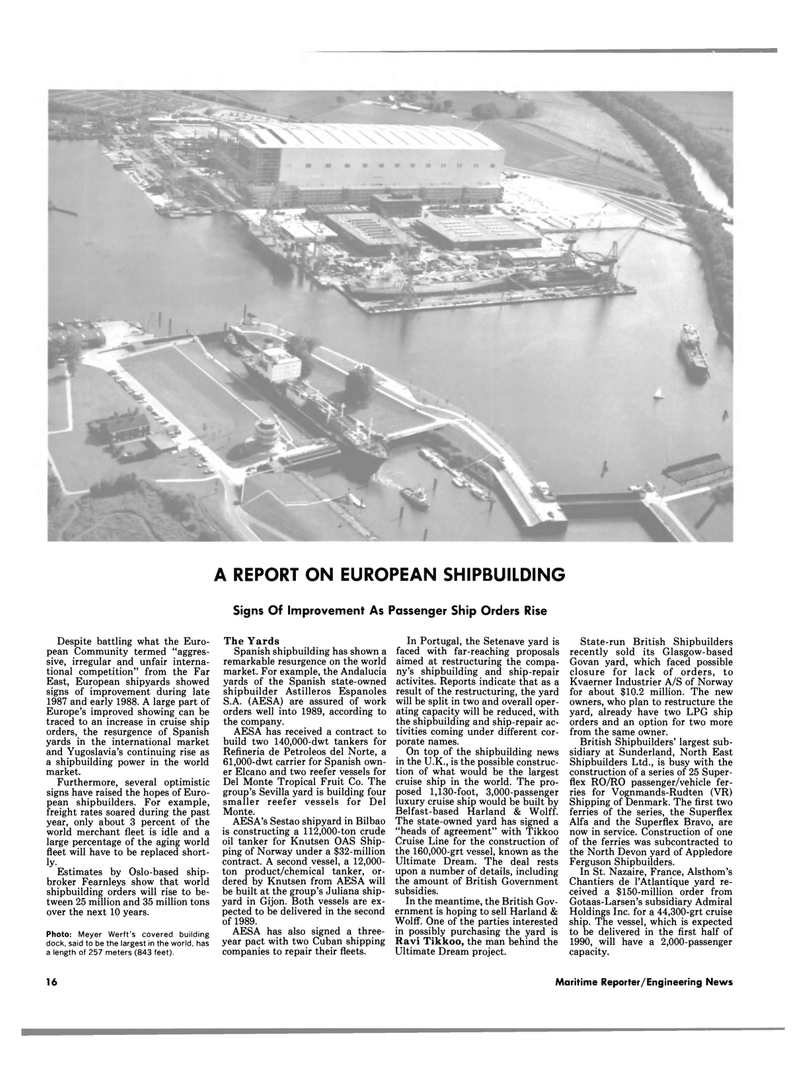 A REPORT ON EUROPEAN SHIPBUILDING

Despite battling what the Euro- pean Community termed "aggres- sive, irregular and unfair interna- tional competition" from the Far

East, European shipyards showed signs of improvement during late 1987 and early 1988. A large part of

Europe's improved showing can be traced to an increase in cruise ship orders, the resurgence of Spanish yards in the international market and Yugoslavia's continuing rise as a shipbuilding power in the world market.

Furthermore, several optimistic signs have raised the hopes of Euro- pean shipbuilders. For example, freight rates soared during the past year, only about 3 percent of the world merchant fleet is idle and a large percentage of the aging world fleet will have to be replaced short- ly.

Estimates by Oslo-based ship- broker Fearnleys show that world shipbuilding orders will rise to be- tween 25 million and 35 million tons over the next 10 years.

Photo: Meyer Werft's covered building dock, said to be the largest in the world, has a length of 257 meters (843 feet).

Signs Of Improvement As

Spanish shipbuilding has shown a remarkable resurgence on the world market. For example, the Andalucia yards of the Spanish state-owned shipbuilder Astilleros Espanoles

S.A. (AESA) are assured of work orders well into 1989, according to the company.

AESA has received a contract to build two 140,000-dwt tankers for

AESA's Sestao shipyard in Bilbao is constructing a 112,000-ton crude oil tanker for Knutsen OAS Ship- ping of Norway under a $32-million contract. A second vessel, a 12,000- ton product/chemical tanker, or- dered by Knutsen from AESA will be built at the group's Juliana ship- yard in Gijon. Both vessels are ex- pected to be delivered in the second of 1989.

In Portugal, the Setenave yard is faced with far-reaching proposals aimed at restructuring the compa- ny's shipbuilding and ship-repair activites. Reports indicate that as a result of the restructuring, the yard will be split in two and overall oper- ating capacity will be reduced, with the shipbuilding and ship-repair ac- tivities coming under different cor- porate names.

On top of the shipbuilding news in the U.K., is the possible construc- tion of what would be the largest cruise ship in the world. The pro- posed 1,130-foot, 3,000-passenger luxury cruise ship would be built by

Cruise Line for the construction of the 160,000-grt vessel, known as the

Ultimate Dream. The deal rests upon a number of details, including the amount of British Government subsidies.

In the meantime, the British Gov- ernment is hoping to sell Harland &

Wolff. One of the parties interested in possibly purchasing the yard is

Ravi Tikkoo, the man behind the

Govan yard, which faced possible closure for lack of orders, to

Kvaerner Industrier A/S of Norway for about $10.2 million. The new owners, who plan to restructure the yard, already have two LPG ship orders and an option for two more from the same owner.

Shipbuilders Ltd., is busy with the construction of a series of 25 Super- flex RO/RO passenger/vehicle fer- ries for Vognmands-Rudten (VR)

Shipping of Denmark. The first two ferries of the series, the Superflex

Alfa and the Superflex Bravo, are now in service. Construction of one of the ferries was subcontracted to the North Devon yard of Appledore

Chantiers de l'Atlantique yard re- ceived a $150-million order from

Holdings Inc. for a 44,300-grt cruise ship. The vessel, which is expected to be delivered in the first half of 1990, will have a 2,000-passenger capacity. 16 Maritime Reporter/Engineering News