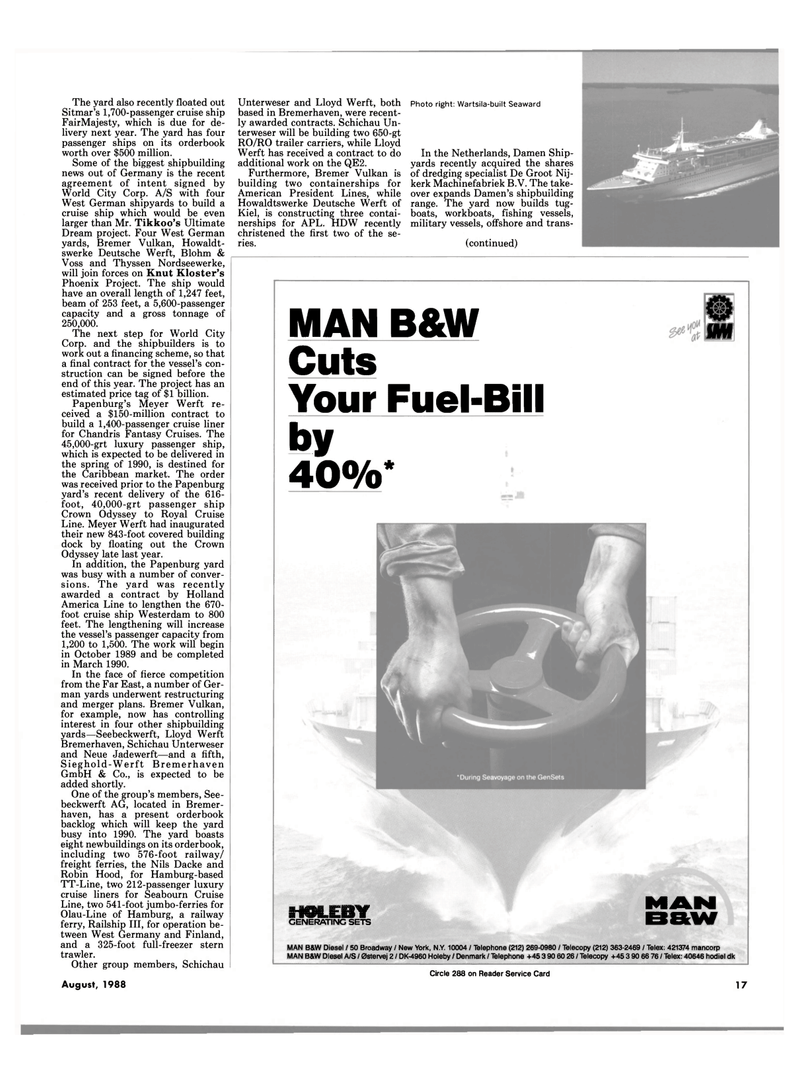 The yard also recently floated out

FairMajesty, which is due for de- livery next year. The yard has four passenger ships on its orderbook worth over $500 million.

West German shipyards to build a cruise ship which would be even larger than Mr. Tikkoo's Ultimate

Voss and Thyssen Nordseewerke, will join forces on Knut Kloster's

The next step for World City

Corp. and the shipbuilders is to work out a financing scheme, so that a final contract for the vessel's con- struction can be signed before the end of this year. The project has an estimated price tag of $1 billion.

Papenburg's Meyer Werft re- ceived a $150-million contract to build a 1,400-passenger cruise liner for Chandris Fantasy Cruises. The 45,000-grt luxury passenger ship, which is expected to be delivered in the spring of 1990, is destined for the Caribbean market. The order was received prior to the Papenburg yard's recent delivery of the 616- foot, 40,000-grt passenger ship

Line. Meyer Werft had inaugurated their new 843-foot covered building dock by floating out the Crown

In addition, the Papenburg yard was busy with a number of conver- sions. The yard was recently awarded a contract by Holland

America Line to lengthen the 670- foot cruise ship Westerdam to 800 feet. The lengthening will increase the vessel's passenger capacity from 1,200 to 1,500. The work will begin in October 1989 and be completed in March 1990.

In the face of fierce competition from the Far East, a number of Ger- man yards underwent restructuring and merger plans. Bremer Vulkan, for example, now has controlling interest in four other shipbuilding yards—Seebeckwerft, Lloyd Werft

GmbH & Co., is expected to be added shortly.

One of the group's members, See- beckwerft AG, located in Bremer- haven, has a present orderbook backlog which will keep the yard busy into 1990. The yard boasts eight newbuildings on its orderbook, including two 576-foot railway/ freight ferries, the Nils Dacke and

Olau-Line of Hamburg, a railway ferry, Railship III, for operation be- tween West Germany and Finland, and a 325-foot full-freezer stern trawler.

Unterweser and Lloyd Werft, both based in Bremerhaven, were recent- ly awarded contracts. Schichau Un- terweser will be building two 650-gt

Werft has received a contract to do additional work on the QE2.