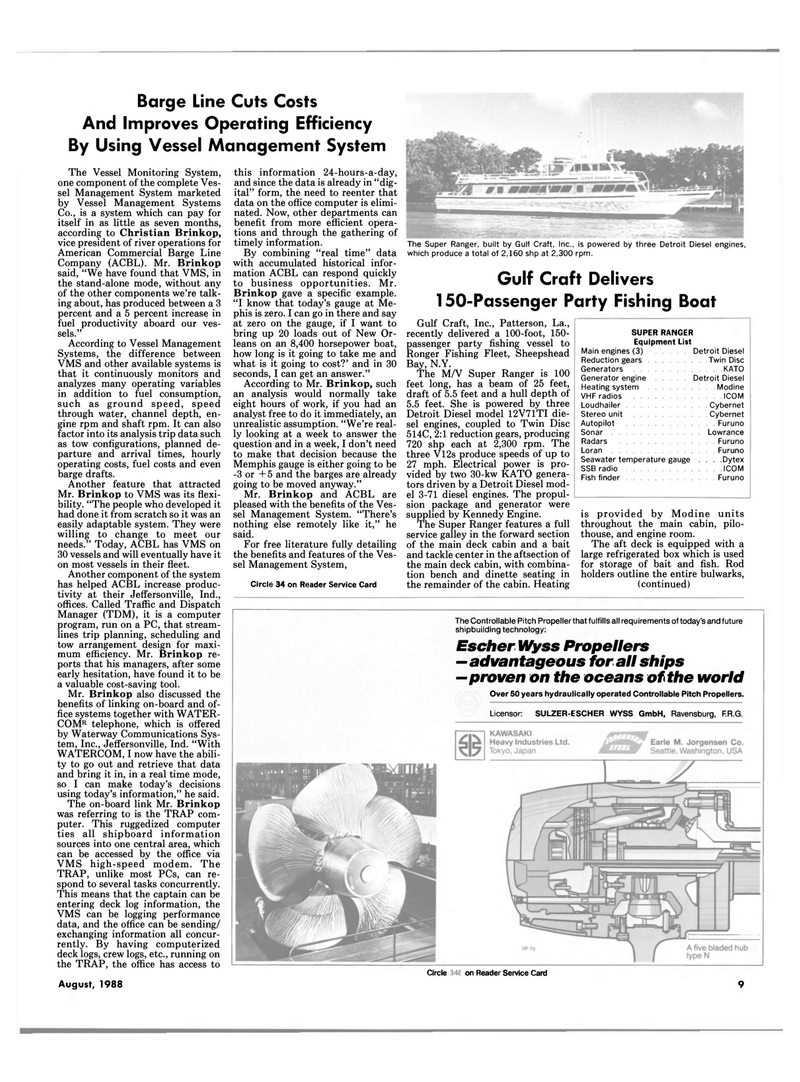 The Super Ranger, built by Gulf Craft, Inc., is powered by three Detroit Diesel engines, which produce a total of 2,160 shp at 2,300 rpm.

Co., is a system which can pay for itself in as little as seven months, according to Christian Brinkop, vice president of river operations for

Company (ACBL). Mr. Brinkop said, "We have found that VMS, in the stand-alone mode, without any of the other components we're talk- ing about, has produced between a 3 percent and a 5 percent increase in fuel productivity aboard our ves- sels."

According to Vessel Management

Systems, the difference between

VMS and other available systems is that it continuously monitors and analyzes many operating variables in addition to fuel consumption, such as ground speed, speed through water, channel depth, en- gine rpm and shaft rpm. It can also factor into its analysis trip data such as tow configurations, planned de- parture and arrival times, hourly operating costs, fuel costs and even barge drafts.

Another feature that attracted

Mr. Brinkop to VMS was its flexi- bility. "The people who developed it had done it from scratch so it was an easily adaptable system. They were willing to change to meet our needs." Today, ACBL has VMS on 30 vessels and will eventually have it on most vessels in their fleet.

Another component of the system has helped ACBL increase produc- tivity at their Jeffersonville, Ind., offices. Called Traffic and Dispatch

Manager (TDM), it is a computer program, run on a PC, that stream- lines trip planning, scheduling and tow arrangement design for maxi- mum efficiency. Mr. Brinkop re- ports that his managers, after some early hesitation, have found it to be a valuable cost-saving tool.

Mr. Brinkop also discussed the benefits of linking on-board and of- fice systems together with WATER-

WATERCOM, I now have the abili- ty to go out and retrieve that data and bring it in, in a real time mode, so I can make today's decisions using today's information," he said.

The on-board link Mr. Brinkop was referring to is the TRAP com- puter. This ruggedized computer ties all shipboard information sources into one central area, which can be accessed by the office via

TRAP, unlike most PCs, can re- spond to several tasks concurrently.

This means that the captain can be entering deck log information, the

VMS can be logging performance data, and the office can be sending/ exchanging information all concur- rently. By having computerized deck logs, crew logs, etc., running on the TRAP, the office has access to this information 24-hours-a-day, and since the data is already in "dig- ital" form, the need to reenter that data on the office computer is elimi- nated. Now, other departments can benefit from more efficient opera- tions and through the gathering of timely information.

Brinkop gave a specific example. "I know that today's gauge at Me- phis is zero. I can go in there and say at zero on the gauge, if I want to bring up 20 loads out of New Or- leans on an 8,400 horsepower boat, how long is it going to take me and what is it going to cost?' and in 30 seconds, I can get an answer."

According to Mr. Brinkop, such an analysis would normally take eight hours of work, if you had an analyst free to do it immediately, an unrealistic assumption. "We're real- ly looking at a week to answer the question and in a week, I don't need to make that decision because the

Memphis gauge is either going to be -3 or +5 and the barges are already going to be moved anyway."

Mr. Brinkop and ACBL are pleased with the benefits of the Ves- sel Management System. "There's nothing else remotely like it," he said.

For free literature fully detailing the benefits and features of the Ves- sel Management System,

The aft deck is equipped with a large refrigerated box which is used for storage of bait and fish. Rod holders outline the entire bulwarks, (continued)

The Controllable Pitch Propeller that fulfills all requirements of today's and future shipbuilding technology: