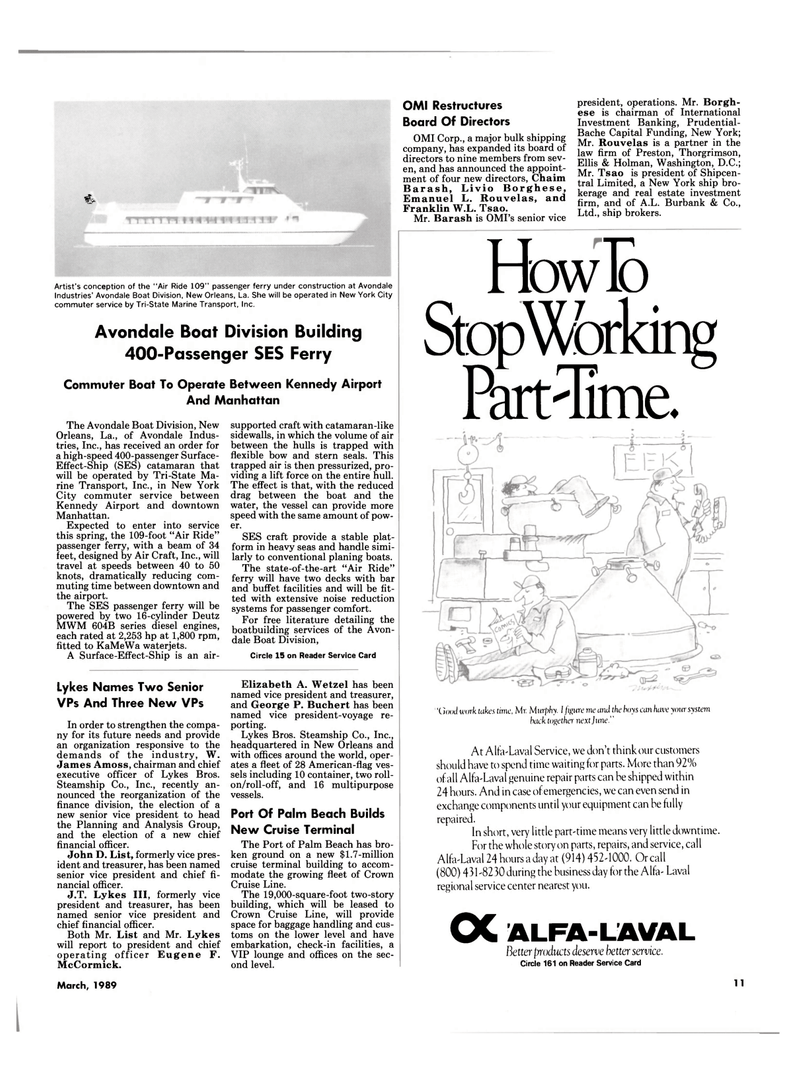 Orleans, La., of Avondale Indus- tries, Inc., has received an order for a high-speed 400-passenger Surface-

Effect-Ship (SES) catamaran that will be operated by Tri-State Ma- rine Transport, Inc., in New York

Expected to enter into service this spring, the 109-foot "Air Ride" passenger ferry, with a beam of 34 feet, designed by Air Craft, Inc., will travel at speeds between 40 to 50 knots, dramatically reducing com- muting time between downtown and the airport.

A Surface-Effect-Ship is an air- supported craft with catamaran-like sidewalls, in which the volume of air between the hulls is trapped with flexible bow and stern seals. This trapped air is then pressurized, pro- viding a lift force on the entire hull.

The effect is that, with the reduced drag between the boat and the water, the vessel can provide more speed with the same amount of pow- er.

The state-of-the-art "Air Ride" ferry will have two decks with bar and buffet facilities and will be fit- ted with extensive noise reduction systems for passenger comfort.

For free literature detailing the boatbuilding services of the Avon- dale Boat Division,

In order to strengthen the compa- ny for its future needs and provide an organization responsive to the demands of the industry, W.

Both Mr. List and Mr. Lykes will report to president and chief operating officer Eugene F.

The Port of Palm Beach has bro- ken ground on a new $1.7-million cruise terminal building to accom- modate the growing fleet of Crown

The 19,000-square-foot two-story building, which will be leased to

Crown Cruise Line, will provide space for baggage handling and cus- toms on the lower level and have embarkation, check-in facilities, a

VIP lounge and offices on the sec- ond level.

OMI Corp., a major bulk shipping company, has expanded its board of directors to nine members from sev- en, and has announced the appoint- ment of four new directors, Chaim

Mr. Rouvelas is a partner in the law firm of Preston, Thorgrimson,

Part^Eme. 'Good work takes time, Mr. Murphy. 1 figure me and the hoys can have your system hack together next June.''

At Alfa-Laval Service, we don't think our customers should have to spend time waiting for parts. More than 92% of all Alfa-Laval genuine repair parts can be shipped within 24 hours. And in case of emergencies, we can even send in exchange components until your equipment can be fully repaired.

For the whole story on parts, repairs, and service, call