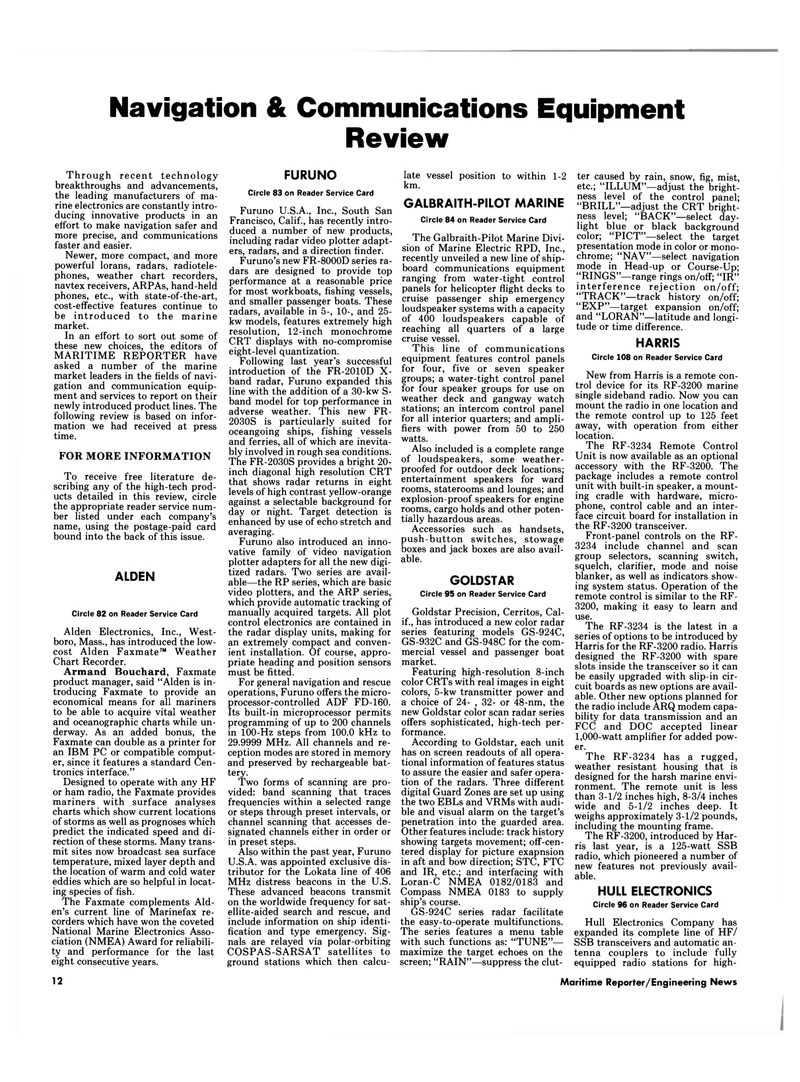 Through recent technology breakthroughs and advancements, the leading manufacturers of ma- rine electronics are constantly intro- ducing innovative products in an effort to make navigation safer and more precise, and communications faster and easier.

In an efFort to sort out some of these new choices, the editors of

MARITIME REPORTER have asked a number of the marine market leaders in the fields of navi- gation and communication equip- ment and services to report on their newly introduced product lines. The following review is based on infor- mation we had received at press time.

To receive free literature de- scribing any of the high-tech prod- ucts detailed in this review, circle the appropriate reader service num- ber listed under each company's name, using the postage-paid card bound into the back of this issue.

Armand Bouchard, Faxmate product manager, said "Alden is in- troducing Faxmate to provide an economical means for all mariners to be able to acquire vital weather and oceanographic charts while un- derway. As an added bonus, the

Faxmate can double as a printer for an IBM PC or compatible comput- er, since it features a standard Cen- tronics interface."

Designed to operate with any HF or ham radio, the Faxmate provides mariners with surface analyses charts which show current locations of storms as well as prognoses which predict the indicated speed and di- rection of these storms. Many trans- mit sites now broadcast sea surface temperature, mixed layer depth and the location of warm and cold water eddies which are so helpful in locat- ing species of fish.

Following last year's successful introduction of the FR-2010D X- band radar, Furuno expanded this line with the addition of a 30-kw S- band model for top performance in adverse weather. This new FR- 2030S is particularly suited for oceangoing ships, fishing vessels and ferries, all of which are inevita- bly involved in rough sea conditions.

The FR-2030S provides a bright 20- inch diagonal high resolution CRT that shows radar returns in eight levels of high contrast yellow-orange against a selectable background for day or night. Target detection is enhanced by use of echo stretch and averaging.

Furuno also introduced an inno- vative family of video navigation plotter adapters for all the new digi- tized radars. Two series are avail- able—the RP series, which are basic video plotters, and the ARP series, which provide automatic tracking of manually acquired targets. All plot control electronics are contained in the radar display units, making for an extremely compact and conven- ient installation. Of course, appro- priate heading and position sensors must be fitted.

Its built-in microprocessor permits programming of up to 200 channels in 100-Hz steps from 100.0 kHz to 29.9999 MHz. All channels and re- ception modes are stored in memory and preserved by rechargeable bat- tery.

Two forms of scanning are pro- vided: band scanning that traces frequencies within a selected range or steps through preset intervals, or channel scanning that accesses de- signated channels either in order or in preset steps.

Also within the past year, Furuno

U.S.A. was appointed exclusive dis- tributor for the Lokata line of 406

MHz distress beacons in the U.S.

These advanced beacons transmit on the worldwide frequency for sat- ellite-aided search and rescue, and include information on ship identi- fication and type emergency. Sig- nals are relayed via polar-orbiting

COSPAS-SARSAT satellites to ground stations which then calcu- late vessel position to within 1-2 km.

GS-932C and GS-948C for the com- mercial vessel and passenger boat market.

According to Goldstar, each unit has on screen readouts of all opera- tional information of features status to assure the easier and safer opera- tion of the radars. Three different digital Guard Zones are set up using the two EBLs and VRMs with audi- ble and visual alarm on the target's penetration into the guarded area.

New from Harris is a remote con- trol device for its RF-3200 marine single sideband radio. Now you can mount the radio in one location and the remote control up to 125 feet away, with operation from either location.

Unit is now available as an optional accessory with the RF-3200. The package includes a remote control unit with built-in speaker, a mount- ing cradle with hardware, micro- phone, control cable and an inter- face circuit board for installation in the RF-3200 transceiver.

Front-panel controls on the RF- 3234 include channel and scan group selectors, scanning switch, squelch, clarifier, mode and noise blanker, as well as indicators show- ing system status. Operation of the remote control is similar to the RF- 3200, making it easy to learn and use.

Harris for the RF-3200 radio. Harris designed the RF-3200 with spare slots inside the transceiver so it can be easily upgraded with slip-in cir- cuit boards as new options are avail- able. Other new options planned for the radio include ARQ modem capa- bility for data transmission and an

The RF-3234 has a rugged, weather resistant housing that is designed for the harsh marine envi- ronment. The remote unit is less than 3-1/2 inches high, 8-3/4 inches wide and 5-1/2 inches deep. It weighs approximately 3-1/2 pounds, including the mounting frame.

The RF-3200, introduced by Har- ris last year, is a 125-watt SSB radio, which pioneered a number of new features not previously avail- able.

Hull Electronics Company has expanded its complete line of HF/